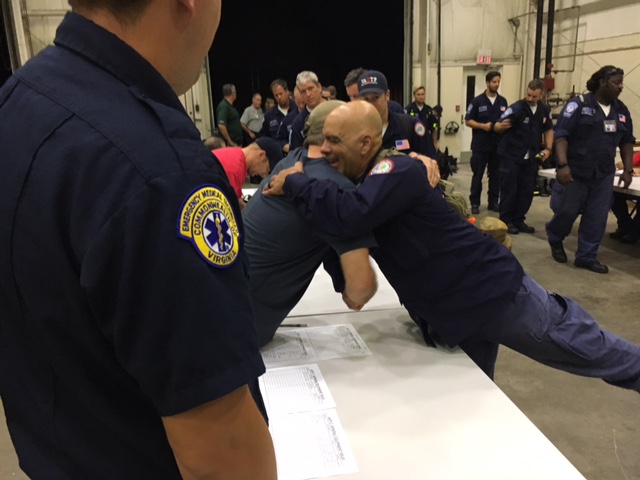 The team arrived at Norfolk International Airport around 2:30 a.m. and were transported by buses to the Virginia Beach Fire Training Center. They had originally met at the center before deploying to the Caribbean Sept. 4.

The task force had originally left for San Juan, but with Hurricane Irma making its way through the Caribbean, the task force was called to help in St. Thomas.

Typically the task force deploys right after a hurricane strikes, this time VA-TF2 was deployed just ahead of the storm’s arrival. This action was taken out of concern that Puerto Rico and the neighboring US Virginia Islands in Irma’s path would be inaccessible after the storm hit, delaying the response time for members of the FEMA Urban Search and Rescue Team.  After riding out the storm in a secure place, VA-TF2 went right to work.

VA-TF2 has been providing a variety of services to help those affected by Irma in the Caribbean and  is one of several FEMA Urban Search and Rescue Teams located across the nation.

The Virginia Beach Fire Department is the sponsoring agency for VA-TF2 but in addition to VBFD, firefighters from Chesapeake, Norfolk, Portsmouth, Hampton, Newport News, James City County and Williamsburg Fire Departments make up the team headed that are in Puerto Rico and the US Virgin Islands.

Three non-affiliated members of the task force include a doctor and canine handlers.  Combined, the task force members specialize in heavy / technical rescue, HAZMAT , water rescue, structural collapse, and all aspects of search and rescue operations.

“A lot of door to door searching homes completely pancaked or brought down to nothing and confirming there’s nobody in that rubble. That’s what we’re doing for the community,” said Chief Michael Barakey, the Assistant Team Leader of the Virginia Task Force 2.

The devastation is unlike what the team has seen before. Barakey said the islands look like a tornado slashed through them. Trees are snapped in the same place and so are cacti.

“That’s a new thing for our team, just seeing that wind damage where before we’re used to seeing, at Harvey, the heavy rain while we’re trying to rescue people,” said Barakey.

The task force had completed a variety of operation while deployed to the Caribbean.

The task force also had one other task while deployed in the Caribbean, which Barakey said stood out to him, when we spoke to him by phone before the team returned Saturday.

“There were two elderly people who were disabled in a completely devastated home. They had no food or water and could not move. So it took our team about 45 minutes to cut up the switch back to actually get to them. If we didn’t show up, I don’t how long it would have been until any of the locals got to them. So that’s a very proud moment for our team,” said Barakey.

All of the members of the team, including the two canines, returned in good health and in good spirits, said a release form the Virginia Beach Fire Department. The task force is currently on a 48 hour stand down.