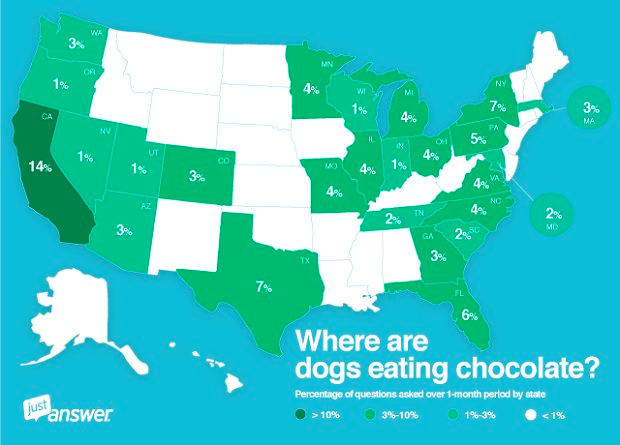 NORFOLK, Va. – According to the website JustAnswer, Virginia is ranked fifth in states with the most dogs ingesting marijuana.

JustAnswer is a website where pet owners can connect with veterinarians and other animal care professionals to ask questions concerning a variety of things that their pets may have done or consumed.

The website reviewed tens of thousands of “My dog ate” questions that it had gotten in the recent year, and saw it as a way to see what dogs are consuming other than the normal food and treats.

The study stated that only one percent of “My dog ate” questions where in reference to weed, but out of the percentage, California, New York, Illinois, Texas and Virginia top the list for dogs getting into the leafy greens.

The study was not centered around one item, it also showed a variety of things that dogs eat as well. Dogs swallowing pharmaceuticals out-numbered more than the 11 other categories combine. The second largest category included questions about dogs eating bones and dead animals.

“Fabric, undergarments, toys, stings or things in the environment as well like sticks. I’ve removed cat litter from a dog’s stomach but it seems like the most common thing is undergarments in my practice,” said Dr. Dwight Alleyne, DVM.

From January of 2015 to August of 2017, the number of questions about dogs eating potentially harmful items as a percentage of JustAnswer’s Pet category grew from about 25 percent to over 30 percent.