Local suicide prevention: One dad’s message to the community

NORFOLK, Va. - Suicide devastates families and takes lives every day. Now there is an effort throughout the month to reduce suicides.

Eric Peterson has endured a pain that no father should ever have to after his daughter committed suicide three weeks after her 15th birthday.

He said she lost her battle with depression in January of 2014.

“It's a journey you never want to go on and it's something you can't escape. Your life is changed forever and anyone that's had that kind of severe loss understands what that's like,” said Peterson.

Now his mission is to have a world without suicide.

He and his wife started the Sarah Michelle Foundation and earlier this week he spoke at O’Connor’s Brewery which was one of five places that hosted suicide prevention events in Norfolk.

“Suicide is very preventable. Depression is very treatable so one of the main things we want people to understand is to think about mental health like your physical health. Your brain is an organ. It can get sick,” said Peterson.

Peterson shared his experience with a room full of people at the brewery and talked about warning signs, what to say and what not to say to those suffering and how to get help.

“I feel like if we knew more and better equipped, we would've been able to help her more effectively and that's part of what we're trying to do, help people understand how they can assist someone that's having a mental health crisis,” said Peterson. “We want to prevent anyone else from going through what we've been through. That is our motivator that is our driver. It's so awful to lose a child and losing a loved one by suicide is a particular kind of loss that's very difficult.”

But now he said his purpose is to help others.

“It has its moments of intense loss but they're also moments of hope when you see that perhaps we can make some progress,” said Peterson.

Here is a list of events going on in Norfolk:

Talk About It Norfolk events

Healing our Heroes: The Science of Risk and Resilience for Military Mental Health 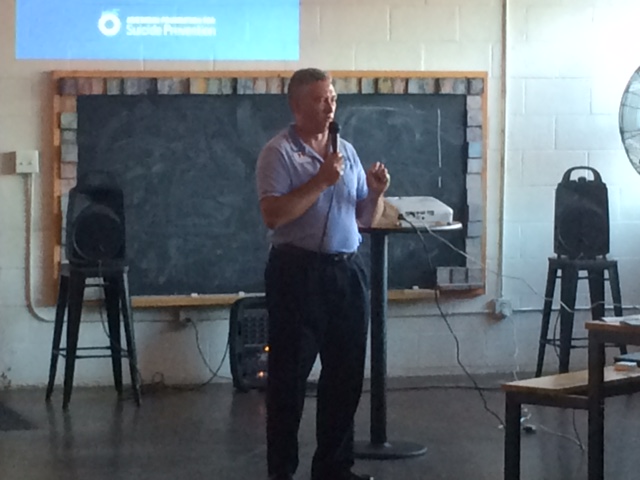