President Donald Trump, hours after visiting Puerto Rico to survey the damage wrought by Hurricane Maria, returns to the role of comforter-in-chief visiting Las Vegas Wednesday, days after what is believed to be the deadliest shooting in modern American history.

The visit marks Trump’s second trip to soothe national concerns in as many days, with the President scheduled to meet with local politicians, first responders and survivors of the shooting that killed 58 people and injured more than 500 others.

Trump is in search of a good news story when he visited Puerto Rico on Tuesday, giving himself high marks by touting the federal response even as millions in the island territory are without power and with few supplies. Trump’s briefing with local officials on the island was more reflective than prescriptive, and at times awkward.

Trump seeks to turn the page in Las Vegas, with plans to herald the police response to the massacre while promising Americans that steps are being taken to protect them from future attacks. 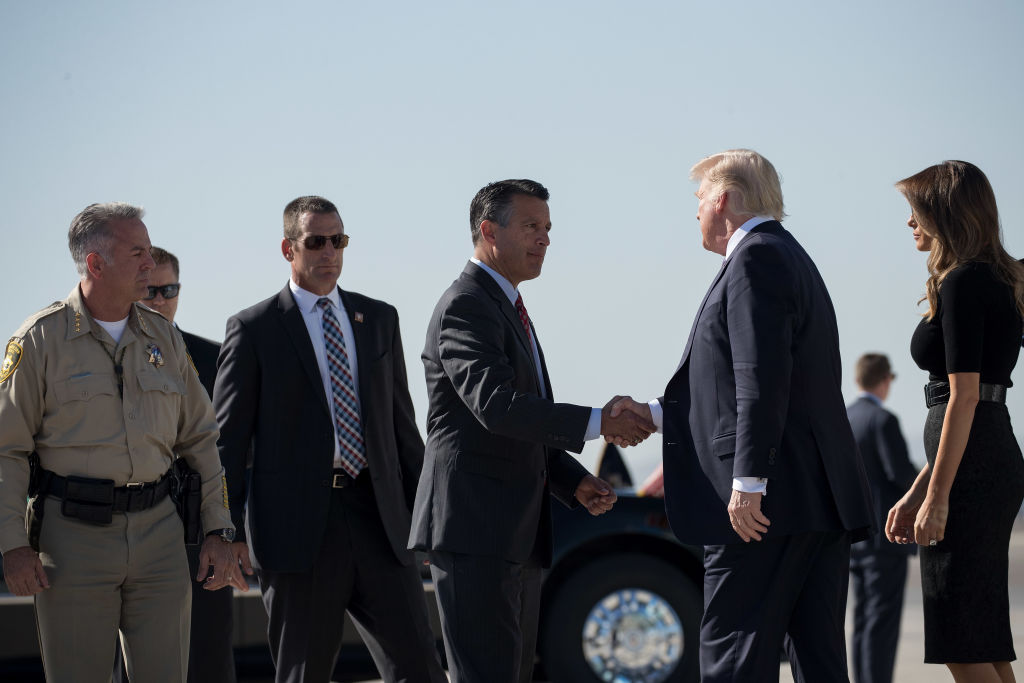 As he left the White House, Trump suggested that he may know more about the shooter in the Las Vegas than is currently publicly known.

“They’re learning a lot more and it’ll be announced at an appropriate time,” Trump said. “It’s a very, very sad day for me personally.”

The President did not elaborate on what law enforcement is learning about the shooter or answer a question about whether the shooter was radicalized.

Trump, a president whose tenure has been defined by self-inflicted division and dissension, struck a unifying tone after the Las Vegas shooting. In a somber speech from the White House on Monday, Trump urged togetherness.

“Our unity cannot be shattered by evil, our bonds cannot be broken by violence,” Trump said in an address delivered with a teleprompter. “And though we feel such great anger at the senseless murder of our fellow citizens, it is our love that defines us today — and always will, forever.”

The shooting, which happened during the headlining performance at a country music festival and left thousands running for their lives, briefly put Trump’s visit to Puerto Rico in jeopardy, White House aides told CNN. Trump, though, went through with the visit, and before leaving for Puerto Rico said the shooter in Las Vegas was a “very, very sick individual.”

“He was a sick man, a demented man,” Trump said. “We’re looking into him very, very seriously.”

Moments of tragedy, and the way former commanders in chief have responded to them, have defined the legacy of past presidents. Former Oval Office occupants have described the difficulty that comes with comforting those working through with the worst moments in their lives. Though Trump has stepped up to the task before, his visit Wednesday provides another test.

Trump’s initial remarks about the Las Vegas shooting tracked with past presidential pronouncements on tragedy, offering a reflection that empathized with those lost.

“We cannot fathom their pain, we cannot imagine their loss,” he said. “To the families of the victims, we are praying for you and we are here for you and we ask God to help see you through this very dark period.”

But Trump has shown the propensity to stay on message in speeches like the one he gave on Monday, while being his more off-the-cuff self during visits like the one he will have in Las Vegas.

Republicans have looked to avoid any discussion about gun control in the wake of the Las Vegas massacre, even as Democrats — spurred by the fact the shooter had over 40 firearms in his hotel and home — looked to push action on the availability of assault weapons.

Trump, asked aboard Air Force One Tuesday about whether he was open to a discussion on gun control, said: “At some point perhaps that will come. That’s not today.”

He will likely be met with similar questions when he visits Las Vegas on Wednesday.

Rep. Jacky Rosen, a Nevada Democrat, told CNN on Tuesday now is exactly the time for a conversation on guns.

Trump’s plea for time in the wake of the massacre is at odds with his past comments about violence. After a 2015 terrorist attack in San Bernardino, California, that killed 14 people, Trump quickly called for a “total and complete” ban on Muslims entering the United States.