At least 15 dead as fires rage in Northern California 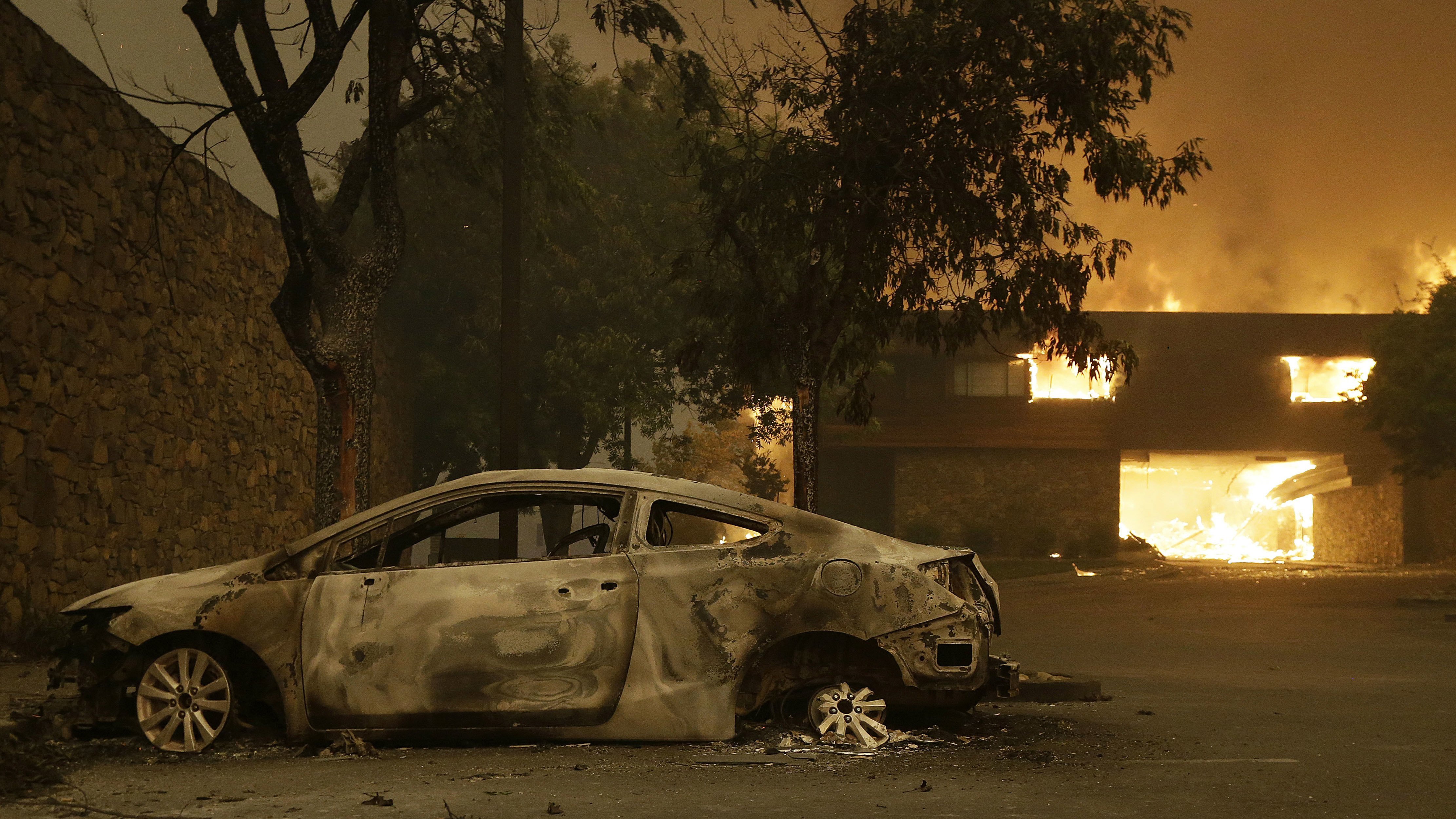 At least 15 people have died in the wildfires in California, Ken Pimlott, director of Cal Fire, said Tuesday.

It is too early to tell whether any of the wildfires were started by humans, Pimlott said. “All these fires are under investigation,” he told reporters, adding that his department was focusing on rescues and firefighting. “The chances are that (the cause) is lightning is fairly minimal.”

More than a dozen wildfires raged across Northern California for the third straight day Tuesday, with the biggest ones scorching the state’s famous wine country.

The largest fires were burning in Sonoma, Napa and Mendocino counties, with flames ripping through the lush, picturesque landscape.

Here’s what we know so far, according to California authorities.

• At least 15 people have died since Sunday night when most of the fires began.

• Two killed in Napa County were 100-year-old Charles Rippey and his wife, Sara, 98, Napa County spokeswoman Kristi Jourdan said. They died when a fire engulfed their home near the Silverado Country Club north of Napa, she said.

• About 1,500 homes and businesses have been destroyed by the three largest fires in Northern California alone, California Department of Forestry and Fire Protection spokesman Daniel Berlant said Tuesday.

• More than 100 people were being treated at Napa- and Sonoma-area hospitals for fire-related injuries or health issues, including burns, smoke inhalation and shortness of breath.

• Wildfires were burning more than 115,000 acres in California as of Tuesday morning.

• More than 100 phone calls have been made to Sonoma County’s missing persons hotline, the county said Monday.

• Most of the Northern California fires ignited Sunday night, driven by winds of more than 50 mph and dry conditions, Cal Fire Director Ken Pimlott said Monday. The high winds led to “extreme rates of spread and volatile burning conditions,” according to Cal Fire.

• Firefighters in Northern California appeared to be getting a break from the weather Tuesday. Winds decreased throughout the area — 6 to 13 mph was forecast around Santa Rosa.

Winds may pick up Tuesday night, and again on Wednesday night, but they won’t be as strong as they were Sunday, the National Weather Service said. “Winds and the fire weather threat will decrease Tuesday in the north, but a threat will remain in Southern California,” the weather service Tuesday.

The devastation was significant in Santa Rosa, a city of about 175,000 roughly 50 miles northwest of San Francisco. Fire leveled subdivisions and reduced cars and homes into burnt piles of ash and rubble.

“We got the news a couple hours late that (the house) was burning,” he said Monday.

Destroyed landmarks in the city included the Fountaingrove Inn, a 124-room hotel; a nearby event center, the Fountaingrove Round Barn; and classrooms at the Luther Burbank Center for the Arts, The (Santa Rosa) Press Democrat reported. One of Santa Rosa’s fire stations was also lost in the fire, according to a post on the Mountain View Fire Department’s Facebook account.

“I’m lucky,” Santa Rosa Mayor Chris Coursey said at a news conference Monday. “My house is fine. My family is fine. My city is not.”

A large part of Santa Rosa was evacuated, including Kaiser Permanente Hospital and Sutter Hospital. Authorities imposed a sundown-to-sunrise curfew for the northern and eastern parts of the city under evacuation orders.

“We are asking people to stay indoors” because of smoke, Alonso said.

The flames also destroyed the home of a man who has been helping to fight it.

Tom Welch, fire chief of Mill Valley just north of San Francisco, lives in Santa Rosa. Fire consumed his home as he was working to save other structures in the area; he and his family are safe, KGO reported.

Mill Valley residents and employees started a YouCaring.com fund-raiser to help the family; it had collected more than $46,000 by late Tuesday morning.

The biggest blaze was the Tubbs fire, at 27,000 acres, stretching from Santa Rosa in Sonoma County to the Calistoga area in Napa County.

That fire has destroyed at least 571 structures, Cal Fire said Tuesday, making it one of the top 15 most destructive fires in recorded California history.

In Sonoma County, firefighters battled the Tubbs fire in Santa Rosa, the Nuns fire at 5,000 acres and another fire that spread across 2,000 acres.

In Mendocino County, the Redwood Complex fire had burned at least 21,000 acres, as of Tuesday morning.

The Atlas fire destroyed several homes near the Silverado Country Club north of Napa, CNN affiliate KPIX reported, including the house where the Rippeys died.

Also in that area, fire burned the main building of the Signorello Estate Winery to the ground. Broken and charred wine bottles remained on seared metal shelves, video from KPIX showed.

The city of Napa, with about 80,000 residents, was not under evacuation. But parts of it were under a boil-water notice Tuesday, because fires destroyed a pump station near the Silverado resort and rendered a water treatment plant inoperable, the city said. Many in Napa also lost power and cell service, according to the Napa police.

Alison Crowe, the winemaker for Garnet Vineyards & Picket Fence Vineyards in Napa Valley, estimated two-thirds to three-fourths of the grape harvest already had taken place but said some grapes still haven’t been picked. The 2017 harvest will be remembered for this fire, she said.

Napa and Sonoma counties have the most wineries in California. The economic impact from the wine industry was estimated at $13 billion for each county, according to 2012 and 2014 research done by Stonebridge Research Group.

Winery owner Lauren Benward Krause said she saw flames approaching her Beltane Ranch property Monday night in Glen Ellen, southeast of Santa Rosa, while she was on the phone with a 911 operator.

“We evacuated kids and pets from the house first; then we sprayed everything we could with a garden hose before losing power and water,” she said. “It took all night.”

Quick action by firefighters and neighbors minimized damage at the vineyard and winery late Monday, though flames burned a storage building and a sheep barn, Krause said.

Neighbors helped her family move horses and cattle to safety, and a friend’s construction company delivered a truck of water.

She posted video to Instagram of a structure on the property in flames.

Karissa Kruse, president of the Sonoma County Winegrowers, said she has heard of winery losses in her county, but that the total impact won’t be known for some time as evacuations are still in place.

She lost her home in the fire after she evacuated at 2 a.m. Monday. She had 10 minutes to evacuate and came back later in the day to find her home gone.

Authorities have not said what caused the fires but noted windy and dry conditions Sunday and Monday made it easy for the fires to spread. October is typically the busiest month for wildfires in California, they said.

“We have folks on the fire line starting their third shift right now that have not been relieved,” Biermann said Tuesday morning, “because there’s folks not available to come in, with so many fires in the area.”

Pictures from Disneyland on Monday afternoon showed smoky conditions in the distance giving the sky an orange glow.

“These fires have destroyed structures and continue to threaten thousands of homes, necessitating the evacuation of thousands of residents,” the governor’s emergency proclamation said.