WILLIAMSBURG, Va. - The College of William & Mary is speaking out after it says flyers intended to harass and intimidate were posted around campus.

This week flyers appearing to be from U.S. Immigration and Customs Enforcement as well as others referencing the gender wage gap and calling affirmative action 'government-mandated racism' were discovered on campus.

Pictures surfaced online of the flyers hung inside Morton Hall, which is home of the school's Women's Studies program, Africana Studies and Equality Office. 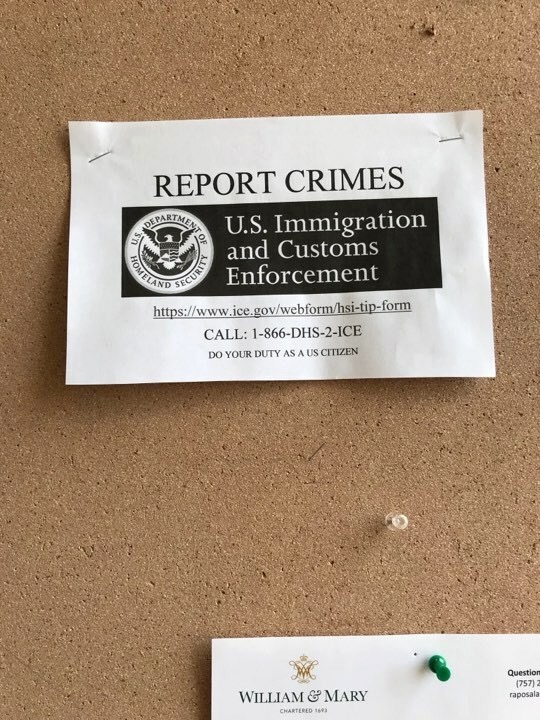 The school released the following statement on Wednesday:

"Dear William & Mary Community,
We became aware late yesterday that several flyers with messages intended to harass, intimidate or threaten segments of our community were posted anonymously to several campus bulletin boards. In at least two cases, the flyers were designed to appear as official communication from U.S. Immigration and Customs Enforcement — there is no evidence to suggest this is true. Some flyers were placed on bulletin boards near or belonging to offices/departments as if to appear as official university communications. They are not.

At this point we do not know whether the source of these postings was internal or external to William & Mary, but as a reminder to all, anonymous postings or those misrepresenting their source are prohibited by campus policy and will be removed. More importantly, the university stands with those who were targeted in the flyers. Anonymous aspersions have no place in our educational community.

If you observe or experience concerning behavior on campus, please contact the W&M Police at 221-4596 or refer to this on-line information about additional reporting options and resources.