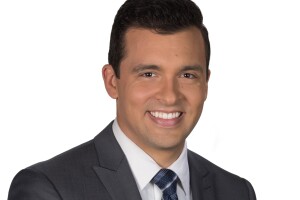 Anthony Sabella joined the WTKR News 3 team in December of 2016.

Anthony comes to Hampton Roads from WJRT in Flint, MI where he spent two years as a reporter covering a number of issues including Flint’s lead water crisis. His coverage helped earn his station an EMMY and regional Edward R. Murrow award. Anthony was also named the Associated Press of Michigan’s Rising Star in television news for 2015.

Before working in Flint, Anthony started his journalism career at WILX in Lansing, MI where he worked as a reporter, anchor and occasional fill-in sports reporter.

In case you haven’t figured it out yet…Anthony was born and raised in Michigan! He grew up with three younger brothers in a small town on the bay called New Baltimore and attended Michigan State University (Go GREEN!) where he played in the Spartan Marching Band and sang in an a cappella group, State of Fifths. Aca-believe it.

After years in ‘The Mitten’, Anthony is as excited as ever to be in Virginia! When he’s not at work you can find him singing in the car, hanging out with his wife and golden retriever on the beach or talking Spartan sports.

Anthony is passionate about his career in journalism because he loves telling people’s stories. One of his favorite things to do is meet new people and find out what makes them who they are and this career gives him that opportunity every day.

If you have any story ideas, restaurant suggestions or just want to say ‘hi’, you can reach out to him on his Facebook page (Anthony Sabella), Twitter (AnthonyWTKR) or email him at anthony.sabella@wtkr.com.