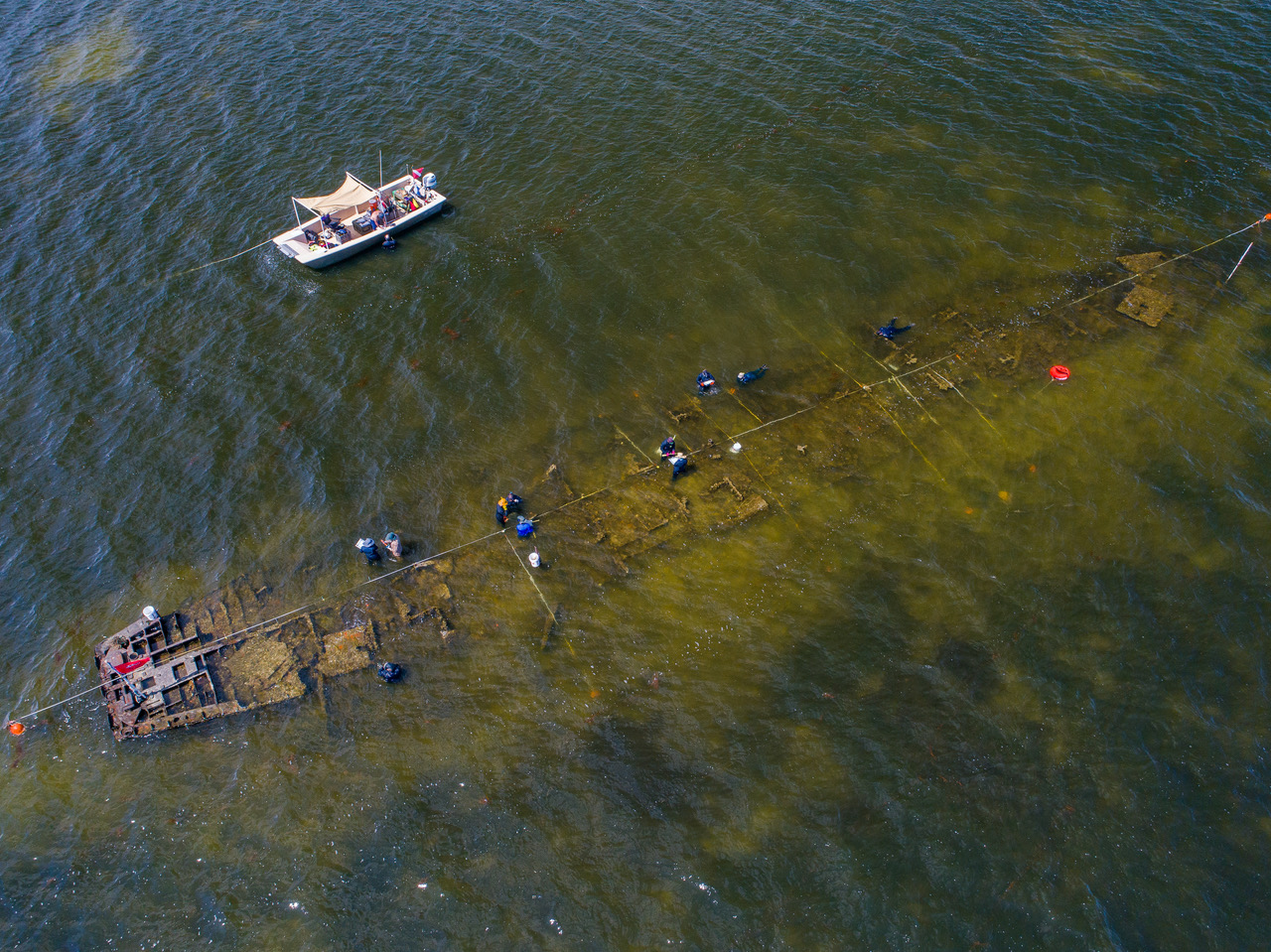 RODANTHE, N.C . – A forgotten gunboat has been re-discovered, the University of North Carolina announced Tuesday.

A team of ECU graduate students led by Dr. Nathan Richards has identified the Pappy’s Lane shipwreck in the Pamlico Sound near Rodanthe as a type of World War II gunboat.

The shipwreck was determined eligible for the National Register of Historic Places for its information potential in 2016.

Directly in the path of the planned Bonner Bridge extension project, the shipwreck’s identity remained a mystery for years, with local oral history suggesting it was a gravel barge that ran aground in the 1960s, the university release said.

While evidence supports a connection between its loss and the construction of roads on the Outer Banks in the 1960s, archaeological details suggest a very different original function.

With the support of the North Carolina Department of Transportation, Dr. Richards worked with nine graduate students in a month-long field school at the UNC Coastal Studies Institute to assess the site’s historical significance prior to the construction of the bridge.

“We began the field school armed with a significant amount of historical information about late nineteenth and early twentieth century ship types. We soon realized that the ship had a welded steel hull, and what we thought were rivets was some other diagnostic trait,” said Richards.  “Towards the end of the third week of field work, the evidence that the Pappy’s Lane Wreck was actually a military vessel became increasingly clear.”

Lack of historical leads made archaeological recording the driving force of discovery on the project. Dr. Richards and the graduate students spent nearly every day in September, on the site of the shipwreck recording the wreck and producing a map far more detailed than any made before it.

The North Carolina Department of Natural and Cultural Resources Underwater Archaeology Branch recommended limited archaeological excavation of the stern and three cross-sections of the ship to ascertain its function, allowing the team to determine the shape of the hull and other details about the vessel’s construction.

The university release said after mapping the site and dredging targeted areas, Dr. Richards and his students were able to match the stern and other diagnostic details to two related classes of World War II gunboats, Landing Craft Infantry (LCI) and Landing Craft Support (LCS) vessels. These watercraft, each built to the same blueprints but with some modifications, were introduced late into the Pacific Theater of World War II. Designed for amphibious warfare, they were specifically used to land and support troops on enemy beaches. With a crew of 71 men, LCIs and LCSs supported landings in the Philippines, Borneo, Iwo Jima, and Okinawa.

While most LCIs and LCSs were either scrapped or stayed in the Pacific for minesweeping and other various duties, many were transferred to foreign fleets, such as France, Vietnam, and Japan, as an effort to rebuild allied militaries destroyed in the war. They served less than two years for the United States during World War II, but some spent over two decades in the South Vietnamese Navy, serving as its first real warships.

By the 1980s, most were sold, scrapped, or converted to commercial fishing boats, leaving a single surviving LCS in the Thai navy, which ultimately returned to the United States as a floating museum in 2007, UNC said.

More research will need t be done to identity the specific type, name, and individual story of the Pappy’s Lane shipwreck. The time between its possible tenure in the Pacific Ocean and its life as an unassuming shipwreck in the Pamlico Sound spans decades, leaving much to uncover.

“We did not expect to find an American amphibious assault vessel lying in Pamlico Sound, so our research is continuing,” said Richards.  “We certainly appreciate the assistance of North Carolina’s Department of Transportation and Department of Natural and Cultural Resources to fully explore the historical and archaeological significance of the wreck, and hope to shed more light on the vessel by the end of the year.”