Can the kratom plant help fix the opioid crisis? 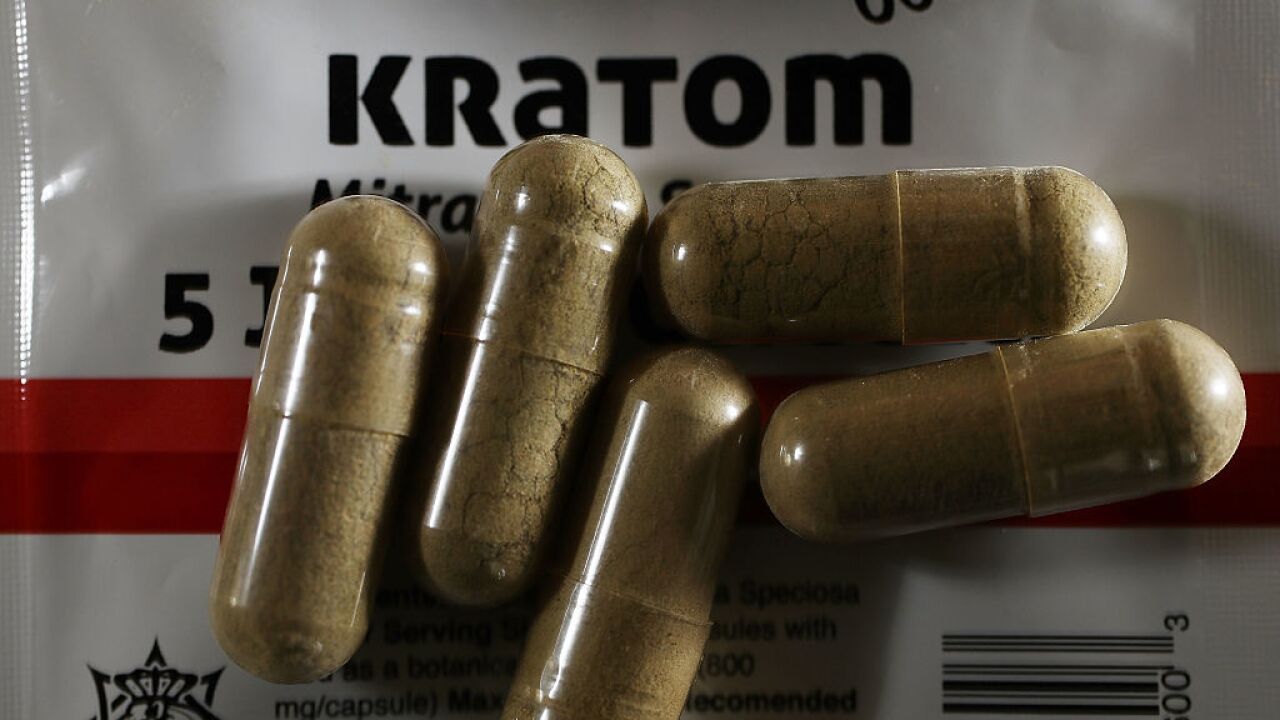 MIAMI, FL – MAY 10: In this photo illustration, capsules of the drug Kratom are seen on May 10, 2016 in Miami, Florida. The herbal supplement is a psychoactive drug derived from the leaves of the kratom plant and it’s been reported that people are using the supplement to get high and some states are banning the supplement. (Photo by Joe Raedle/Getty Images)

Multiple surgeries couldn’t help Lisa Vinson with the chronic abdominal pain stemming from endometriosis, a condition in which tissue begins to grow outside the uterus.

MIAMI, FL – MAY 10: In this photo illustration, capsules of the drug Kratom are seen on May 10, 2016 in Miami, Florida. The herbal supplement is a psychoactive drug derived from the leaves of the kratom plant and it’s been reported that people are using the supplement to get high and some states are banning the supplement. (Photo by Joe Raedle/Getty Images)

Her doctors’ answer was pills and more pills.

“It makes you feel better for a little while, but then after a little while, it doesn’t help as much, ” said Vinson, 41, of Crystal River, Florida, who has been coping with pain for most of the past decade.

Like many opioid users, Vinson built up a tolerance to the doses of painkillers she was prescribed. “Every month, (the doctors) say, ‘How are you?’ I say, ‘Well, it’s not really helping as much. I’m still in a lot of pain.’ ” To give her some relief, her doctors would say, “OK, well, add this to it. This pill and then this patch.”

Eventually, she was on 12 prescriptions, some to manage her pain and others to manage the side effects of the pills she was taking for the pain. She didn’t want to be on the pills, but without them, she couldn’t function at all.

“I was torn between not being able to care for my family or (taking) care of them if I just take some more pills. Which shame do I choose?” Vinson said.

The stigma of pain

Despite more meds, her pain persisted. About a year ago, she was back in the hospital, begging for relief. A surgeon was called over. “I thought he was going to come and save the day, and he’s going to agree to do the surgery,” she recalled, Instead, she said, she was judged. She remembers being told, “You don’t have a surgery problem. You have a drug problem.”

Vinson felt stigmatized for asking for help and decided she would take matters into her own hands: She stopped taking the pills. But not only did the pain come back even stronger, the withdrawal symptoms weren’t manageable. She began researching natural remedies to treat pain and came across kratom.

According to Darshan Singh Mahinder, a professor at the Centre for Drug Research at the University of Science Malaysia, throughout Malaysia, the leaves of the kratom plant are traditionally crushed and made into a tea. It’s used to “self-treat heroin/morphine dependence, or to reduce opiate withdrawal among illicit drug users,” he said. It can also be used for pain relief.

But in the United States, it’s sold as a supplement, usually in the form of powder, pills, capsules or even energy drinks, and loosely regulated by the Food and Drug Administration.

Vinson was dubious at first. “If this is so good, why isn’t it the first thing I see? Why haven’t I read about it?” she asked.

After having no luck with other home remedies such as magnesium and Imodium A-D, potassium and Benadryl, she decided to try kratom. “I need this to stop. Clearly, I don’t have what it takes to get through this withdrawal. As strong as I think I am, I’m not. I can’t,” she recalled.

She left the house and bought some kratom capsules. Within several hours of her first dose, she was able to start working around the kitchen. She had a full night’s sleep for the first time in years. She was convinced.

On online forums such as Reddit or Bluelight, there are thousands of posts about kratom. People like Vinson testify about personal miracles.

“Kratom saved my life by getting me through the hardest thing I’ve ever had to do.”

“Hooked on Oxy, Hydro and Aderrall for over a year. Kratom helped me kick the habit.”

“Was using norcos and tramadol … for pain management though they weren’t much help. I found kratom back in November and within weeks I was completely free of both. … Its not perfect but it has definitely changed my life.”

Christopher McCurdy, president-elect of the American Association of Pharmaceutical Scientists, believes that kratom has the potential to work for patients and even help solve the opioid crisis.

“There’s a huge wealth of anecdotal evidence, and some scientific, that there is definite medical potential for this plant. If it’s not in the treatment of mild and moderate pain, it’s definitely in the treatment of potential opioid withdrawal,” said McCurdy, a medicinal chemist at the University of Florida and director of the UF Translational Drug Development Core. He is one of few scientists in the country who’s examined kratom closely.

He believes that the success of the plant may lie in its two principal alkaloids, mitragynine and 7-hydroxymitragynine. These chemicals can bond to the body’s opioid receptors and act very much like opioids do, providing some pain relief and causing a release of dopamine, but at a much more toned-down level than prescription pills or heroin. Users say there are mild, if any, withdrawal symptoms.

McCurdy pointed out that his studies indicate that 7-hydroxymitragynine may have some addictive qualities, but when looked at in the entire plant, the ratio of that element is so little that the plant has very low abuse potential, one he likened to coffee.

And unlike opiods, McCurdy said, kratom doesn’t slow breathing. And that’s key. When people overdose on opioids, whether it is a legally prescribed oxycodone or illicit heroin, their body’s respiratory system completely stops.

Public health experts believe that for every fatal drug overdose in the United States, there are approximately 30 non-fatal overdoses. That means in 2015, in the United States, there were over 900,000 opioid overdoses. It is a record high, and estimates from 2016 predict even worse. Considering that we are in the midst of potentially the worst drug epidemic the country has ever seen, why don’t we know more about this plant?

McCurdy believes it boils down to money. “There’s no financial incentive for any drug company to really pursue developing this into a drug.” Developing kratom into a therapy would cost hundreds of millions of dollars, he said. On top of that, patenting a plant it is nearly impossible.

“There’s no profit incentive for a pharmaceutical to spend millions of dollars — to do the studies the FDA requires … to get approval,” said Jag Davies of the nonprofit Drug Policy Alliance. Davies said it is an issue that faces many botanical drugs, including marijuana.

“The FDA approval (process) is only geared toward single novel (or) single compound drugs,” he said.

In turn, without much interest from pharmaceutical companies, there isn’t much research into this plant. A search of PubMed, the US National Library of Medicine archive, found just a handful of studies of the plant in its entire canon.

Turning kratom into a therapy is something McCurdy is working on: isolating the plant to the essential molecules he believes have potential.

“If we can come up with some sort of standardized, modified, unique and proprietary formulation, then there’s a way to gain some patent stance around that, and then there might be a way to entice a pharmaceutical company into pursuing this as a potential treatment option,” he explained.

But until then, the cost-benefit is just too high for a pharmaceutical company, he said, adding that he will keep doing the heavy lifting of trying to create a standard drug.

The FDA provided guidance for the development of botanical drugs in 2004, but since then, according to the agency, there have been only two botanical drugs approved: Veregen, for warts, and Mytesi, an anti-diarrheal for HIV patients on antiretrovirals. The FDA doesn’t keep track of how many drugs have been submitted that were unsuccessful in gaining approval.

The Wild West of supplements

In the meantime, kratom has found a home on the poorly regulated supplements market. It’s now sold in head shops and gas stations, and there is no clear standard as to what passes for kratom.

Though the kratom plant itself can grow only in Southeast Asia, American distributors are buying leaves to dry and make into powders and pills.

Last year, the Drug Enforcement Administration considered designating kratom as a Schedule 1 controlled substance, the same category as heroin and LSD. According to the DEA, Schedule 1 compounds have “no currently accepted medical use and a high potential for abuse.” The DEA says there were 15 deaths related to the plant between 2014 and 2016.

In addition, the CDC found over five years a tenfold increase in calls about kratom to poison control centers, from 26 in 2010 to 263 in 2015. However, while 7% of the calls were for serious side effects, including one death, most of the calls reported minimal to moderate side effects.

McCurdy has analyzed samples of kratom from emergency room patients and found that they frequently aren’t what they claim to be. “We’ve unfortunately seen them spiked with morphine in some cases, and we’ve also seen ones that have been spiked with oxycodone.” He’s also seen them spiked with increased concentrations of 7-hydroxymitragynine, the more addictive of the plant’s naturally occurring alkaloids.

“We’re in a totally unregulated environment,” McCurdy said, a “buyer-beware marketplace.” As he sees it, this is the extreme opposite of the DEA’s consideration “to put it into the most restricted class of scheduled substances. And then we make it very difficult to find out if that medical potential is really there.”

Since the DEA’s public comment period about regulating kratom ended in December, it has not made any announcements about the herb.

“Right now, the kratom industry is trying to self-regulate,” Davies said. And that means people like Vinson are left to having to reach out to Internet boards and rely on the word of mouth from other users. “You don’t know,” Vinson said. “The best thing for me personally, I only buy from one person that I trust very much.”

Vinson believes in the plant so much that she’s introduced kratom to her older sister, Patrica Coleman Slevin. Slevin began using narcotics about five years ago to help with chronic pain, she said. Within months, she was dependent. Two years after getting her first prescriptions for pain medication, she was alternating between high dosages of Dilaudid and oxycodone daily. Her body needed higher doses to get rid of the pain and manage the withdrawal.

“Everything hurts. You’re sick. You’re nauseous. You’re throwing up. Diarrhea. Your will to live is gone because you can’t, it’s just the most unfathomable feeling. Everything, everything is just broke,” explained Slevin, 45, of Live Oak, Florida.

When she couldn’t get more pills, she turned to heroin. Her husband also began using. Coleman eventually lost her job as a server. They lost their home. “It takes no time for the bottom to fall out,” Slevin said.

Last year, she was caught shoplifting and ended up in jail.

When she got out, she called her sister. Vinson remembers picking up the phone and saying, “I will not send you money for drugs … but I will buy you kratom.”

In November, Slevin and her husband moved in with her parents, and she hasn’t touched heroin since.

Will kratom keep her off heroin for the rest of her life?