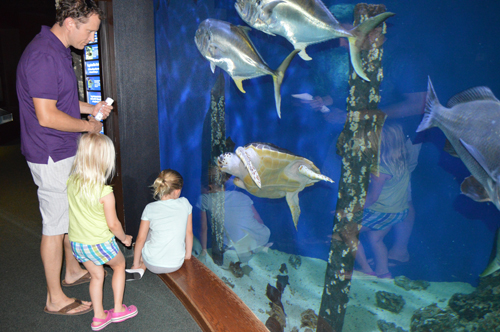 NEWPORT NEWS, Va. – Coco, the loggerhead sea turtle featured at the Virginia Living Museum, will be let back into the wild this coming weekend after spending over two years at the museum on display.

The turtle is currently being transported back to the North Carolina Aquarium where it will be let go into the Atlantic Ocean south of Manteo, North Carolina.

Workers at the Virginia Living Museum guided Coco into a bin at the top of the exhibit and moved her behind the scenes Thursday morning, where she was prepared for transportation.

Patrycja Lawryniuk and Britt Sorensen, aquarists that handle Coco, will be driving down with the turtle Friday before the release Saturday.

“This is an exceptional animal, and I’m so glad Coco will be returning to its natural habitat,” said Lawryniuk

Coco has been with the VLM since July 8, 2015, and was apart of the Sea Turtle Loan Program at the museum.

VLM has had a close working relationship with the Aquarium, which has allowed the museum to have loggerhead turtles as part of its exhibits for years.

Each year female loggerheads make their way ashore to nest along the beaches of coastal North Carolina. These nests are federally protected and continuously monitored by a network of volunteers and institutions to ensure the maximum number of hatchlings survive.

Weak or disoriented hatchlings are collected to be nursed back to health at the North Carolina Aquariums and their partner institutions.

The Virginia Living Museum has released several turtles back into the wild as part of the Sea Turtle Loan Program since starting it.

Listed as a threatened species, the loggerhead sea turtle is one of the largest reptiles of earth.

VLM did not say if it is looking to bring another turtle to its exhibit.