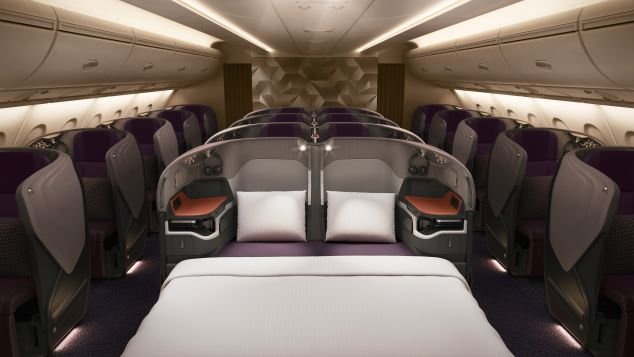 It’s been nearly 38 years since Philippine Airlines unveiled the first fully flat bed on a commercial jet in the shape of slim, bunk-style “Skybeds” on the first class upper deck of its Boeing 747.

That luxury was short-lived, and airlines mostly spent the ensuing decades plotting ways to stuff more and more passengers onto their planes, no matter the class.

Luckily trends change, and the past few years has seen a resurgence in airlines providing for personal space, privacy, and — yes — a quality rest.

Singapore Airlines has now revealed the latest luxury sleeps in the sky, thanks to an investment of $850 million dollars in its aircraft interiors, bringing about “Suites” that look more like hotel rooms, and business class seats that convert to double beds.

If this news triggers déjà vu, it’s because the airline has been offering double beds in its highest class of service for a decade, beginning in 2007 with the arrival of the first Airbus A380 to enter commercial service.

“Our original Suites were the first to offer double beds in the sky and they are still regarded as the ultimate in premium travel,” Goh Choon Phong, chief executive at the carrier, said during the unveiling in Singapore of the latest designs. “Not only are we retaining that feature, but now the beds are even more plush and comfortable than before.”

There are six Suites at the front of the A380’s upper deck, and each may be individually closed off from the aisle by sliding, half-height doors.

Within, a passenger is equipped with a 76-inch-long bed separate from the seat, though the latter boasts a 270-degree swivel and 45-degree recline for dining (with Wedgwood china), getting work done (over high-speed, Inmarsat Global Xpress satellite Wi-Fi) and, or simply daydreaming out the windows before it’s time for rest.

Despite the bells and whistles, the focus for the new Suites is overwhelmingly on providing quality time to the guest, hence the abundance of privacy.

It’s a consideration frequent business travelers such as Gary DeGregorio, an executive at global technology consultancy ThoughtWorks, can well appreciate.

“Those traveling on business in C-level roles or in the fields of sales or consulting, need to be influencing the external and internal stakeholders constantly, so a very focused and positive state of mind is crucial,” DeGregorio tells CNN Travel.

“Rest and privacy are important during long flights as typically one does not have the luxury of time while traveling on business; privacy offers more control over the environment, the ability to prepare work more freely, and less psychological pressure in interaction.”

Couples seated together are now also granted the ability to combine space and get cozy in a 78-inch-long double bed, thanks to retractable partitions and seats that recline to fully flat.

By virtue of the small size of the country — Singapore is 276 square miles, half the size of Los Angeles — and with only one major international airport, it’s plain to see why Singapore Airlines operates no domestic flights.

The shortest route on its map is a 185-mile hop from Singapore to Kuala Lumpur, and is often packed with passengers connecting to the Malaysian capital from other distant destinations.

The airline even held the world record for longest commercial flight up to 2011, when it discontinued a 19-hour nonstop from Singapore to Newark that it plans to resurrect later in 2018.

In other words, Singapore caters for travelers on gruelingly long and involved itineraries is a specialty of Singapore Airlines.

Similar can be said for the only other two airlines boasting of double beds onboard: Etihad Airways, which introduced the single-room First Class “Apartment” and three-room “The Residence” accommodations onboard their A380 aircraft in 2014; and Qatar Airways, whose “Qsuite” business class debuted this year on select Boeing 777-300ER routes from Doha to London, Paris, and New York.

Kinny Cheng, a frequent flier who has experienced both the Etihad First Class “Apartment” and Singapore’s’ previous Suites Class, tells CNN Travel that he didn’t expect anything less from the latest reveal.

“To be fair, Singapore Airlines has had time to contemplate on how to make their product better than the competition,” he says. “And the new Suites seem like improved, refined, and ergonomically adapted upgrades to the spacious, top-tier premium cabins already out there.”

Flights in the new seats are already for sale, with Suites pricing from $6,600 and business class from $3,100 round-trip between Singapore and Sydney, the first route to have the fresh interiors with flight from December 18 on an initial total of 19 Singapore Airlines A380s.