Now, residents in the Town of Waverly are starting to what can happen if a water system is not properly maintained. Residents have been complaining to CBS 6 Problem Solvers for months about brown nasty water.

CBS 6 Problem Solver investigator Melissa Hipolit found out that the town has not been taking care of its water system like it should.

"It's like playing Russian roulette. You turn the water faucet on and see what you get," Martha Barrow, a Waverly resident, said.

Barrow no longer drinks the water coming out of the faucet at her home in Waverly.

She won't even use it to brush her teeth, and she worries every time she throws a load of laundry into her washing machine.

"It smells, it comes out of the faucet brown and you have to let it run," Barrow said.

Waverly residents sent CBS 6 video and photos of the brown water over the past several months and asked us to investigate why their water is often brown.

"Everybody I talk to they say the same thing, they're pissed, they're paying this high water bill, and they really can't use it," Barrow said.

"If I were living in the town, I would be upset too," Daniel Horne with the Virginia Department of Health's Office of Drinking Water said.

Horne said Waverly's water system is old and the town has failed to maintain it.

"It's like owning a car. You have to do preventive maintenance on your car or it's going to fall apart, and our water system, our waste water system are no different," Horne said. 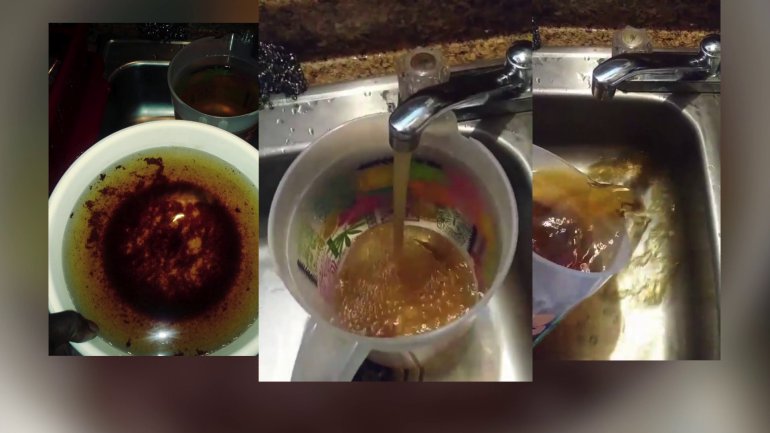 He said the problem was made worse when VDOT and their contractor replaced pavement on some streets in Waverly around Memorial Day and the weight of their equipment broke some of the water lines beneath.

"At one point they had more than 60 small line breaks that they had to chase down," Horne said.

The breaks caused water flow to speed up inside the pipes, which dislodged iron and manganese particles, causing the water to turn brown.

"Is the water unhealthy?" asked Horne.

"No, the iron and manganese in the water and the discoloration certainly makes it unpalatable and undesirable, but it is not a health issue," Horne replied.

But, the state said they also found several fire hydrants that did not work due to internal corrosion.

"That doesn't sound safe to me," Hipolit said to Horne.

"Doesn't sound safe to me either," Horne replied.

Waverly recently applied for a $2.8 million state grant to fix things and Horne said the state is working with the town to improve the water system.

"I never had any problems at my home," Mason said.

However, he admitted the lines need work, and gave CBS 6 a tour of some of the improvements the town has made so far including a refurbished water tower, and a new water well.

"We never had an infrastructure plan to do maintenance on the pipes," Mason said.

"Why was there not a long-term plan to maintain the water system?" Hipolit asked Msaon.

Mason said most of Waverly's residents are poor and elderly and the dollar value of the repairs exceeds the town's budget, so water rates will have to go up.

"They want the water fixed? That's what is going to have to happen," Mason said.

In the meantime, Martha Barrow and the other people who live in Waverly said they'll just make do and hope that things "clear" up.

"You got to live with it and you got to pay that water bill that's it," Barrow said.

CBS 6 asked Mayor Mason about the fire hydrants the state said they found were frozen, and he told us it's a single fire hydrant that does not work.

He also said there are five leaks that still need to be repaired and three of four broken blow off valves have been fixed.