NORFOLK, Va. - A mixed martial arts accident paralyzed a Virginia Beach man last year, but he is not letting anything stop him.

It’s been a long year for 30-year-old Mike Sheffield. News 3 first introduced you to him in December 2016 when he was diagnosed as a C4C5 Quadriplegic.

“It basically just means that I have limited use of all four limbs,” he said

One day in October 2016 he had an accident while practicing MMA that would change his life.

“I was on the ground, on the mat and my body wound up going over my head and my head stayed where it was ,and the next thing I knew I was in the hospital,” said Sheffield.

He stayed in ICU for weeks – then his family moved down to Atlanta so he could receive top-notch treatment at the Shepherd Center Rehab facility. 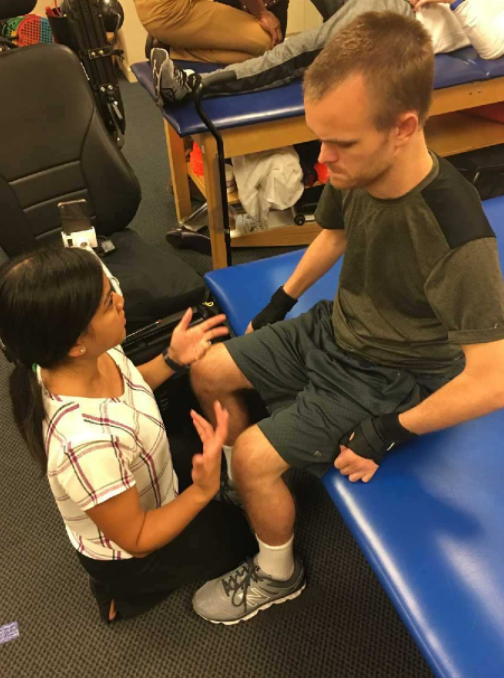 “It's changed everything for all of us,” said David Sheffield. “There was no way of knowing if Mike is going to recover a lot or none or completely.”

But the last year has been filled with hard workouts, focus and determination and the results have been major improvements, according to Mike.

Last year when we interviewed him, he could not move his arm and said he also has a lot more strength in his core.

He spent many hours at the ODU Monarch Physical Therapy Clinic, a place where he found inspiration and met new friends who he inspired.

“My story has brought people to the clinic and that's amazing.  It's amazing every time,” said Sheffield.  “They say, 'We read your story and you give us a little bit of hope and reason to come back and fight and fight and keep trying to recover.'"

“It's amazing, he's come so far he's a huge inspiration,” said Samantha Atkinson-Lanier,  one of Sheffield's former students. She is organizing a major fundraising event Sunday at the Bearded Bird Brewery in Norfolk.

“When Michael had his injury, we realized there was a big deficit for needs for people with spinal cord injuries,” said Atkinson-Lanier.

Sheffield said the money will go towards the Monarch Physical Therapy Clinic to help them grow and expand.  The clinic provides specialized care for several different kinds of neurological injuries and conditions.  He wants to raise money to help them increase their technology. Their goal is $10,000, according to the website.

“We have so many people there that can benefit from their expansion because that's what we're trying to do right now. We're trying to get them into a bigger space, trying to increase the technology so that can assist more people,” he said. “When I look around, I see people with so much more difficult circumstances than I have, and my heart goes out to them. I have nothing to complain about - I'm doing really really well. I got a good support staff. I'm healthy. I may have issues with my body and my physical recovery, but my mind is sound and my heart is healthy. I'm doing just fine.”

“He spends about half of his day working out but he spends the other half on the phone and thinking about how he can offer the kind of care to others that he's is getting,” said David.

On Sunday, November 19, Eggleston Services presents the 2nd Annual"Fight Like Mike: The Hunt," which will be held from 11 a.m. to 4 p.m. to raise funds for the clinic.