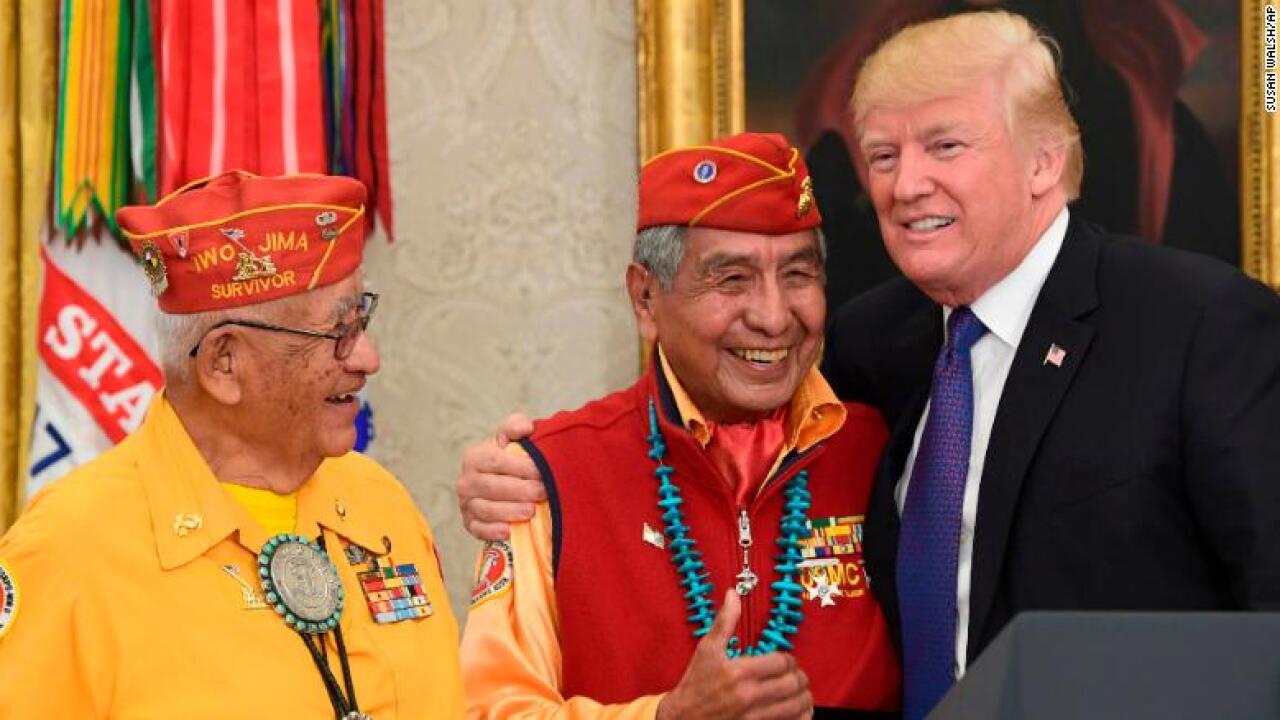 President Donald Trump, during an event at the White House honoring Navajo code talkers Monday, referenced his nickname for Sen. Elizabeth Warren, “Pocahontas,” a label he has long used about the Massachusetts Democrat.

“I just want to thank you because you are very, very special people. You were here long before any of us were here,” Trump said. “Although, we have a representative in Congress who has been here a long time … longer than you — they call her Pochahontas!”

He then turned to one of the code talkers behind him, put his left hand on the man’s shoulder and said: “But you know what, I like you. You are special people.”

Trump did not name Warren.

The comment, met with silence from event attendees, revives an insult the President has long thrust upon Warren but restated a high-profile meeting with the Native American war heroes.

“It is deeply unfortunate that the President of the United States cannot even make it through a ceremony honoring these heroes without having to throw out a racial slur. Donald Trump does this over and over thinking somehow he is going to shut me up with it. It hasn’t worked out in the past, it isn’t going to work out in the future,” Warren told MSNBC shortly after Trump’s remark.

Conservatives have previously criticized Warren for claiming that she is part Native American, and the senator’s heritage became an issue during her Senate campaigns.

Trump has seized on the attacks and has regularly called Warren “Pocahontas.” The attack dates back to his 2016 campaign.

“Pocahontas is at it again,” he tweeted in June 2016. “Goofy Elizabeth Warren, one of the least productive U.S. Senators, has a nasty mouth. Hope she is V.P. choice.”

He added, “Crooked Hillary is wheeling out one of the least productive senators in the U.S. Senate, goofy Elizabeth Warren, who lied on heritage.”

He has also made used the nickname privately.

Sources told CNN earlier this year that during a meeting with senators at the White House, Trump taunted Democrats by saying “Pocahontas is now the face of your party.”

Trump has routinely given his political opponents nicknames, but the slight against Warren is one of his most culturally insensitive.

Warren says she is, in fact, part Native American, citing “family stories” passed down through generations of her family.

“I am very proud of my heritage,” Warren told NPR in 2012. “These are my family stories. This is what my brothers and I were told by my mom and my dad, my mammaw and my pappaw. This is our lives. And I’m very proud of it.”

The legitimacy of Warren’s heritage has been widely debated and Scott Brown, her 2012 Senate campaign opponent, has even suggested Warren take a DNA test to prove her heritage.

Harvard Law School in the 1990s touted Warren, then a professor in Cambridge, as being “Native American.” They singled her out, Warren later acknowledged, because she had listed herself as a minority in an Association of American Law Schools directory.

Critics seized on the listing, saying that she received preferential treatment for questionable Native American heritage. Warren contends that her career was never furthered because of her Native American genealogy.