VIRGINIA BEACH, Va. - There has been a wave of violent attacks have happened across the country in schools, places of worship and public events in the past few months.

News 3’s cameras got an inside look at what Virginia Beach Sheriff Ken Stolle is doing to protect and train people who work in the courthouse.

Leaders with the Sheriff’s Office said they want the people who work at the courthouse to be best prepared if they encounter an active shooter or an active threat.

In one training session, a group of co-workers moved tables against a breakroom door, stacked chairs and worked together to try trying to prevent a shooter from getting inside.

Virginia Beach Sheriff’s deputies trained courthouse employees on how to barricade themselves inside a room, one of several topics covered during the session.

During the first hour, the group discussed recent shootings, scenarios and the importance of evacuating - if possible, where to go, how to flee, how to barricade yourself in a room and how to fight an attacker.

Virginia Beach Sheriff’s Office Deputy Jimmy Six said reports of massive shootings are “happening way too often and people are not being trained on how to respond.”

Virginia Beach Circuit Court Clerk Tina Sinnen made it mandatory for her staff of 57 to attend the training course and said she wants them to be prepared.

Sinnen said over the last few years she has noticed customers getting a little angrier when they are at the counters at the Clerk’s Office and it makes her nervous. She said she requested to put glass windows put up in one section of the office after two customers grabbed two of the employees in two separate situations.

Deputies said the skills they were discussing during the training session could also be used if people were out in public.

“We are trying to provide everybody that has been to this class the tools to survive an active threat situation,” said Deputy Six.

“This is not just a workplace thing. They could be having dinner with her family in a restaurant, they could be shopping, these a lot of these tactics can be used for everyday life,” said Captain Alvie Culanding.

“Unfortunately, we live in a time where bad things happen and you hear about it all the time. We don't want it to happen here,” said Sinnen.

Sheriff’s officials said 250 employees will have undergone training following its completion and that they hope to expand the program next year. 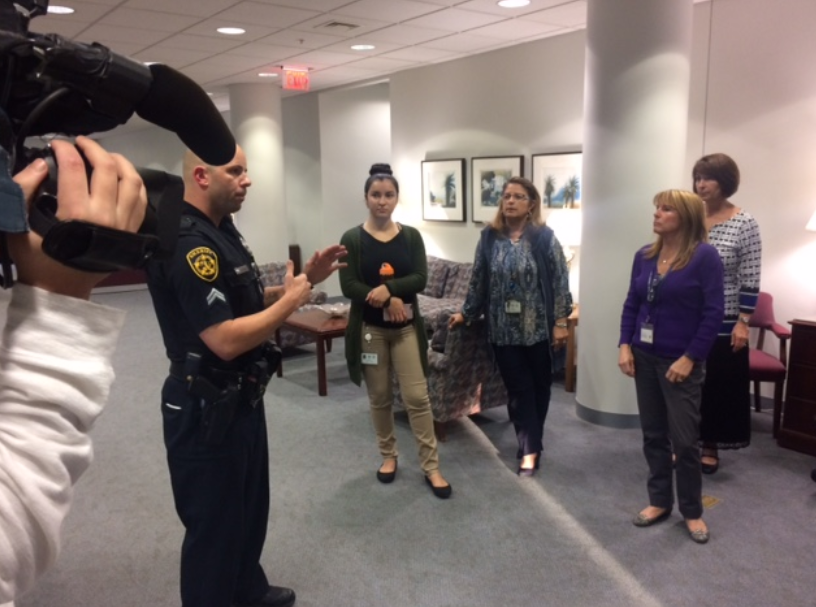