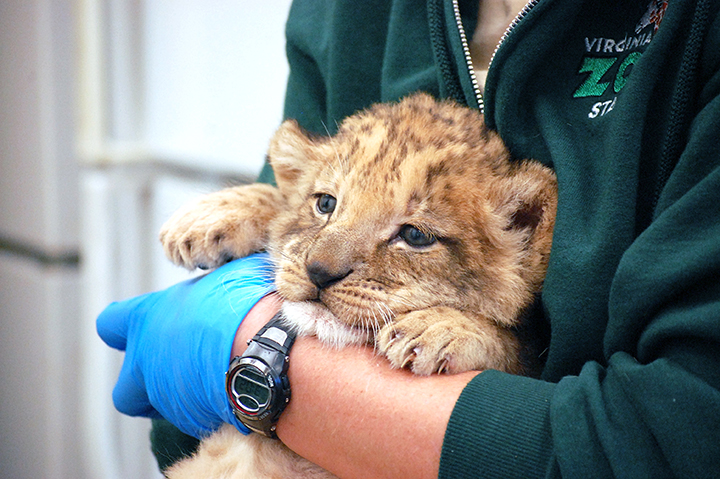 NORFOLK, Va. – On October 28 a male lion cub was born at the Virginia Zoo.

The cub of Virginia Zoo lions Zola (mother) and Mramba (father) weighed at birth three pounds and five ounces. The cub is now 4-weeks-old and weighs 10 pounds, and is weighed everyday by zoo staff.

Zola, the 13-year-old lioness, gave birth in her indoor den at the Zoo’s Africa – Okavango Delta exhibit. She immediately displayed natural instincts of nursing and grooming the cub, said the Zoo.

“The birth of any animal is always exciting,” said Greg Bockheim, Executive Director of the Virginia Zoo. “The birth of this lion cub specifically is a significant contribution to its genetic population and also provides a fun educational opportunity to our community,” Bockheim added.

The baby cub and his mother Zola are not yet able to be viewed at the zoo by the public, but Virginia Zoo says that it will be posting picture and videos of the cub on its social media outlets. Virginia Zoo also said that it will soon have a Cub Cam so that the cubs activities can be viewed digitally.

Veterinarians and Keepers at the Virginia Zoo say they have kept the cub and mother away from the lion exhibit to ensure a normal growth development. Apparent Zola’s grooming became a little too ambitious, and the cub had developed a wound under his right arm, said zoo veterinarian Dr. Colleen Clabbers, who treated the wound.

“This isn’t uncommon for a single cub,” said Dr. Clabbers. “Typically a lioness births two to five cubs and can spread her attention among all of them. In this case, Zola only has one cub to care for, and although she’s doing a great job, her strong maternal instincts have proven to be a little excessive,” Dr. Clabbers added.

Zoo Keepers have added enrichment items in Zola’s enclosure while she bonds with her cub off exhibit, which helps provide a healthy distraction for her in times of over nurturing.

The zoo has not set a timetable for the adding of the lion cub and its mother back to the exhibit.