Former military working dog still missing in Portsmouth, what the owner is doing about it

PORTSMOUTH, Va. - A former military working dog in Portsmouth is missing. Darja's owner, Frankie Rivas is desperately asking the community to help find her. Darja was last seen on December 2.

Rivas has been walking around the city anxiously handing out flyers in hopes to find her four-legged friend.

Darja is considered a hero to many people. She worked in Kuwait as a military working dog that sniffed cars for explosive devices.

The Mission K9 brought her to the U.S in July upon her retirement.

Darja was adopted in October where she made a new home with Rivas.

She tells News 3's Aleah Hordges, "Darja is my everything like ying and yang. We fit together like puzzle pieces."

The dog was with a sitter in the Shea Terrace Community of Portsmouth when she jumped over a fence and ran away.

Rivas said it was unusual behavior and without hesitation she drove hundreds of miles from New York City back home.

She said the sitter chased Darja for about 30 minutes before she cut through some houses. When he (sitter) got there she wasn't in his peripheral vision.

Some neighbors say they spotted the dog around 1 a.m on Monday near Portsmouth Naval Hospital and near Maryview Hospital hours later.

Rivas mentioned, "She's very friendly and the fact that people have seen her and tried to get her into the car and that she just keeps running. I'm imagining that she's frightened."

Rivas was wearing Darja's leash around her neck that's a reminder of her companion.

"It's hers so I've got it with me," added pet owner Rivas.

Mission K9 Rescue says that Darja has a red collar with her name tag, plus rabies information. 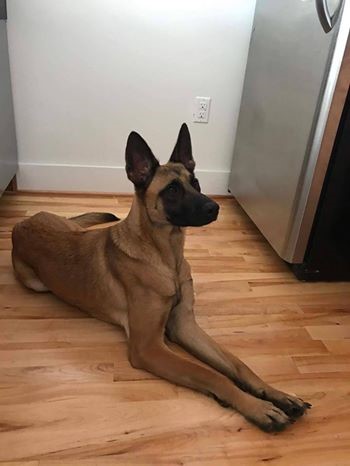