For avid skiers and snowboarders, it’s the most wonderful time of year — the winter ski season has officially begun. But it’s not just vacationers and action sports buffs hitting mountains across the country.

Teams of skillful ski patrollers are reporting for work on the slopes, including a small but mighty contingent of avalanche dogs (or “avi dogs,” as they’re called in ski communities).

At Snowmass, Colorado, nine miles from downtown Aspen, two Nova Scotia Duck Tolling retrievers and a Labrador retriever work on the ski patrol team. The ski resort and town celebrates its 50th anniversary this winter, and festivities will mark the occasion throughout the season, starting with a weekend of special events from December 15-17, 2017. As one of the cutest sights on the mountain, you can be sure the avi dogs will be in on some of the celebrations.

Spence explains that all ski patrollers who work with a dog on the mountains take their dogs home at night, creating an incredibly strong bond and sense of trust that is crucial when they’re on patrol.

They may look cute, but being an avalanche dog is serious business: “If there is an avalanche and we’re not sure somebody is in it, we send the dogs out to search that area,” says Spence.

“The dog’s nose is tens of thousands of times better than our nose, so if people [who are lost] are not wearing an avalanche transceiver beacon, then our best bet to find them alive is to get the dogs our there first. They can search an area so much faster than we could. It could take us many hours — up to days — where the dogs can hopefully locate a person in minutes.”

While the dogs have this serious mission, when not on a search they get to spend time staying warm and cozy in the patrol station. During the day, handlers will maintain their dog’s training regime and run drills with them. Then it’s time to socialize and play.

“They do a lot of PR on the hill,” says Spence. “People love seeing them and come to our top patrol just to meet them. We give out baseball cards with the dogs’ pictures and bios on them — so you have to go to each mountain here in Aspen so you can get the dogs from each hill.”

Training to become an avalanche dog begins when the dogs are puppies, with basic acclimatization. “You expose them to everything here,” says Spence. “All the people and the action — the chairlifts going around the snowmobiles going up the hill.”

Puppies begin with games where they find people [safely] buried under the snow, and gradually advance to searching larger and deeper areas. They love the game, says Spence, and each drill — and real-life search, regardless of outcome — is rewarded with the ultimate prize: a game of tug of war.

As for other perks of the job, Spence says the dogs are crazy about their commute. “They ride the chair lift with us to work in the morning and at the end of the day the dogs either go down in a toboggan or we can ski them down — we can carry them on our shoulders.” Other times they go down in the cat: the snow machines that traverse the mountain.

“That’s kind of funny,” Spence laughs. “We put the dog in the cat. It’s super cool to be able to bring your best friend to work.”

The Snowmass 50th Anniversary festivities begin December 15-17 and continue throughout the 2017/2018 winter season, which runs until April 15, 2018. For more information, visit gosnowmass.com. 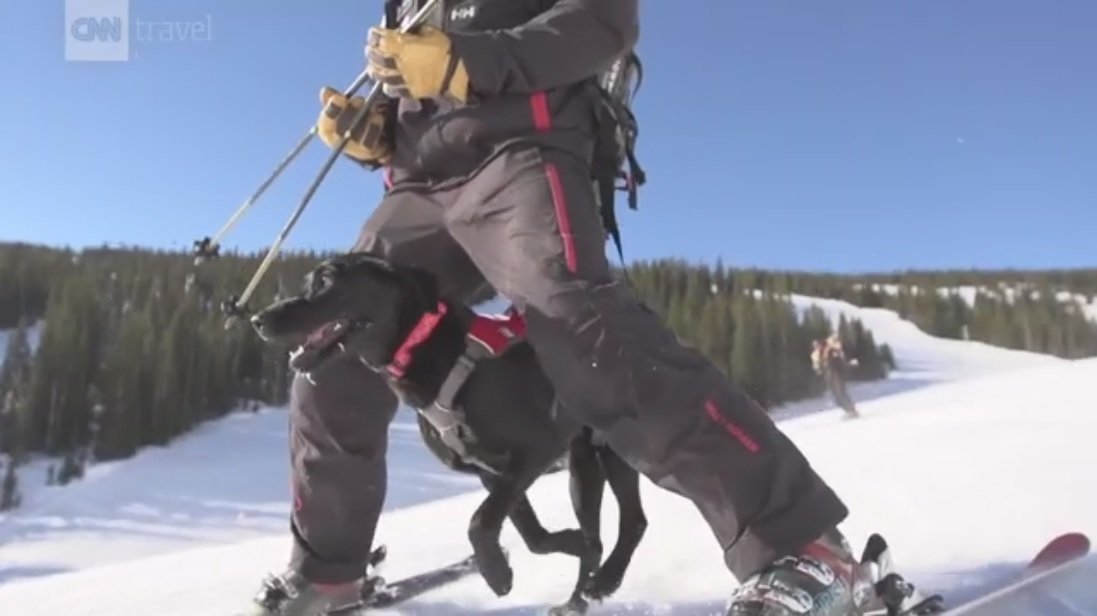