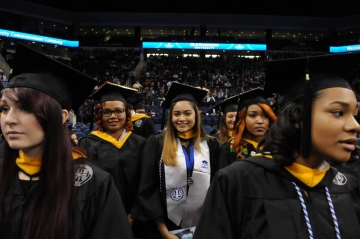 NORFOLK, Va. – More than 1,600 bachelor’s, master’s and doctoral degrees were awarded at the 127th commencement at Old Dominion University on Saturday.

With a 9 a.m. start to the first of two graduate ceremonies at the Ted Constant Convocation Center, friends and family were excited to see  graduates of the Batten College of Engineering and Technology, Darden College of Education and College of Sciences at ODU, cross the stage.

Drew Ungvarsky, CEO and creative director of Grow, was the commencement speaker for the first graduate ceremony. Ungvarsky graduated from ODU in 2002 with a computer science degree.

An active community advocate and civic leader in Norfolk, Ungvarsky serves on the executive board of the Downtown Norfolk Council, where he’s helped create the successful Vibrant Spaces program and the Selden Market, say officials with ODU.

“Find a way to come through in tough situations for an employer or a client and you will endear yourself to them forever,” he said.

Ungvarsky concluded by noting the importance of community involvement.

“Most of us aspire to make the world a better place. It took me too long to realize that we can impact our local community in real, tangible and relatively quick ways,” he said. “Where national and global issues sometimes feel out of reach, you can move the needle in your own community tenfold.”

Miki Toliver King, vice president of operations and digital marketing at The Washington Post, spoke at the 2 p.m. ceremony to graduates of the College of Arts & Letters, the Strome College of Business and the College of Health Sciences.

King, who is a Chesapeake native, earned a degree from the Wharton School of the University of Pennsylvania and a law degree from George Mason University. After working in both law and media, she joined the Washington Post in 2016.

King spoke of integrity and work ethic to ODU graduates saying, “The respect you show others should have nothing to do with who they are, but everything to do with who you are. “Integrity is demanding the best behavior of yourself when there’s no one around to demand it from you,” she said. “It only becomes part of your brand when it is consistent, unyielding and core to who you are. Exercising grace requires stillness sometimes when you are raging. It’s controlling your emotions rather than allowing them to control you.”

King, in one last piece of advice,  cited well-known business management strategist Peter Drucker as she concluded her speech saying, “As you strive to achieve all that you have been prepared to at this great institution, remember that your character has the power to either accentuate and enhance or tarnish and sabotage everything you do,” she said. “So, while you are building your future, build your character brand, and build it well.”