Around the world, kids’ Christmas gifts include KFC, books and ‘pooping logs’ 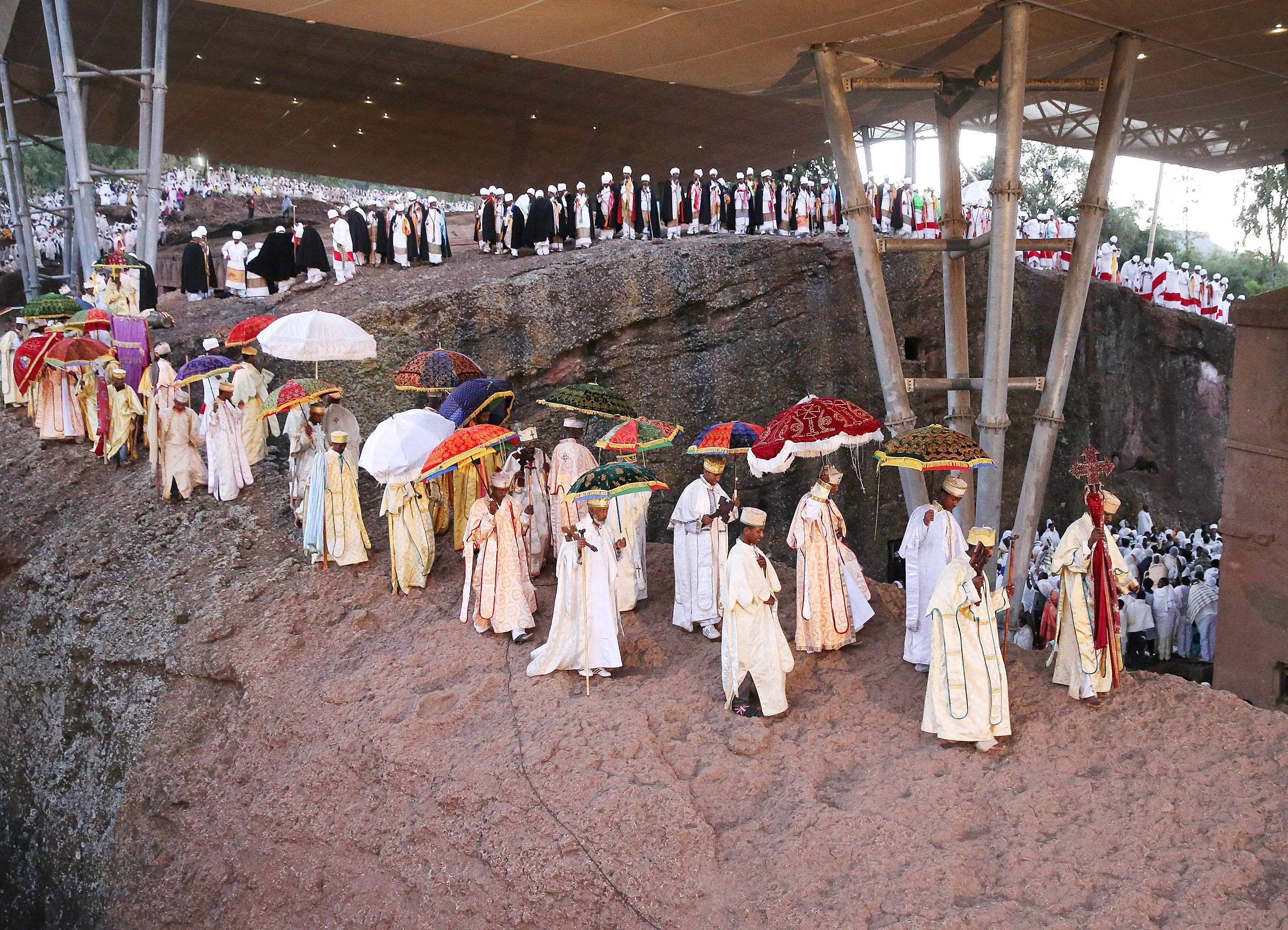 Tiny tots, with their eyes all aglow, are now relishing — or eagerly awaiting — holiday celebrations around the world.

In places like the United States, where 90% of people celebrate Christmas, children will look for presents from Santa Claus under the tree and treats in their stockings.

Yet in other regions of the world, who brings gifts and what those gifts are can vary, depending on where families live and which holiday they are celebrating.

Here is just a sampling of the whimsical ways some parents and children celebrate the season across cultures.

In Italy, children receive gifts from Babbo Natale, or Santa Claus, but there’s also a witchlike woman who delivers gifts to the nice and coal to the naughty during the holidays.

“Befana is the female Italian equivalent of Santa Claus,” said Anne Rashford, director of special exhibitions and events at the Museum of Science and Industry in Chicago, who curated the museum’s Christmas Around the World exhibit currently on display.

Rashford described La Befana as an elderly woman who flies on a broomstick across Italy, giving gifts to children on Epiphany Day, a Christian holiday celebrating the first manifestation of Jesus Christ to the Gentiles.

The holiday, on January 6, is also known as Three Kings Day or the Feast of the Epiphany.

Various versions of the legend of La Befana describe her as a little old woman, a kindly witch or a fairy queen. In some tales, legend has it that La Befana declined an invitation to join the wise men on their journey to Bethlehem to see baby Jesus, and so to this day, she takes flight every Epiphany Eve to search for the holy child on her own, Rashford said.

Yet while children follow the tale of La Befana in Italy, in some parts of Africa, they wait for Old Man Bayka.

In Liberia, Old Man Bayka, or the county’s “devil,” wanders the streets begging for presents on Christmas Day, according to the ONE campaign, a world advocacy organization.

In other parts of the African continent, such as the Democratic Republic of Congo, children often participate in church musicals or Nativity plays for Christmas, according to ONE. In Sierra Leone and much of Gambia, towns and villages celebrate with masquerade parties.

Christianity — and, it could be assumed, the celebration of Christmas — has grown significantly in sub-Saharan Africa as well as the Asia-Pacific region.

The portion of the population that is Christian in sub-Saharan Africa climbed from 9% in 1910 to 63% in 2010, while in the Asia-Pacific region it rose from 3% to 7%, according to the Pew Research Center.

Kids get KFC for Christmas

In Japan, where about 1% of the population identifies as Christian, many children and adults alike who celebrate Christmas do so with a big bucket of finger-lickin’ good Kentucky Fried Chicken.

KFC was established in Japan in 1970 and launched a nationwide Christmas campaign on December 1, 1974, according to the company’s website. Ever since, KFC has implemented Christmas campaigns in all stores every year.

Translated from Japanese via Google, the Kentucky Fried Chicken Japan website notes, “Eventually in Japan the custom of ‘Christmas is a fried chicken’ has taken root, and it has become established as a strange kind of poetry from the West.”

Leaving shoes instead of stockings for sweets

Food has become a jolly part of how children around the world celebrate the holidays, especially across Europe.

In Estonia, “apples, nuts, cookies and other treats are often given to children during the holidays. Apples became a tradition because they were free and keep for a very long time,” Rashford said.

During Christmas in France, she added, children traditionally put their shoes in front of the fireplace or by the Christmas tree for Père Noël, or Father Christmas, to fill with presents, sweets, fruits and nuts.

In the Netherlands, on the evening of December 5, children tend to leave wooden shoes for Sinterklaas, or St. Nicholas, filled with sweets for him and carrots or hay for his horses, Rashford said. In turn, St. Nick, who is said to travel from Spain, fills the shoes with treats.

In the US around the 1920s, gifts given to children in celebration of Hanukkah started to include foil-wrapped chocolate coins called gelt, which is Yiddish for money, and perhaps were based on the chocolate money that some Dutch children received from Sinterklaas, according to the National Endowment for the Humanities. Now, gelt at Hanukkah can take the form of candy or actual money in a card.

Pooping logs and bundles of hay

In Spain, some parents gift their children friendly-looking hollow logs as part of a unique Christmas tradition.

Every night leading up to Christmas, the family “feeds” or stuffs the log with treats such as nuts, dates and candies. On Christmas, they sing “log songs” and beat the log with sticks, like a piñata, so it will spill the treats. The logs are called caga tió, or pooping logs.

Spain and other Spanish-speaking regions also celebrate Epiphany or Dia de los Tres Reyes, the Day of The Three Kings.

On the eve of Epiphany in Spain, some children leave their shoes on windowsills or balconies or by the front door for the Magi, or wise men, to fill with gifts.

In the Commonwealth of Puerto Rico, where Three Kings Day or Epiphany is an official holiday, children stack bundles of hay or grass in shoe boxes under their beds for each wise man’s camel to eat and exchange for gifts.

On Christmas Eve in Greece, some children go caroling, singing and playing music, and their neighbors reward them with tasty snacks and coins.

In Norway and some other Scandinavian countries, a red-hat-wearing, elf-like creature named Julenisse has been associated with the Christmas season.

Tradition has it that Julenisse brings small gifts and fruit to children, Rashford said. In turn, children leave porridge for Julenisse on Christmas Eve.

“Sometimes he can be mischievous if not satisfied with his porridge,” Rashford said.

Across Denmark, Norway and Sweden, children celebrate Christmas with some Disney magic.

Watching “The Disney Christmas Show” with family on Christmas Eve has become a holiday tradition among children in Scandinavian countries, said Bjørn Schiermer, a postdoctoral fellow in the department of sociology and human geography at the University of Oslo in Norway.

The animated television special, titled “From All of Us to All of You” in English, is a collection of Disney shorts and feature films, presented with a holiday theme.

“It’s not only watched by children but also by adults who watched the show themselves when they were children, so it’s a pretty old tradition in all Scandinavian countries,” Schiermer said.

“They had experiences with their parents when they were young, and now they try to pass that tradition on to their kids,” he said, “but there is a certain nostalgia in seeing the show and reliving your childhood.”

Schiermer and Hjalmar Bang Carlsen, a researcher at the University of Copenhagen in Denmark, analyzed the nostalgic ritual of watching the Disney show in a study published last year in the journal Acta Sociologica.

The researchers gathered data on audience reactions to the show through previous studies, Google searches on the term “Disney Christmas Show,” and 675 Instagram posts about the show from December 2012 to December 2016.

Almost one-sixth of the posts, 97 out of 675, contained the word “family,” the data showed.

Schiermer watched “The Disney Christmas Show” each year during the holidays with his own family as a child, he said. It typically aired Christmas Eve.

Besides watching the show, “you would eat, and afterwards you would dance around and sing around the tree, and then you would have your presents. So we have our presents on the 24th, at the end of the day,” he said. “It’s also a day where you’re very, very intensively together with your family, and the Christmas show is a part of that.”

The tradition of giving books

Instead of watching TV, some children in Iceland can be found reading a book during the Christmas season.

Children in Iceland sometimes spend Christmas curled up with a cozy book thanks to Jólabókaflóð, which translates roughly as the “Christmas book flood,” according to the not-for-profit Jolabokaflod Book Campaign.

This annual book flood dates to 1944, when Iceland gained its independence from Denmark. One of the few goods not rationed during the war was paper, and books quickly became popular gifts to give during the winter holidays, according to the campaign, which aims to keep the tradition alive.

Books are the single most popular Christmas gift item in Iceland, according to the United Nations Educational, Scientific, and Cultural Organization.

In the US, where some African-American families celebrate Kwanzaa from December 26 until New Year’s Day, children are traditionally given meaningful gifts such as books.

The last day of Kwanzaa, or Imani, focuses on gift-giving as a way to honor the creative spirit and reaffirm self-worth, and often such gifts are homemade rather than purchased, according to the National Endowment for the Humanities.

The official Kwanzaa website notes that gifts given to children “must always include a book” and some type of heritage symbol representing African history and traditions.

‘In true holiday tale form, they lived happily ever after’

Out of the many holiday traditions around the world, Rashford said, one of her favorites is a Ukranian folk tale often shared at this time of year about a spider and a Christmas tree.

“A poor widowed mother and her family had a pine cone fall in their house in the summer, and all summer, they care for the seedling. By Christmas, it had grown into a full tree,” Rashford said.

“Sadly, the family could not afford decorations for their new Christmas tree, and on Christmas Eve, they went to sleep with no decorations on their tree. Then they awoke on Christmas morning to a tree covered in beautiful spiderwebs, and once they opened their windows, the sun rays transformed the webs into silver and gold,” she said. “And in true holiday tale form, they lived happily ever after and never worried about money again!”