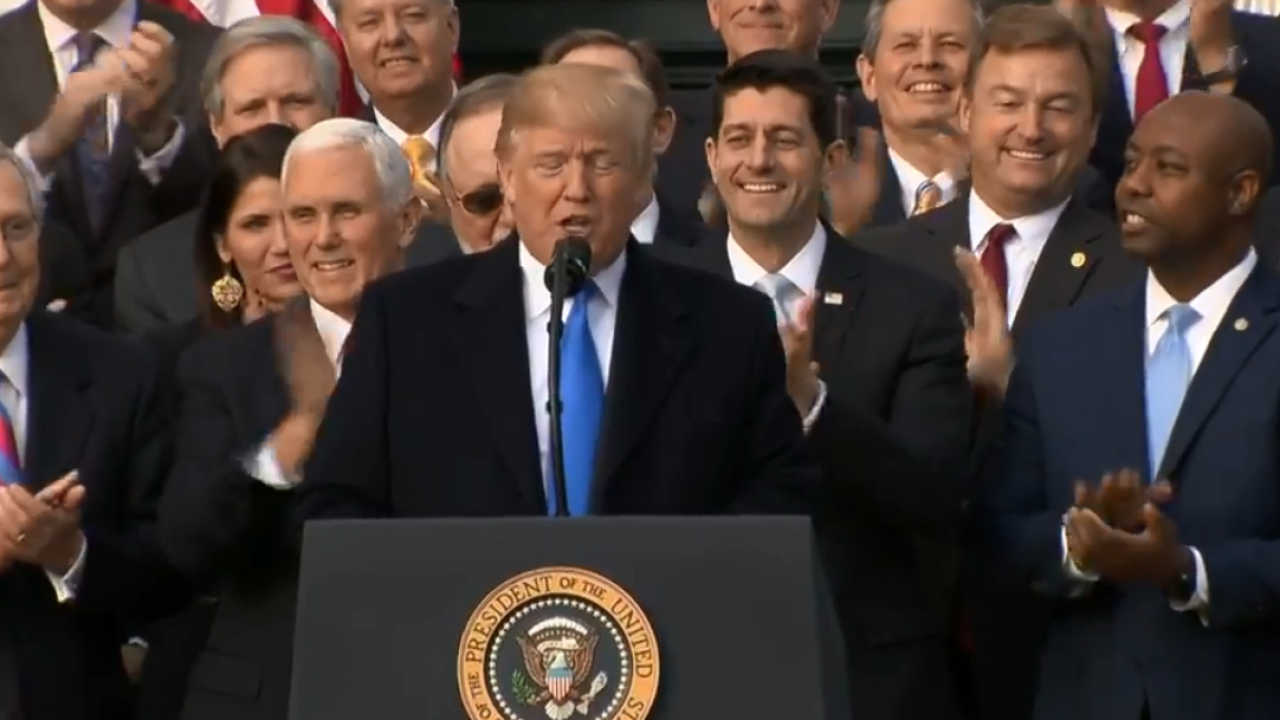 The House of Representatives gave final approval Wednesday afternoon to its major rewrite of the US tax code, voting a second time on the package after the Senate stripped out a couple of items early on Wednesday morning and sent the legislation back to the lower chamber.

The measure now heads to the President Donald Trump’s desk for his signature. Republican lawmakers are scheduled to join Trump at the White House on Wednesday afternoon to celebrate their largest legislative achievement of 2017.

In a vote in the early Wednesday morning hours, the Senate approved the final version of the first overhaul of the US tax code in more than 30 years. The bill passed along party lines, 51-48, with the final result announced by Vice President Mike Pence, who presided over the vote. The House passed the bill earlier Tuesday, but technical changes were made to it in the Senate.

Trump plans to thank congressional leaders for their hard work at the White House celebration, economic adviser Gary Cohn said at an event hosted by Axios.

The event will take on a “celebratory atmosphere,” Cohn said, but Trump will remind the Republican leaders from the House and Senate they “still have a lot of work to do.”

The President will not actually sign the bill Wednesday, however. The bill will not be “enrolled” yet — the formal term for when a final copy of a bill passed by both houses of Congress is sent to the White House.

Gov. McAuliffe released a statement about the tax bill passing:

“Today, Republicans in Congress sent the American people a clear message that they care more about enriching donors and corporations than serving families facing real economic challenges. At a time when corporations are posting record profits and workers continue to get squeezed, this bill tips the scale even further toward the wealthy and away from the middle class.

“The people of Virginia and this nation need leaders who will fight to create opportunity for all people, not just the wealthy and well-connected. The members of Congress who voted for this disastrous bill let us down.”

While Republicans cheer the bill’s passage, however, 55% of Americans oppose the plan, according to a new CNN poll. Just 33% say they favor the GOP’s proposals to reform the nation’s tax code.

Senate Majority Leader Mitch McConnell told CNN that Republicans will continue to try to sell the bill to the public.

“Absolutely. We’re looking forward to it,” McConnell said. “My view of this is, if we can’t sell this to the American people, we ought to go into another line of work.”

Trump said the “results will speak for themselves.”

“The Tax Cuts are so large and so meaningful, and yet the Fake News is working overtime to follow the lead of their friends, the defeated Dems, and only demean. This is truly a case where the results will speak for themselves, starting very soon. Jobs, Jobs, Jobs!” the President tweeted.

“When (the bill) gets in place, when people see their paychecks getting bigger in February because withholding tables have adjusted to reflect their tax cuts, when businesses are keeping more of what they earn, when they can write off their spending and hire more people, that’s going to change its popularity, I am convinced,” he told CBS in an interview. “So I think there’s just tons of confusion out there as to what this does or doesn’t do. A lot of people think it’s going to raise their taxes. So the proof is in the pudding, and I think the results will speak for themselves.”

Highlights of the bill

The plan — which critics say is heavily weighted to ease the tax burden on businesses rather than the middle class — drops the corporate tax rate down from 35% to 21%, repeals the corporate alternative minimum tax, nearly doubles the standard deduction for individuals and restructures the way pass-through businesses are taxed.

The bill keeps seven personal income tax brackets and lowers that tax rates for most brackets, including dropping the top rate to 37% from 39.6%.

For more on what exactly is in the bill’s policy, check out CNN Money’s full rundown.

The Joint Committee on Taxation found that all income groups will, on average, see a tax cut in 2019, though the projections worsen over time. In 2019, all taxpayers would see an 8% tax cut. The JCT, however, found that by 2027 taxpayers earning up to $75,000 would receive a tax increase — this would stem from the sunsetting individual rate cuts in the final GOP bill, along with the repeal of Obamacare’s individual mandate.