Treatment aims to curb rise in diabetes and hypertension 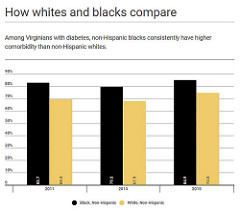 Marquita Manning, 42, was diagnosed with Type 2 diabetes and hypertension in 2013. Manning now enjoys her beloved “soul food” in moderation and carries a water bottle with her all around the operating room where she works as an anesthesia technician.

The chronic conditions contributed to her having a miscarriage at four months pregnant earlier this year. That difficult point in her life helped push her to regain control of her health.

She said that her lifestyle and eating habits led to her illness, but she recognizes that heredity also plays a role.

Both of Manning’s parents suffer from diabetes and hypertension. She watched them cope with those diseases when she was a girl but never thought that one day she would face the same day-to-day struggles.

“All I ever saw was my Mom taking pills every day. I never knew – I didn’t think that it would affect me,” Manning said.

Back then, she didn’t realize that the conditions were hereditary in her family. “At the time … when you’re young, you don’t really even understand the seriousness of it,” Manning said.

In Virginia, 85 percent of African-Americans with diabetes also have high blood pressure, according to the most recent data from the U.S. Centers for Disease Control and Prevention. Of non-Hispanic whites with diabetes, about 75 percent also have hypertension.

But the racial gap is shrinking. In 2013, the percentage of diabetics with comorbidity was about 80 percent for blacks and 68 percent of whites – a difference of 12 percentage points.

A recent shift on how doctors diagnose hypertension will increase the number of Americans with the disease. People will be diagnosed with stage I hypertension if they have a blood pressure of 130 over 80, instead of 140/90.

In 2015, 75 percent of women and approximately 76 percent of men with diabetes in Virginia had high blood pressure – and with the new definition of hypertension, those numbers are likely to rise.

Dr. Melanie Bean, director of clinical and behavioral services at the Healthy Lifestyles Center in Richmond, said genetic factors for ethnicity or race play a role in the development of diabetes or hypertension, but how patients live day to day also impacts the progression of the diseases.

“Then your lifestyle choices – which might be driven by policies, what you have access to or what you’ve learned in your family and culture – those things might exacerbate or reduce the risk,” Bean said.

Education is the first step in the fight to slow the increase in the prevalence of diseases relating to obesity.

Families are referred to the Healthy Lifestyles Center, part of the Children’s Hospital of Richmond at Virginia Commonwealth University, to help youngsters understand the risks associated with obesity and put them on track for a better quality of life.

Weight management is the foundation of the center, which applies customized approaches to each patient, offering treatment by psychologists, psychiatrists, dieticians, exercise physiologists and pediatric specialists.

No patient is treated exactly the same as another, Bean said. The center recognizes continued success comes in a variety of forms.

Just as Manning noted that growing up in a low-income household may have led to her early unhealthy eating habits, Bean sees many patients who may not have much accessibility to nutritious foods.

“When we think about things like food access and being healthy and budget-conscious, we’re thinking about the fact that there’s a lot of kids who live in a food desert or don’t have access to a good grocery store,” Bean said. Even if healthy food is available, parents might not have been trained about its importance, she said.

The center also focuses on community outreach and government policies. Weight management and chronic disease treatment and prevention can’t stop when the patients leave the center; creating a healthier environment for the larger population is important to Bean and her colleagues.

For the center’s young patients, a healthier environment includes the schoolhouse.

Richmond Public Schools has implemented the Community Eligibility Provision, which allows students to receive a free breakfast and lunch throughout the school year without an application or fee. The meals follow the MyPlate guidelines from the USDA, which includes requirements for fruits, vegetables, protein, dairy and whole grain.

Much of Bean’s time is spent on research. She is working on a study that involves what students actually eat during the day.

There have been policy disagreements within the federal government over whether the dietary guidelines are causing more food waste, but Bean said the debate could depend on a student’s socioeconomic status and food availability at home.

“So if you’re not sure where your next meal is coming from … I think it’s kind of lent itself towards ‘eat when it’s available,’” she said. “The majority of their calories are coming from school, so really being able to evaluate what these changes in the school environment [are] doing to their intake is really key to understanding and, really, guiding their health.”

For Manning, educating herself about her health conditions pushed her to take action regarding her diet. She said she has cut out sugary foods and eats carbohydrates, like pasta, in moderation. She has lost 25 pounds since being diagnosed and is no longer taking medication for diabetes or high blood pressure.

“You just have to make a decision that you want to do what’s right,” Manning said. “You’re going to want one way of living, but when they tell you that this is life, that this is your life and you have to make these changes, you just do it.”