HENRICO COUNTY, Va. -- To anyone driving by, the Pinewood Restaurant in Eastern Henrico looked like the most popular spot in town Friday night.

But, after 32 years, the restaurant had to close earlier this month when half of the heart and soul of the place passed away.

"If Betty were here right now she would hug you and kiss you on the cheek before you left, and she doesn't even know you," Henrico Police Officer Billy Grimmer said. "It was like losing your own mother, it was very hard."

So why the crowd at the restaurant if it's closed?

Betty and Tody Butner's customers, many of them members of the Henrico Police and Fire Departments, couldn't stand to see their favorite place close, and Tody without his Betty and his restaurant, CBS 6 reported.

"On behalf of everybody we don't want you to close down, we want the restaurant back open," Officer Grimmer said.

So, they all got together and raised more than $6,000 so Betty could be cremated and kept in an urn, and so Tody could re-open the Pinewood.

"Y'all are the best," Tody said when handed the money.

Tody, who is too humble to speak to the media, shared his feelings with one of his best customers, Officer Grimmer.

"I feel wonderful about it. It's nice to have good friends and the whole family and all the workers the whole nine yards," Tody Butner said.

The Pinewood Restaurant can now re-open on January 2nd, and his daughter will take over for Betty in the kitchen.

Still, everyone knows who remains in charge there: Betty.

"You can feel her in the room now. I guess in the back of my head I can hear her saying something," one of his Tody's best friends, Mike Elliott, said.

Gone, but her legacy lives on thanks to these customers, or should we say friends.

"That's just something you do from the heart, just friends helping friends," Officer Grimmer said.

Nelson's Funeral Home also stepped up and helped out the family.

Officer Grimmer said they gave them a large discount on the cremation and urn. 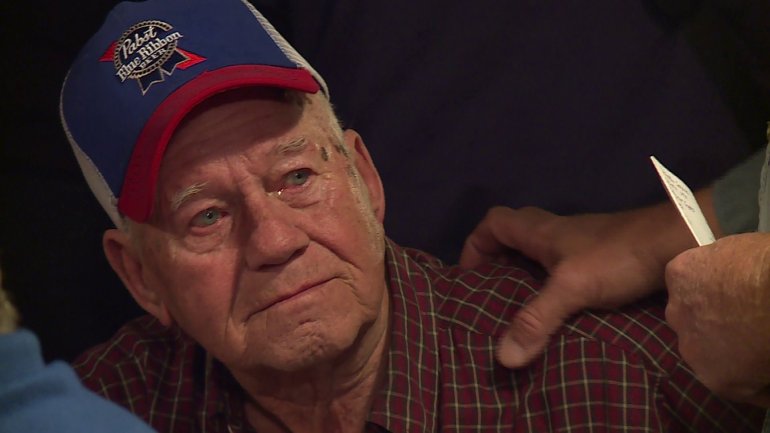