"You have to be security conscious and security minded anytime you're traveling," said Ike Bingham, a traveler at the airport.

The TSA line took a halt when a .22 caliber revolver was found in a Chesapeake man's carry-on bag on December 22. 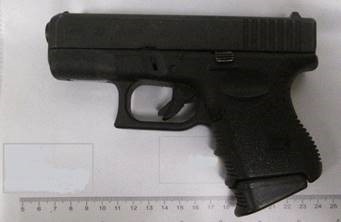 Both weapons were detected through the x-ray machine and police quickly confiscated them.

Although they don't think both incidents are related, travelers told News 3's Aleah Hordges it's unsettling to hear.

Bingham said, "Someone is caught with a handgun I think they should be punished to the max. As a matter of act they should travel banned. they shouldn't be able to travel anymore."

Norfolk International Airport says this is the 11th handgun found this year and 14 guns were found in 2016.

TSA wants to remind people how to travel safely with your handgun including other items, especially if you're flying back home after the holidays with gifts.

"The four ounces and under? I just stick without them," said traveler Mike Wade. "I'm not bringing any wine or anything so I keep it simple so I don't have to deal with it really."

Tips for traveling; Guns can't be placed inside your carry on bags, instead they should be in checked baggage only. Guns should be unloaded and packed in a hard locked case.

Ammunition should also be packed in checked bags separately in a hard case and locked.

People at Norfolk International Airport say everyone should do their part between travelers and TSA officers to keep it a safe environment.

"A lot of people complain about the time that it takes them to get through the security lines, but oh well it's all about the safety of the people," Bingham added.

As a reminder, individuals who bring firearms to the checkpoint are subject to federal civil penalties of up to $13,000. A typical first offense for carrying a handgun into a checkpoint is $3,900. The complete list of penalties is posted online here.

TSA has details on how to properly travel with a firearm posted on its web site here.