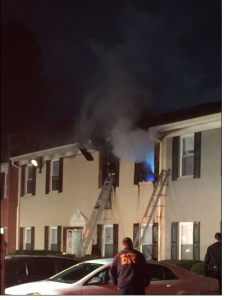 According to NNFD officials, dispatch received a call at 4:41 a.m. that an apartment was on fire at the 800 block of Sundown Way.

The fire was under control within 15 minutes, damaging a total of four apartments because of fire, smoke and water damage.

The cause of the fire is unknown and still under investigation.

No injuries have been reported, and the Red Cross is assisting those in need.