He became a symbol of hope after he posted a video of himself playing his family’s piano in a room flooded by Hurricane Harvey. Now Aric Harding has a brand new keyboard to play.

It’s been four months since Harding, a father from Friendswood, Texas, posted the video to Instagram. Thanks to Grammy-nominated singer-songwriter Vanessa Carlton and Yamaha Corporation, Harding’s nearly rebuilt house now boasts a new piano for his family to enjoy.

In Friendswood, a town about 20 miles south of Houston, an estimated 350 homes were destroyed by more than four feet of floodwater. According to city reports, 71 businesses were damaged and almost 300 residents were left unemployed. Harding returned to this devastation five days after the storm hit, hoping to retrieve any toys to comfort his seven children, who were sheltered in a nearby home. His 14-year-old son Rylor, a passionate musician, was also worried about the fate of the family’s cherished piano.

Finding the piano intact, Harding sat down on the piano bench that was just above waterline and began to play. He shared the moment on Instagram with the caption, “I think it’s all finally sinking in a little. What we used to have going as a city is gone. I really think God is going to do something completely new here. I am excited to see the new beauty in the suffering.”

By the end of the day, thousands of people had viewed the haunting video online, including Grammy-nominated singer-songwriter Vanessa Carlton, who said it moved her to tears. Carlton tweeted CNN, “This story is so important. Is there a way I can get his contact info? I’d like to get him a replacement piano if this one doesn’t make it.”

Carlton contacted an executive at Yamaha, a musical manufacturer known for its grand pianos that sponsors the singer. Yamaha offered to replace Harding’s piano. Tom Sumner, senior vice president of Yamaha Corporation, watched Harding’s performance on Instagram and called him later that day.

“I told (Harding) that we’d get him a new piano whenever he got things up and running. Music sort of transcends everything. It was kind of mournful seeing him sitting there in the water playing the piano,” Sumner told CNN.

On Thursday, Harding and his son drove to Houston’s Fort Bend Music Center to pick out their piano — an upright Yamaha with a lock for the lid that covers the keys. Harding said that feature will help protect the instrument from spills, pencil marks and other casualties that come from having seven children. Harding’s father, a longtime piano technician, helped guide them through the selection process.

“Really my whole life we have been around pianos. It’ll mean a lot to have the family piano back. It was such a major piece of the house,” Harding said. “I’m hoping that it’ll look like a bit of a full circle — a continuation of restoration. Hopefully it’ll also look like a piece of generosity because we didn’t buy the piano. To have one given that is brand new — it’s so nice.”

Carlton was thrilled to see her hope for the Harding family become a reality.

“I’ll never forget the moment I saw that video of Aric playing his piano in a flooded living room,” Carlton told CNN. “I couldn’t go back to my normal day after seeing that image. I’m glad I didn’t. I am blown away by everyone who came to the plate and made this happen for this family! Thank you to Yamaha and CNN and everyone who contributed their time and efforts. This world is a pretty spectacular place sometimes.”

The Harding’s new piano was delivered on Friday. Harding was quick to find a silver lining in the reconstruction of his family’s house. New interior walls were built to create a music room where Harding and his son can play the piano and guitar.

“There’s so much to that and I think that there’s a newness to our entire house,” Harding said. “From the 10 years that we had lived there, it had been a collection of our life. It’s all wiped out and this is all new. Hopefully this is a good, fresh start for our family.” 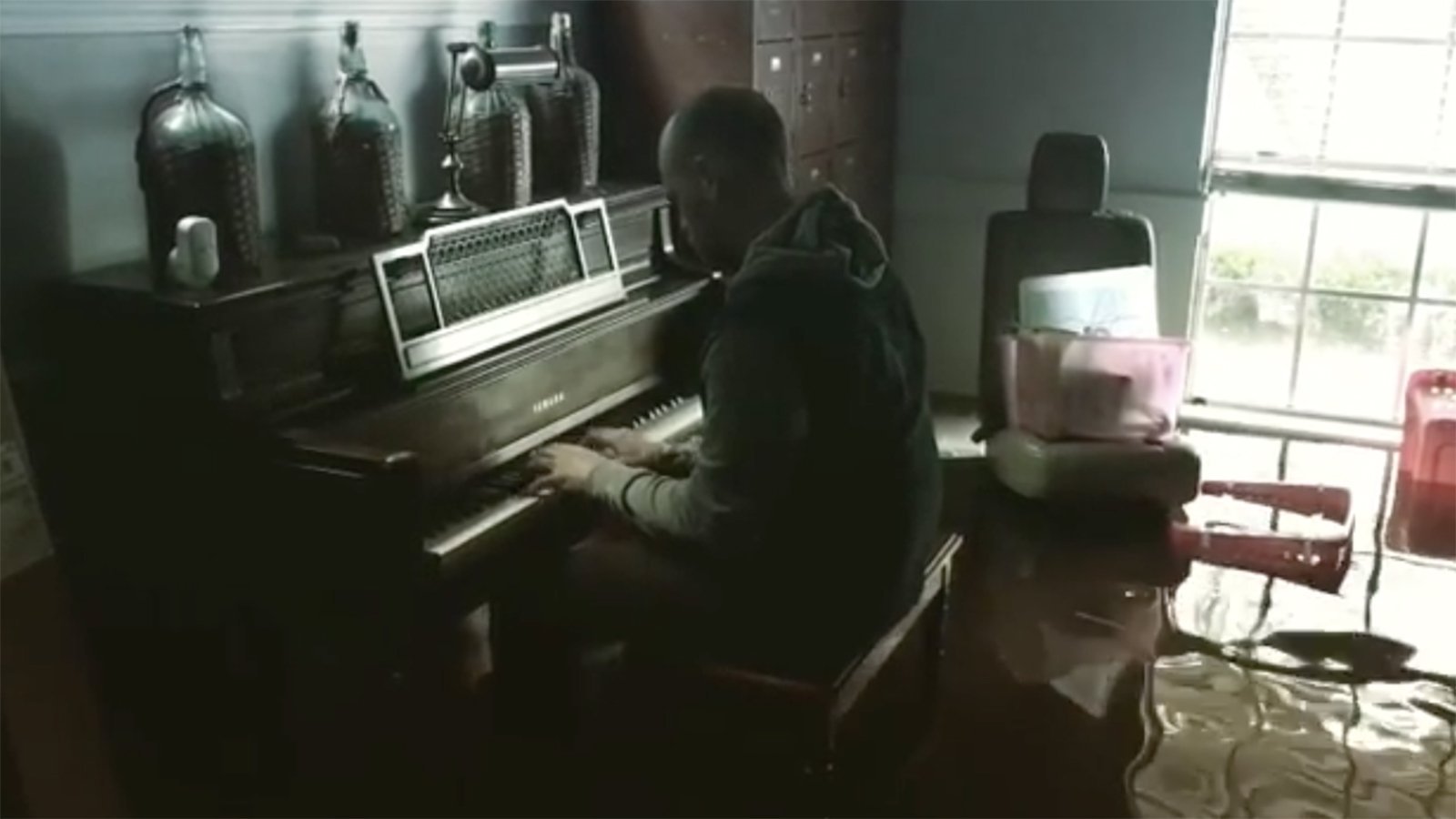