Stage coach: How the College of William and Mary helped groom 25 percent of head coaches in 2018 NFL playoffs

A 17-year-old George Washington received his surveyor's license through William & Mary and would return as its first American chancellor. Thomas Jefferson received his undergraduate education at the Williamsburg institution, as did presidents John Tyler and James Monroe.

While Washington, Jefferson, Tyler and Monroe helped shape our great nation, William & Mary can also take credit for grooming key figures who will chart a course through the 2018 NFL postseason.

Of the dozen teams qualified for the NFL playoffs, two of the 12 feature a head coach with an undergraduate degree from William & Mary.

"We take a lot of pride in it," Laycock admitted. "It's really neat. Tons of our former players have gone on to be very successful in other fields, obviously. But [Tomlin and McDermott] bring a lot of notoriety to our football program and they credit our program for some of their success. For a school like William & Mary, as strong of an academic university as we are - with the prestige and the tradition, for these guys to have this kind of presence in the National Football League is impressive to me."

Tomlin and McDermott were teammates at W&M during the 1994 season. However, they are not the only current NFL head coaches with Tribe ties. Atlanta head coach Dan Quinn, who guided his Falcons back to the postseason in 2018 after a trip to the Super Bowl last season, launched his coaching career in Williamsburg.

Months after graduating from Salisbury State, where he was a four-year starter on the football team and also lettered in track and field (hammer throw), Quinn served as a defensive assistant under Coach Laycock in 1994.

Yes, that means during the '94 season, Tomlin (wide receiver), McDermott (free safety) and Quinn (defensive assistant) were all a part of the William & Mary football program. The Tribe went 8-and-3 that year.

"Dan is a great guy," Laycock explained when discussing his former pupil. "It was very evident to me that he had what it takes to be a successful head coach. He was mature beyond his years. I'm not surprised by how well he's done."

As for his former players, Tomlin (class of '95) and McDermott (class of '98), Laycock says Sean definitely wanted to pursue a coaching career. In fact, the former walk-on spent the 1998 season as a graduate assistant on Laycock's staff.

Tomlin's track wasn't as clear for Laycock, a W&M alumnus himself. He says the Denbigh High School product was a "well-rounded, outgoing, friendly guy" who was into football - but also into a lot of other things.

"You don't normally come to William & Mary to be a head coach in the NFL," Laycock said smiling. "I knew they would both be successful in whatever area those chose."

Known for its Presidents, there's now a new precedent for launching a coaching career that eventually leads to the NFL postseason: start at William & Mary.

"The whole William & Mary community should be proud," Laycock noted. "They are fine representatives of the football program and the University. I'm honored to call them friends."

McDermott's Bills, the sixth seed in the AFC playoffs, take on Jacksonville Sunday in the AFC Wild Card Playoff. The game will be broadcast live on News 3 at 1:05pm.

Quinn's Falcons, the sixth seed in the NFC playoffs, draw the L.A. Rams Saturday in the NFC Wild Card Playoff.

Tomlin's Steelers, the second seed in the AFC playoffs, earn a first-round bye. Pittsburgh will host either Jacksonville/Kansas City/Tennessee Sunday January 14 at 1:05pm in a game to be broadcast live on News 3. 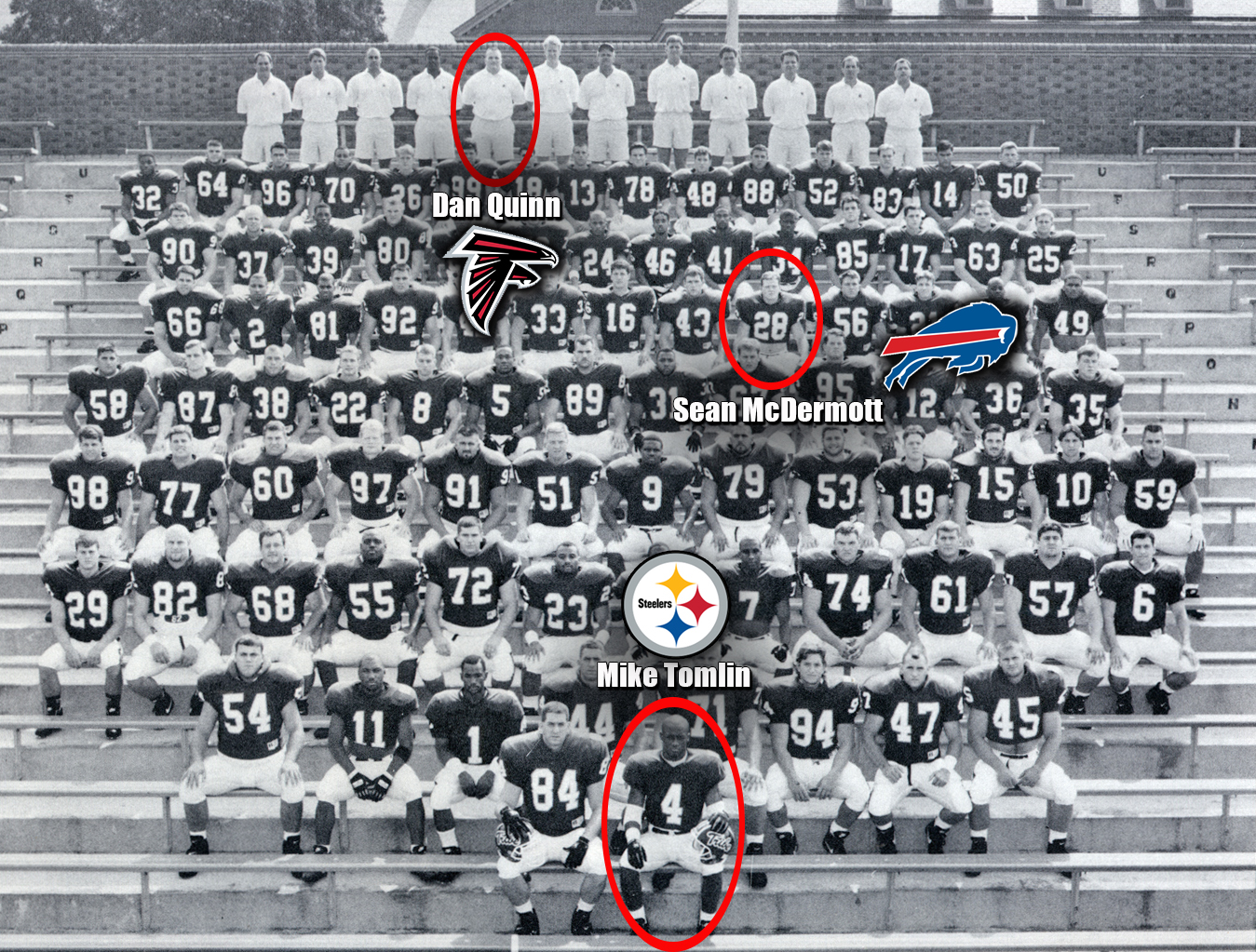