Sarah Barr's kids attend Butts Road Primary, and when she picked up her 7-year-old daughter Mia because Mia was constantly coughing in the middle of the day Tuesday, she heard something unexpected.

"She said, 'Mom did you know it was raining inside the library today?' I said 'Raining?' and she said, 'You know we heard this loud noise and all of a sudden it was just raining,'" said Barr.

Mia s describing water leaking from the ceiling. Barr said she first heard about water damage to the school Jan. 10 after the blizzard.

"It was a recording from the principal talking about water damage, everything was fine, everything was handled and the kids had a great day," said Barr. But according to accounts from other parents, that's not what happened according to Barr. "Her teachers were frantically running around frantically looking for buckets, trashcans, ran out of trash bags to protect stuff. It was just very hurry up protect what you can as fast as you can and Thursday they ere back in school like nothing happened." 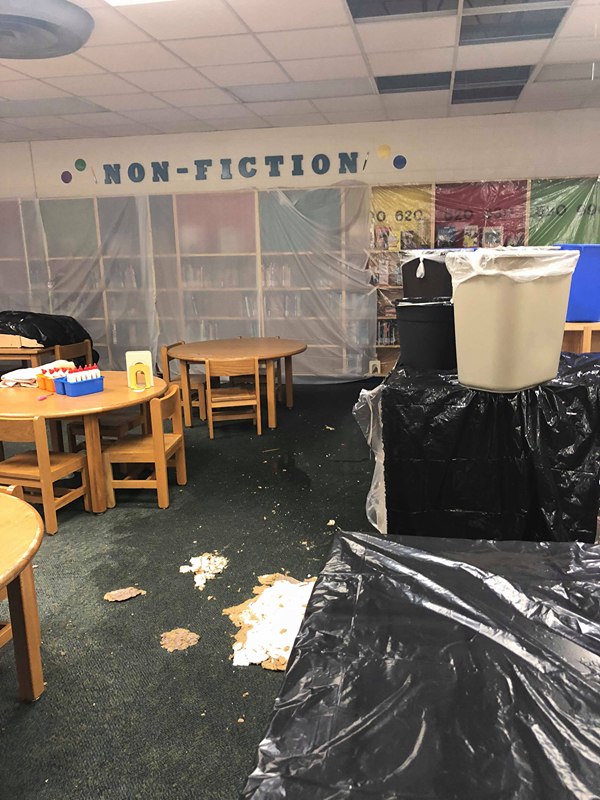 However, she said that Friday when she picked up her kids from their after-school activities, she noticed what she said are unsafe conditions.

"There were trash cans, all over in all the hallways. A majority of the ceiling tiles were gone, wires were hanging down. One was close to my face," said Barr. She also described a foot-wide gap where students and staff could walk in one of the busiest hallways in the school. She offered to help the teachers put their classrooms back together to bring back a good learning environment for students.

"Well, it was supposed to be fixed last week. Well, it rained this week, what happens if it rains next week?" said Barr.

Due to the past snowstorms, the amount of snowfall  remaining on the roof resulted in leaks throughout the building.   Since the storms occurred appropriate school staff and contractors have been continuously working on and cleaning the facility.

However, Barr is worried students are still allowed to come to school.

"School doesn't let you come because of snow on the ground because of safety reasons. But they're going to let your kids go into school when water is dripping and the ceiling is caving in on wires and probably mold is growing in there. Is that safe for them? How is that safe? It's not," said Barr.

Moving forward, Barr is concerned about Mia's health. She picked up Mia from school Tuesday because she was constantly coughing in school, but wasn't sick. Mia has a mold allergy.

"She did really well over the weekend. The dark circles under her eyes were gone, she wasn’t breathing funny, she wasn’t stuffy, everything was great," said Barr.

Until she went back to school this week. The family spent Tuesday night in the emergency room and after a doctor's appointment Wednesday, Mia has been prescribed stronger medication. She has to see a pulmonary specialist and allergy specialist in the next few days.