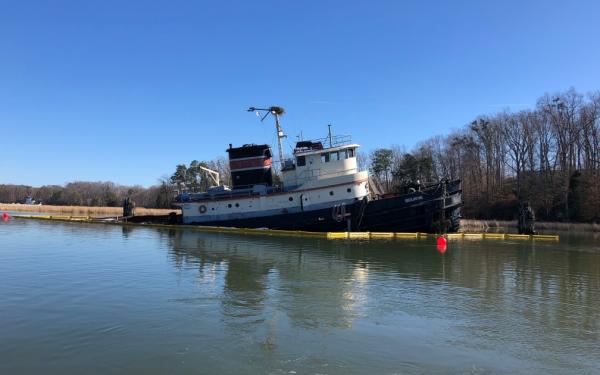 NEWPORT NEWS, Va. – The Coast Guard oversaw the response to an oil spill that was caused by a partially submerged tugboat in Newport News on January 24.

Watchstanders at the Coast Guard Sector Hampton Roads Command Center were notified about the spill after another tugboat in the area noticed the disabled vessel and oil spill.

As of Sunday, The Coast Guard, Newport News HAZMAT team and Virginia Department of Emergency Management were still cleaning up the spill, deploying sorbent pads and boom in effort to clean it up.

The owner of the vessel was not able to be reached when Coast Guard officials called.

The Oil Spill Liability Trust Fund was opened to pay for response efforts.

The Coast Guard issued a safety marine information broadcast to encourage mariners to remain clear of the waterway near the site until operations have been completed.

Now the Coast Guard will be tasked with draining the rest of the oil in the tugboat’s oil tanks.