VIRGINIA BEACH, Va. - A 15-year-old boy in Virginia Beach was only able to ride a stationary bike inside his house until Tuesday.

News 3 was there as Zachary Jefferson saw his new blue tricycle for the first time.

Loved ones call him “Z”. His mother, Denise Jefferson, said she is overjoyed by the new wheels and is especially grateful to Deputy Ashley Swenson with the Virginia Beach Sheriff’s Office.

Z is non-verbal and has Down Syndrome and Autism.

His mother helps care for him and other children with special needs in the community, according to the Sheriff’s Office.

Swenson said Mrs. Jefferson gives so much to others and that she wanted to return the favor. 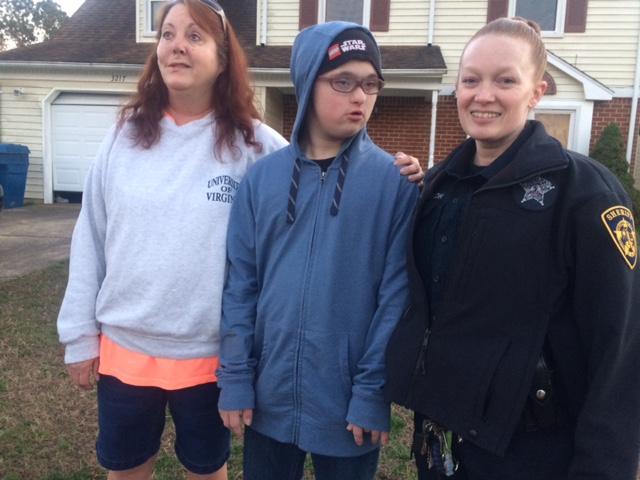 Z loves to ride bikes. His mother said he started riding when he was three years old and got his training wheels off at five, but she said she needed to get rid of the bike because Z went too fast and didn’t understand the dangers of cars. She said despite his love for riding, the activity was not safe for him.

Denise Jefferson wanted her son to be able to do what he loves and ride outside, but she didn’t want him to get hurt.

A few months ago, Deputy Swenson came across an online post his mother made.  It stated that she wished she could buy a bike suitable for her son, but many of them are extremely expensive.

Deputy Swenson did some research and looked into a specialized tricycle called a Worksman SIDE-BY-SIDE "Team Dual" Trike, which costs roughly almost $2,000.

Deputy Swenson took action by starting a fundraiser. She said within a week, the community - along with the Virginia Beach Police Benevolent Association -donated enough money for Z to get his tricycle.

It arrived at the Virginia Beach Sheriff’s Office Tuesday afternoon.

“I've been sitting at my desk anticipating it showing up all day long,” said Deputy Swenson.

Now the mother and son can ride side by side safely, whenever and wherever they want to go.

Deputy Swenson took action for one teen to make his dream come true.

"It's wonderful. Anything we can do around the community," said Swenson.