10 witnesses admit to lying in a Newport News murder case: Hear from the man convicted of the crime 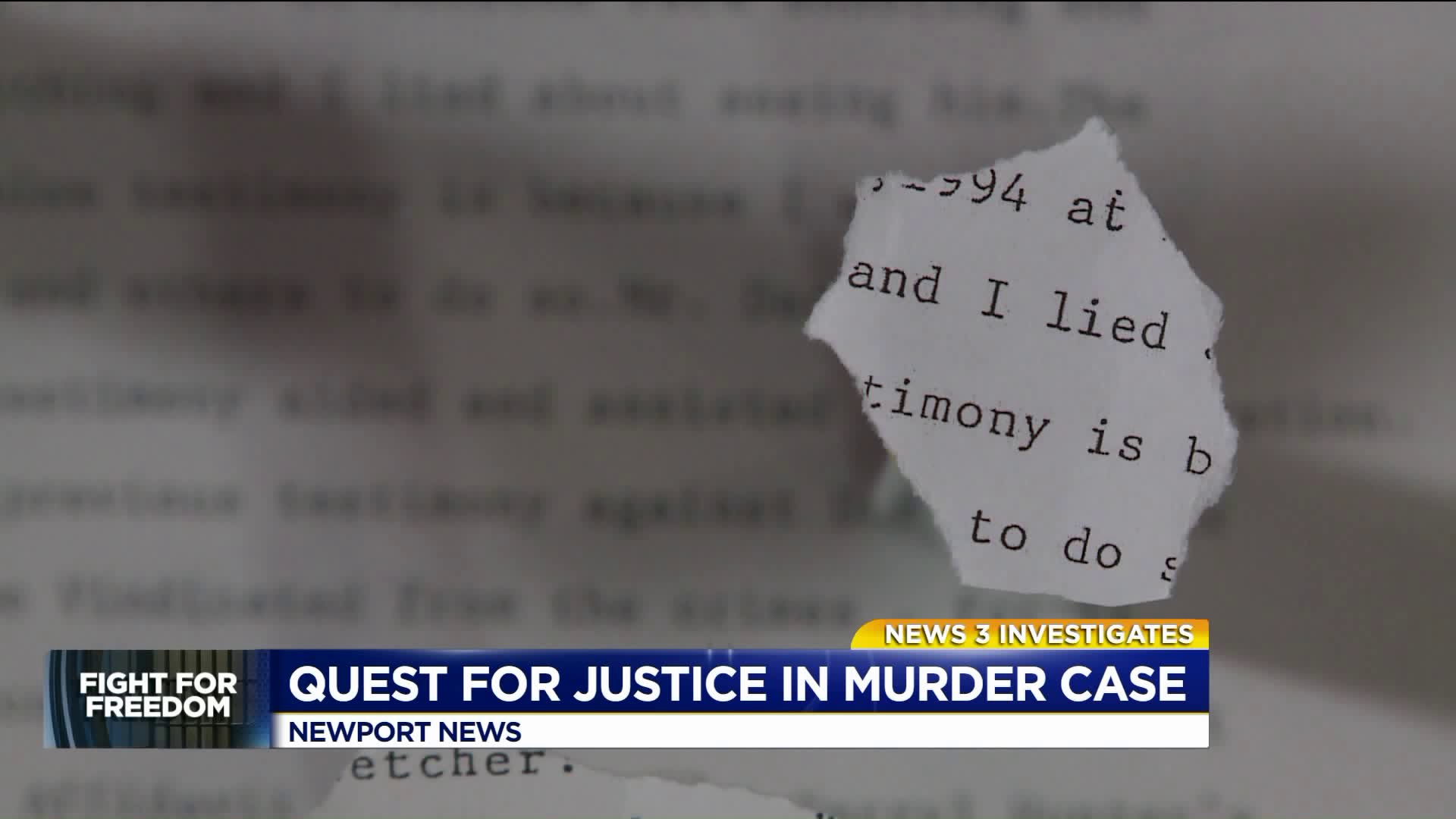 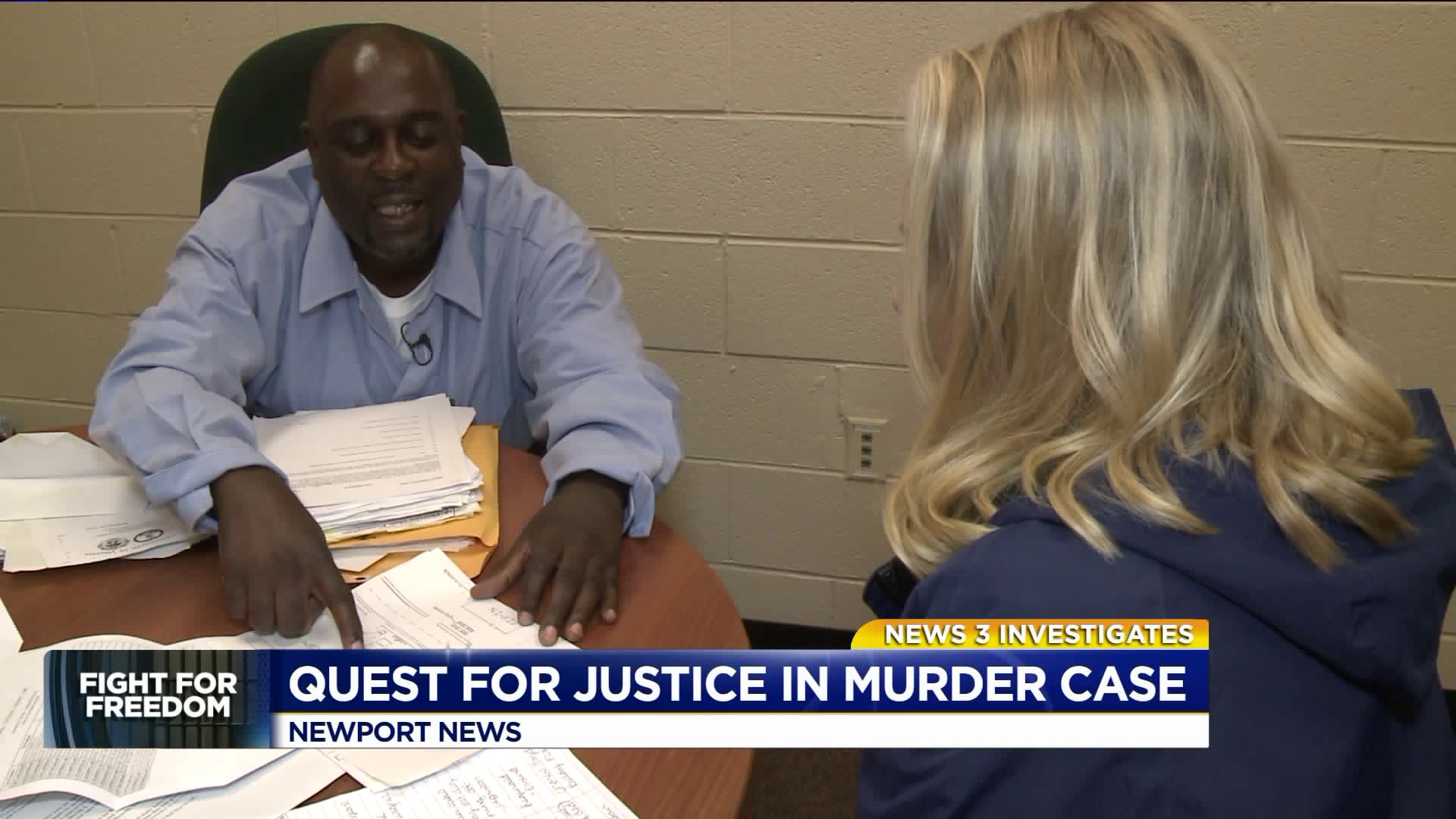 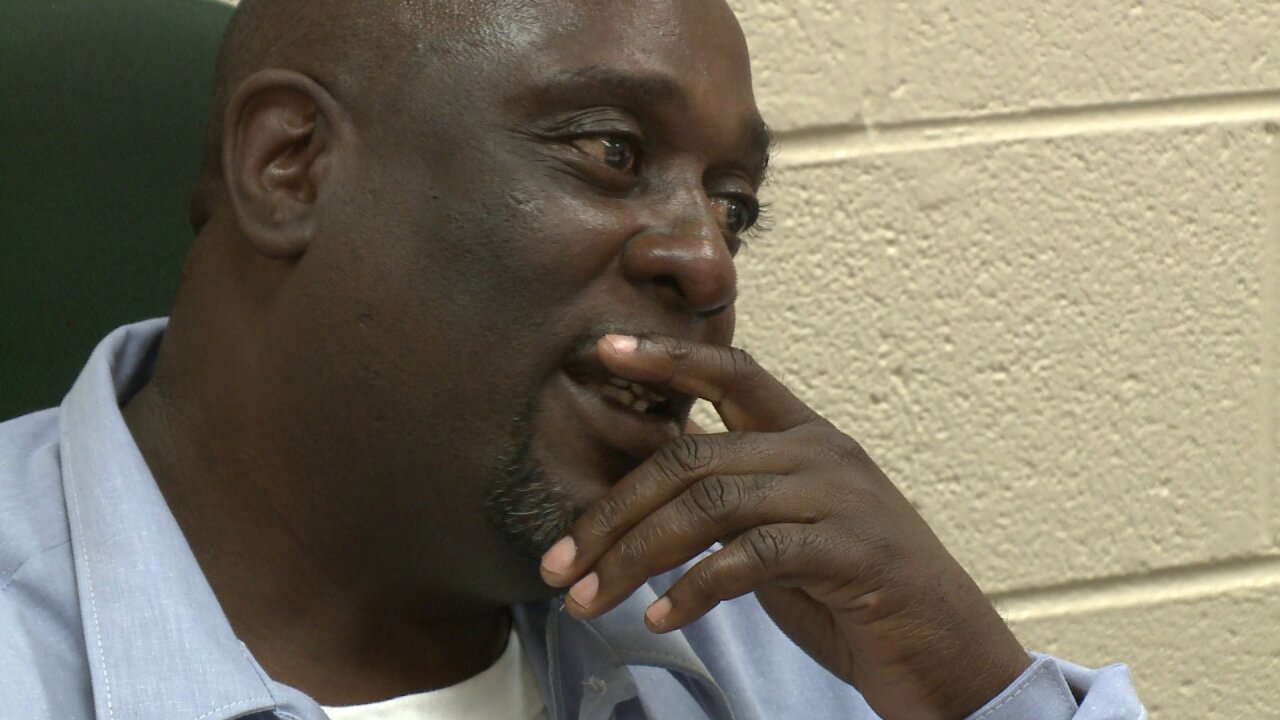 NEWPORT NEWS, Va. - Nathaniel Pierce has been sitting behind bars since 1994.

When asked why he thinks he was blamed he said, “I just think they wanted to close their books."

He was tried by a jury in the Newport News Circuit Court for the murder of a man and the wounding of two others.

The trial lasted two days and he was found guilty and sentenced to life behind bars.

“For the police to have people say you’ve done things that you didn’t do and you know you didn’t do them and keep your sanity after all this time it is hard. It’s real hard,” Pierce said.

Nathaniel Pierce, his younger brother Darryl Hunter and their neighbor Reginald Fletcher are all locked up for the same crime.

The brothers' mother said it has not been easy living without seeing her sons, “I can’t even put that into words. But I have never lost my faith that God one day will let the truth reveal."

When someone is found guilty of a crime and locked away, too often their voice is locked away with them. Since his conviction, Pierce has never stopped fighting to have his voice heard using neatly written letters as his megaphone.

Those letters made us take a deeper look into his story.

“Convicted for that crime that happened July the 12th, 1994, on a Tuesday that I will never forget,” his mother said.

According to witnesses four teens were listening to the radio on a front porch in the Newsome Park public housing complex in Newport News when a car with several men drove up.

Witnesses say three to five men got out of the car and started shooting at the teens on the porch. “Somebody reached out the side window and shot a gun into the air,” one witness said.

Over 100 shell casings were found at the scene. A bullet hit 19-year-old Steven Smith in the head, killing him instantly.

“The night that this crime happened I was walking down the street and when I walked over to the next street a little boy ran up to me and said call me a cab please call me a cab and send me home,” Pierce said.

We found that boy - 13 at the time - now grown up and a father himself.

“The older I get, the worse it affects me because I couldn’t imagine being locked up for something I didn’t do,” the witness said.

He asked us to hide his face because he says the real shooters are still out there free. He also told us after seeing the shooting he was chased several blocks by one of the shooters.

The witness said the shooter eventually got back into the car with the other shooters and drove away. 15 minutes later he saw Nathaniel who is nicknamed, Moochie.

“I am still trying to figure out what I am going to do and once Moochie got a little closer I seen who it was and I was like boom I knew him I got out of the car like Moochie I need a ride man somebody was just doing some shooting,” the witness said.

According to court documents filed by his attorney at the time, Pierce was convicted based off witness testimony. Since his trial, more than 10 witnesses have come forward and signed sworn statements saying they were coerced to lie.

“Everybody knows the truth, it wasn’t them,” witness #2 said.

This witness testified during the trial that Nathaniel Pierce was one of the shooters and his testimony helped seal Pierce's fate.

“During Nathaniel Pierce’s trial I falsely testified that I saw Nathaniel Pierce on July the 12th in the Newsome Park shooting and I never saw this man do anything," witness #2 said.

Pierce was originally convicted in 1995 and given a retrial in 1996 because his defense attorney wasn’t notified the prosecutions key witness Clyde Dargon was also a police informant. Dargon identified Pierce, Hunter and Fletcher as the shooters. Dargons own wife and mother-in-law later told a private investigator Dargon was with them, inside their home at the time of the shooting.

“He said I was standing right there when I was supposed to have shot somebody but he wasn’t standing out there with her and I have the paperwork to back it, “Pierce said.

It’s been an ongoing battle for Pierce. In 1997 his lawyer informed him that an appeal they were working on was never filed. In the letter he apologized saying it was his fault for never double checking the paperwork went through.

The Attorney General asked the police department to investigate Pierce’s case after he wrote several letters in 2002. Pierce said the assigned detective worked on the case for several months, until he says his files somehow were misplaced.

He told Pierce he didn’t want to start over.

Then, in 2014, a judge denied Pierce’s request to have shell casings and clothing found at the scene tested for DNA.

We have several letters between Newport News Attorney General Howard Gwynn and Pierce that date back to 1997 until most recently April 2017.

In his letters and to us over the phone Gwynn has said the same thing. He said he’s never seen any affidavits and that his door is always open to Pierce.

“I forgive everyone that lied on them that sent them to prison for something they didn’t do. I forgive them because they have a higher power to answer to then me,” Pierce's mother said.

In 24 years, Pierce has had two trials, been to six different prisons, he’s had three lawyers, more than 10 signed statements of witnesses saying he isn’t guilty and he’s written hundreds of letters.

Through it all, Pierce has only said one thing from the very beginning. That he is innocent.

After our investigation a shocking twist of events led to a big break for Nathaniel.

Attorney Benjamin Crump has agreed to assist Nathaniel in his fight for justice - a name you likely know from national cases like Trayvon Martin and Michael Brown.

“These witnesses are saying they were coerced to lie and they were made to give false witness identifications against an innocent man. If that is true it is just a travesty of justice,” Crump said.

Crump is not only a national civil rights lawyer; he's also the president of the National Civil Rights Lawyer’s Association.

“I do civil rights work around the country in some of the high-profile, important cases at this time in America,” Crump said.

Crump, who is also on the board for the innocence project says the organization believes there are over 100,000 people sitting in prison for crimes they didn’t commit.

“To you and your news station, it is vitally critical that we expose these types of injustices because if not for the media shining a light on these injustices who knows how many will die in prison without having justice,” Crump said.