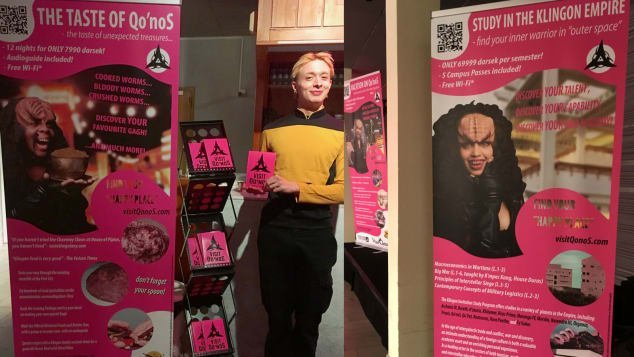 They’re a ruthless species of extraterrestrial warriors from the Omega Leonis Star System eager to build bridges with humans and attract them to their planet.

So where on Earth would they choose to open their first tourist center?

A small theater in the Swedish capital has been transformed into the world’s first “Klingon tourist center” in a playful bid to boost tourism in Qo’noS (pronounced “Kronos”), the fictional home planet of the alien species from the “Star Trek” franchise.

The foyer is filled with information stalls promoting everything the imagined planet has to offer potential travelers as well as maps, brochures and visa application material.

Once inside, guests are treated to live performances of Klingon Opera and martial arts battle re-enactments from Klingon ambassadors Ban’Shee, Mara, Morath and Klag.

There’s even a 3D replica of the Klingon capital, First City.

“The Klingons have sent drawings of what they would like the center to look like. And we have a human team that has tried to create that,” Nils Poletti, artistic director at Turteatern, tells CNN Travel.

“They are very difficult to work with. But after a while you learn how to interact with them.”

As “Star Trek” fans will know, the recurring alien antagonists are far superior to humans in strength and are recognized by their enlarged foreheads and brutish demeanor.

“The production is the result of a cultural exchange program between Turteatern, the Klingon Institute of Cultural Exchange and the Klingon tourist department,” says Therese Jonasson, a spokesperson for the theater.

“This is the first time something like this has been set up.”

The proceedings begin with a welcome from stony faced commander Ban’Shee, who greets visitors from a high metal throne.

“Officially, we are hoping for an increase in terra tourism to Kronos,” she tells CNN before curtly explaining that she has reservations about welcoming humans to Qo’noS, as they are like “rats” in comparison to the Klingons.

Ban’Shee and her fellow ambassadors speak both English and Klingon during the production, with their elaborate costumes helping to establish an otherworldly aura around them.

The alien race’s fictional language was created in 1982 by US linguist Marc Okrand for the 1984 film “Star Trek III: The Search for Spock.” Some fans have since learned the tongue through books like Okrand’s “The Klingon Dictionary,” which is said to have sold more than 300,000 copies.

Those who attend Visit Qo’noS will be treated to language lessons as well as tips on the best way to interact with Klingons, who are notorious for refusing to adhere to human social conventions.

But according to the organizers, this delegation seeks to reveal a more cultured side to the species.

Visitors are also given talks on the history of the Klingons to challenge the longstanding notion that they are simply brutal warriors.

The show concludes with a tasting session of blood wine and Gagh, a typical Klingon delicacy “made from worms.”

Like many “Star Trek” fans, Visit Qo’noS artistic director Poletti has been fascinated by Klingon culture for a long time and thinks there’s much to be said for their “refreshing” straightforwardness.

“A Klingon doesn’t try to fit in. They take up space and they demand it,” he says.

He hopes visitors will take away a positive message on intercultural differences from the production.

“In Sweden right now, like in all of Europe and perhaps the entire Western world, there is a lot of talk about integration, and how others should adapt to us,” Poletti says.

“But here, it’s ‘the others,’ the Klingons, who show us their perspective on things and who they are, instead of us telling them to be in a certain way.”

From “Star Trek: The Next Generation” enthusiasts, to old school followers who champion the original 1960s series and new devotees of the latest TV series “Star Trek: Discovery,” fans of the franchise are known for their dedication and the production has attracted both “Star Trek” enthusiasts and theater buffs from Sweden as well as Germany and the United States.

With such global interest, it’s not entirely clear why the Klingon chose to be beamed to a small Northern European country.

Poletti’s guess is that they feel right at home in the sometimes harsh climate.

“The weather is very similar to the one on Kronos, where it is either very cold or very hot, just like the Swedish weather,” he says.

Of course, it helps that there are a large number of Swedish “Star Trek” fans, who have even been known to take wedding vows in the Klingon language.

The country is home to a number of fan clubs like Stockholm Trekkers, and Klingonska Akademien, a Klingon language academy, which helped the theater translate the plays and operas in the production.

Post show, guests can mingle and take selfies with Bhan Chi and the other ambassadors Mara, Morath and Klag from the Klingon House of Duras.

Once the production at Turteatern ends, the Klingons will return home and prepare for Earthlings to arrive at this exotic new vacation destination.

The question is, are tourists ready to boldly go?

Visit Qo’noS is running at Turteatern until March 24. Tickets are priced at $35.