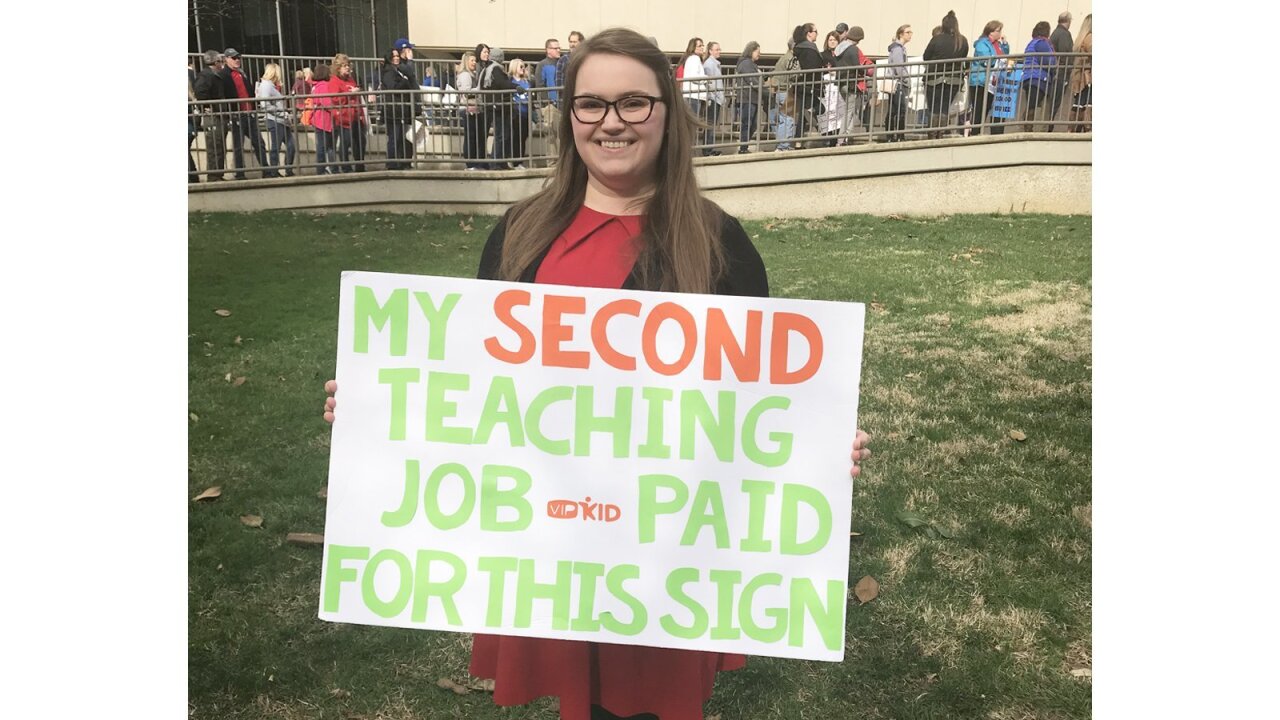 Tonya Spinella is a fourth-grade teacher in Mercer County, West Virginia and is protesting for better pay and benefits.

The West Virginia legislature argued for hours but could not agree Saturday on how much to raise teachers’ pay — meaning the teachers strike may well extend into an eighth day Monday.

About 20,000 teachers have been on strike since February 22, keeping 300,000 students out of the classroom. Teachers’ unions have vowed their members must receive a 5% pay hike before returning to work.

The impasse capped a day of emotional arguments, often witnessed by a large, vocal crowd of teachers and their supporters.

“We’re being penny wise and pound foolish,” state Sen. Ron Stollings said on the Senate floor. “We need to invest in education.”

Senate President Mitch Carmichael and other Republican legislators maintain the state cannot afford raises that would end the walkout by some of the lowest-paid educators in the country.

The state Senate approved a bill Saturday night to decrease proposed pay raises from 5% to 4% — a move which infuriated the teachers. The bill went to the state House, which rejected the Senate version. The House had earlier approved a 5% pay raise.

Is the raise doable?

The Senate spent part of the day debating whether the money could be found.

Sen. Roman Prezioso, a supporter of the bigger raise, said a difference of one percent amounted to $13 million that could be secured from other agencies.

But Republican Sen. Gregory Boso, who proposed the 4% raise, was skeptical.

“For numbers to appear out of a meeting and show up on our desks saying all of sudden the numbers are there … as far as I’m concerned it’s about this worthless,” he said. He put his trash can on his desk, crumbled paper and dropped it in.

Mixup in the Senate

At one point, it looked like the Senate had accidentally given teachers what they wanted.

The state Senate thought it had approved a bill for 4% raises. But a House version of the bill had somehow been entered into the Senate voting system, said state Sens. Prezioso and Mike Woelfel.

Members of the Senate didn’t notice the switch and the Senate ended up voting to give the teachers a 5% raise, Prezioso and Mike Woelfel said.

After the mistake was discovered, the Senate went back into chambers to figure out how to reverse the situation, and at first it was unclear if there were enough votes to do so, and if the parliamentary regulations would allow it.

But the procedural matters worked out for Senate leaders; the real bill with the 4% raise was voted on again, and passed. The second and third readings passed 19-13.

Teachers will not go back to work without a 5% raise, Dale Lee, president of the West Virginia Education Association, said earlier in the day. The WVEA is one of three organizations representing the teachers.

The next step will be a legislative conference made up of members from both chambers. It’s not known when the conference would meet, but it could be as early as Sunday.

The conference would mostly likely be made up of a three-member team from each chamber.

Each team would probably comprise two Republicans and one Democrat to reflect the reality of GOP majorities in each chamber. The House and Senate picked their members Saturday night.

The legislators would have three days to complete the conference, but they can vote to extend that time period. Members to the conference would be appointed by each chamber.

The conference could meet Sunday, though the Senate itself voted to reconvene Monday.

A Senate finance committee vote earlier in the day drew boos from an overflow crowd of teachers and supporters who watched a livestream from the Senate committee room.

“We’ve got to end this. I think we pass this bill as is and get our kids back in school Monday,” he said, drawing applause from teachers and supporters in the gallery.

The House bill proposed a 5% pay hike for teachers in the first year — more than the 4% total raise (spaced over three years) the Legislature initially passed.

The deal did not include an immediate fix to the state health insurance plan, the Public Employees Insurance Agency, or PEIA, which employees say requires them to pay premiums that are too high. The status of PEIA was a major reason for the strike, according to educators.

The bill also covers a pay raise for state police.

The teachers are eager to return to work but need more than a promise by the Legislature, Joe White, executive director of the West Virginia School Service Personnel Association, told CNN.

“What people have got to understand is that this is not something that has happened overnight,” he said Friday.

“This is something that has accumulated over the years. And (teachers and service personnel have) been lied to. And the trust factor, right now, is kind of slim. … What we’d like to see is things go back to normal, and they live up to an agreement and we move forward.”

Questions about the money

Legislators, however, remain unsure about the financing.

The hike proposed in the bill hinges on new projected state revenue numbers that the governor announced earlier this week.

Carmichael has said he finds the projections hard to believe and wants to examine them more closely.

“We are absolutely bound by our duty to evaluate that with a fine-tooth comb,” he said. “We’re very skeptical.”

The proposed deal also called for the creation of a task force to address union concerns over the public employees insurance program.

Justice appointed the first members of the task force Friday and announced they will meet for the first time on March 13.

Teachers and service personnel have been on strike since February 22, shutting down public schools across the state for seven school days.

Educators, school staff and their supporters have descended on the state Capitol, holding daily rallies outside legislative chambers where they chant “55 United,” a reference to West Virginia’s 55 counties. Local pickets have gone up across the state as well.