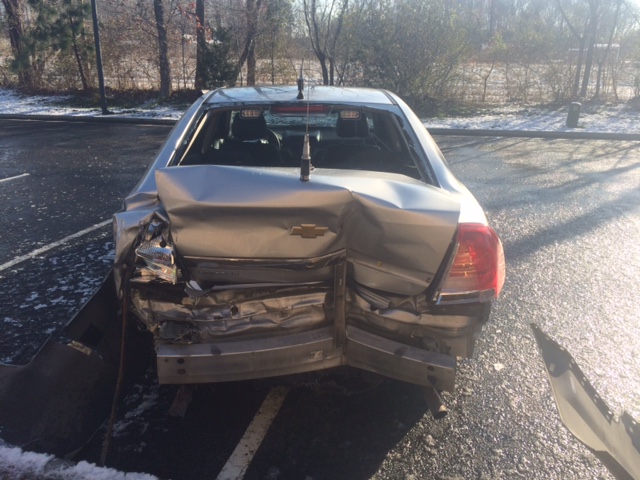 NEWPORT NEWS, Va. – A Virginia State Police Trooper’s vehicle was struck by a Ford F-150 on Tuesday morning as the Trooper was rendering assistance to another motorist.

Virginia State Police say Trooper J. Napier had stopped his vehicle on the Victory Boulevard overpass at I-64 to assist the driver of a Chevy S-10 Blazer that had spun out of control due to the icy conditions and ended up on top of the grassy median.

Trooper Napier pulled up behind the S-10 Blazer with blue lights and hazard lights on.

While Trooper Napier checked on the driver, Hillary Sweeney, a Ford F-150 hit the Trooper’s vehicle from behind, pushing it into the S-10 Blazer.

Both Trooper Napier and Sweeney were outside of their vehicles at the time and were not injured.

The driver of the F-150, Kenneth Smoker, remained at the scene and refused any medical treatment. He was charged with Reckless Driving/Failure to Maintain Control.