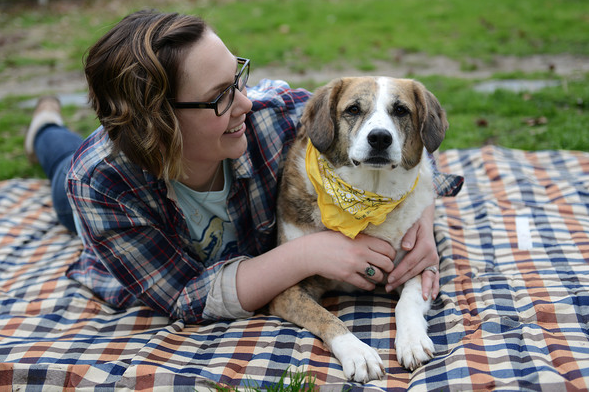 JOINT BASE LANGLEY-EUSTIS, Va. – U.S. Air Force Tech. Sgt. Katie Gar Ward didn’t even know where Sarajevo was before her deployment. Now the Balkan city will hold a special place in her heart for helping her find purpose during her mission.

The media operations NCO in charge of the 633rd Air Base Wing Public Affairs office at Joint Base Langley-Eustis was deployed to Bosnia and Herzegovina in October 2014. When she fell in love with a homeless dog roaming the Bosnian streets – on a street coincidentally named “Ward’s Way” – she knew right then her first deployment would be much different than that of her husband’s eight-month tour in Iraq in 2010.

“Most of the street dogs in Bosnia are very leery of people, so I knew this dog was different,” she said. “She walked up to me, rolled over on her back, tucked in her feet, wagged her tail and just looked at me for affection.”

Ward and her husband had daily conversations about the dog, whom she named Tanzie. She told her husband she wanted to bring Tanzie to the U.S. to find her a good home. Naturally, Tanzie ended up with the couple.

“I pretty much knew she was going to be ours because once Katie gets attached, there’s no separating them,” said Ward’s husband, Walker. “It says something about the kind of person she is to bring back a dog from halfway around the world and bring her into our family.”

After befriending local Bosnians who rescued street dogs, Ward created a Facebook page and an online fundraiser to help the rescuers buy food and get veterinary treatment for the animals. With the help of a nonprofit through the social media site, she helped send nine dogs from Bosnia to new homes in the U.S.

Ward said her Facebook page and fundraisers received so much positive feedback that her friends encouraged her to create her own nonprofit to help the rescued Bosnian dogs. Her foundation celebrated its second anniversary as an official charity in February, and her work has helped rescue and find homes for more than 200 dogs.

She said the experience changed her as a person and sparked a new passion.

“Never in a million years would I have imagined my life as it is now,” she said.