Emboldened by support from across the country, Oklahoma teachers swarmed the state Capitol for a second week in their unrelenting quest for more school funding.

And by some accounts, Monday’s crowd was the biggest yet.

Some teachers walked 15 miles Monday to get to Oklahoma City.

They bring the support and advice of West Virginia teachers, whose nine-day strike last month led to a 5% pay raise.

“When talking to West Virginia teachers, they told me the most important day of the walkout was the 2nd Monday,” posted Alberto Morejon, the organizer of the “Oklahoma Teacher Walkout – The Time is Now!” Facebook group. 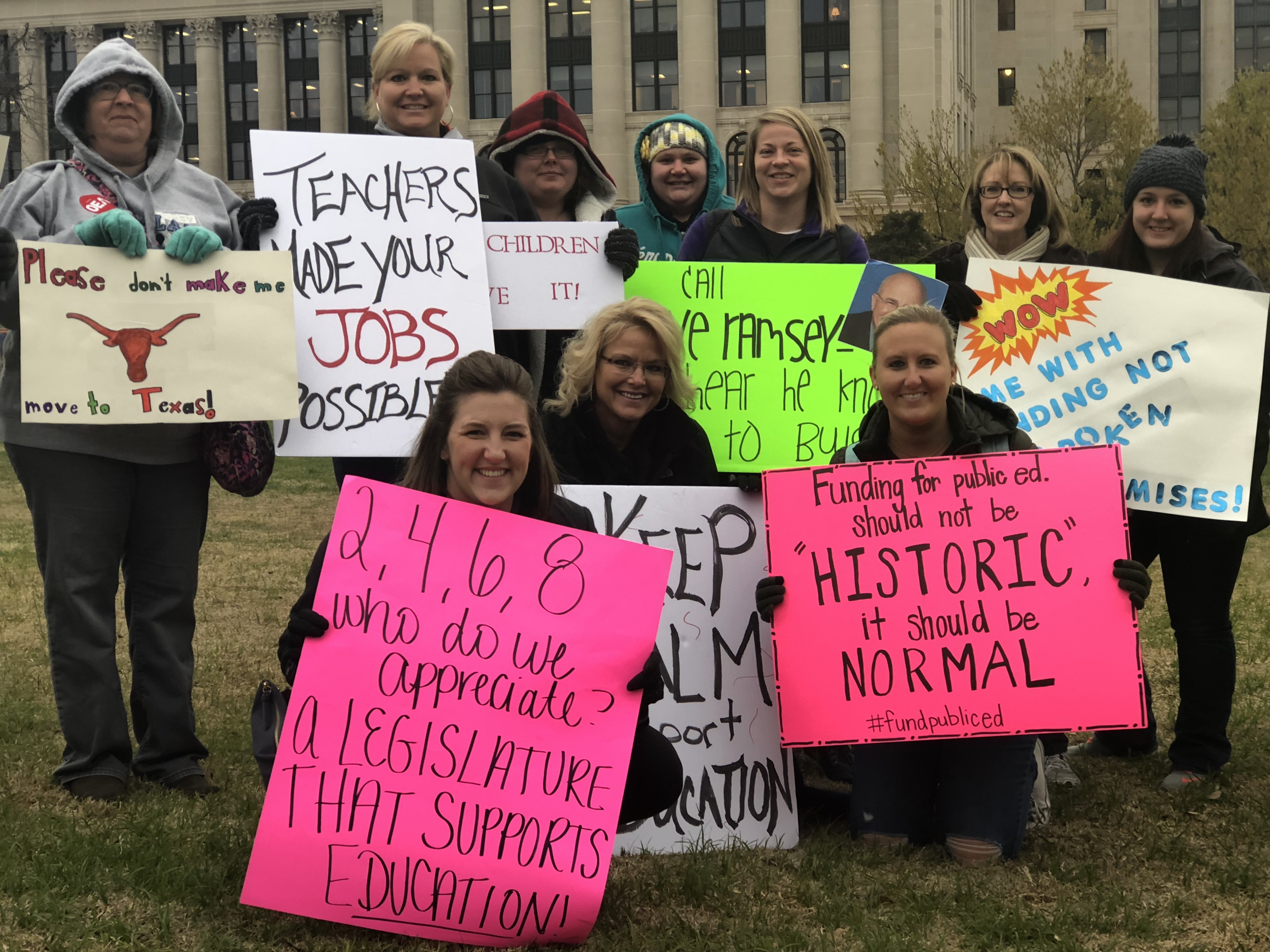 The teachers’ massive protest has already yielded some action by legislators.

Shortly before the April 2 walkout, Gov. Mary Fallin signed a bill that provided $50 million in funding for schools, increased teachers’ salaries and gave pay raises to support staff. But the package wasn’t nearly as much as educators demanded, so major school districts shuttered and the walkout ensued.

Now, two pieces of legislation could soon become law, getting a few steps closer to what teachers say they need:

1. The state Senate approved a bill amendment Friday that would require third-party retailers selling through outlets such as Amazon to collect sales tax from customers or inform them how much they owe in sales taxes. (The House approved the measure earlier in the week.) That bill could bring in about $20 million annually in education funding, but teachers say schools need a total of $200 million over three years.

2. The Senate on Friday approved a “ball and dice” tax for gambling. While Senate leaders said it will not add any income to this year’s education funding, the Oklahoma Education Association said it would help in the long run.

But the OEA was livid about another Senate move: the repeal of a hotel and motel tax that it said would be paid by mostly nonresidents and would add millions in revenue.

The Senate followed the House’s lead and repealed the tax as part of Bill 1010XX, thereby chopping $43 million from the education funding bill. Senators say they can make up that shortage through other revenue in the bill.

What will it take for this to end?

While thousands of students remain out of school indefinitely, OEA President Alicia Priest made clear what she thinks lawmakers must do to end the teacher walkout.

She said Fallin must veto the Legislature’s repeal of the hotel-motel tax, and the Legislature must pass a bill ending the state’s capital gains tax deduction.

Until then, don’t expect teachers to end the walkout.

“I think it will continue … until they see the fully funded education bills that need to be passed,” said Kingsgate Elementary Principal Karie Hill, one of many administrators who joined teachers at the Capitol.

Kentucky teachers are furious, too

The Oklahoma protesters join teachers from Kentucky, Arizona and other states who have been fighting for more pay, better education funding and improved working conditions.

In Kentucky, teachers also protested the passage of a pension bill, which they called a “bait-and-switch” move.

That bill, which would affect new teachers, is at Gov. Matt Bevin’s desk. Supporters of the bill said the changes are necessary to save the state’s pension systems.

An analysis of that bill by the Institute on Taxation and Economic Policy found it would bring a huge tax cut for the richest 1% of residents, while the biggest tax increase would affect those making less than $21,000 a year. A fellow with the Kentucky Center for Economic Policy described it as “a tax cut for Kentucky’s richest people paired with a tax increase for the middle class and the poor.”

Bevin has until legislators return to session April 13 to sign the bill.

Until then, the Kentucky Educators Association has urged its members to return to their classrooms.

“Our students need us to show up for them in classrooms and schools,” the group posted on Facebook over the weekend. “We urge educators statewide not to allow our united efforts to be compromised by continued calls for action that deprive students, parents and communities of the educational services we provide.”