After three years of construction, the world’s largest cruise ship just set sail from Barcelona, Spain, on its inaugural voyage around the Mediterranean.

But the ship’s record-breaking size isn’t its only claim to fame. 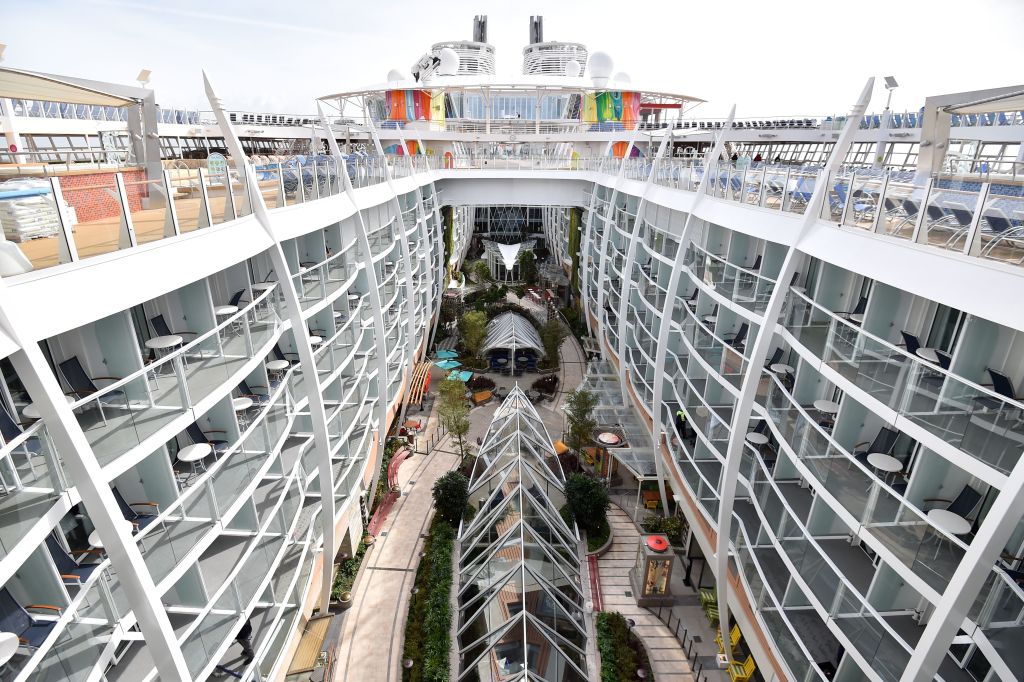 is home to the tallest waterslide at sea, the ocean’s fastest Internet and more works of art than the Louvre has paintings.

“The most surprising and memorable thing for me was that first sight of the ship — seeing how big and immense it is,” Balwin Yeung, Royal Caribbean’s director of sales and marketing in Hong Kong, tells CNN Travel.

“You can actually see it the moment you almost step out of the airport in Barcelona, since the port is just 10 to 15 minutes away. It makes a huge first impression.”

As the world’s largest cruiseliner by volume, Symphony of the Seas stretches 1,188 feet long and is filled with 22 restaurants, 24 pools and 2,759 cabins.

“Eight out of 10 of the largest ships in the world were built by Royal Caribbean, but this one really pushes the envelope,” says Yeung.

“At the same time, you don’t really feel crowded because there are 18 decks on the ship. It’s like a building, right? There are 24 elevators and seven neighborhoods. Each neighborhood has its own personality, so it tends to naturally segregate the crowds.”

“Neighborhoods” such as the adults-only Solarium lounge or leafy Central Park aim to provide a refuge, whereas a dedicated Splashaway Bay water park is packed with families.

“Others will like the Boardwalk, which is much more outdoorsy and fun for families with a carousel.”

For daily dopamine hits, the new cruise ship provides an ambitious lineup of performances and thrills.

Peppered around the vast deck, there’s a glow-in-the-dark laser tag, an “Escape the Rubicon” puzzle in a custom-built escape room, rock climbing wall, surf simulators and a nine-deck-high zip line.

But the jewel in the crown is the spiraling “Ultimate Abyss” slide — the tallest on any cruise ship to date, at 150 feet above sea level.

Featuring a 10-story drop, the serpentine slide winds toward the deck below at a steep 27-degree incline, which takes about 13.14 seconds from top to bottom to descend.

Also on board, dance and musical enthusiasts can settle in to watch boundary-pushing acrobatics and high dives at the AquaTheatre or head to the Royal Theatre to experience an upbeat rendition of “Hairspray.”

“Actually my favorite part of the experience was the shows,” says Yeung. “It’s beautiful to see the outdoor dives at the back of the ship, with all the lighting and the music and professional acrobatics.”

When it comes to accommodations, the most over-the-top is the “Ultimate Family Suite.”

Meanwhile, the adults in the eight-person duplex will gravitate toward the private balcony and whirlpool.

Should travelers need an extra hand, a butler — dubbed a Royal Genie — will look after the entire family, while an “Instagrammer-in-Chief” is on hand to ensure guests snap shareable pictures.

This year, the ship will be traversing the Mediterranean with voyages to Palma de Mallorca, Spain and an Italian sojourn to Florence, Pisa, Rome and Naples.

Come autumn, Symphony of the Seas will move its home base to Miami, Florida, and launch a series of Caribbean cruises.

On the itinerary? Stops in Bora Bora or perhaps a “Perfect Day at CocoCay” — a private island owned by Royal Caribbean that’s home to the tallest waterslide in North America, hot air balloon rides and the largest freshwater pool in the Caribbean.

Of course, massive cruise ships often draw ire from conservationists due to their impact on small communities and less developed destinations.

Yeung says the mega ship will stick to well-oiled tourist destinations, where there’s an existing infrastructure to handle an influx of travelers.

“This summer, the Symphony is sailing one of the most popular and common Mediterranean itineraries, stopping in established tourist destinations such as Rome and Naples,” says Yeung.

“These places are very experienced with tourism and hosting guests from ships. We’re not cruising to any small villages.”