Desperate Virginia father searched for wife and son after tornado: ‘The wall was gone’

AMHERST COUNTY, Va. - A Virginia family says they're thankful to still have each other after a tornado ripped through their Amherst County home Sunday night.

“We lost just about everything,” said Michael Cooper, whose home was reduced to rubble.

An EF2 tornado touched down in Lynchburg and Amherst County Sunday night, according to the National Weather Service.

Cooper recalled the moment when the tornado hit his home like a freight train.

“If you ever lived above train tracks, when the train goes by it kind of felt like a train,” he explained.

During those terrifying moments, the only thing Cooper could think about was his family, he told CBS 6.

“I ran upstairs, and I looked, and the wall was gone,” said Cooper.

He searched and searched for his wife and seven-year-old son, to no avail.

“I couldn't find them because they were in a blanket,” said Cooper.

He found them covered in a corner next to what was once his bedroom.

"The biggest thing you want to do is make sure your family’s safe,” said Cooper. “This stuff can be replaced, it’s just stuff, but your family you can’t.”

While their lives have been uprooted, the family is grateful that they still have each other and their neighbors.

“Everyone is safe, that’s all you can ask for,” said Cooper’s stepdaughter Megan Kirchner. “It’s just a house, you have memories, but you have those memories. You have the people that go with them so that’s what matters.”

Friends and family set-up a GoFundMe account to help the Coopers recover from their loss. 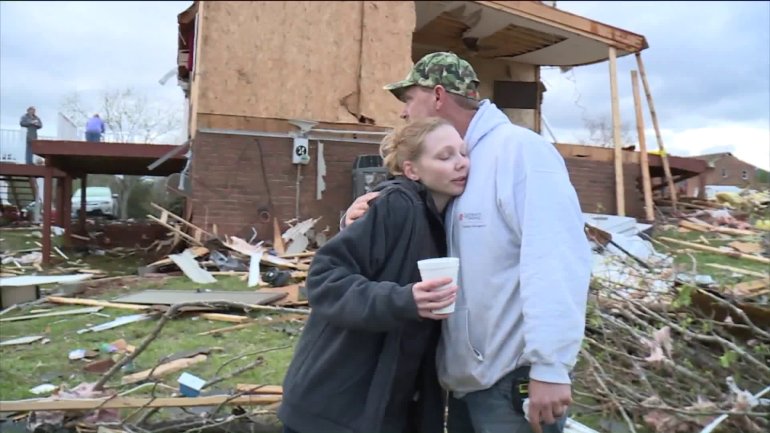