Kim became the first North Korean leader to step into South Korean territory since 1953 on Friday morning, crossing the line that separates the two Koreas at the demilitarized zone (DMZ) in a highly choreographed moment that was beamed live to the world.

He was greeted by President Moon before walking along a red carpet to the Peace House for the first meeting between the leaders of the divided Koreas since 2007.

The two leaders appeared at ease, smiling and talking, and on entering the Peace House Kim signed a guest book, where he wrote “a new history begins now” and “an age of peace, at the starting point of history.”

Kim and Moon have a full day of talks that are expected to focus on three subjects with worldwide implications — the denuclearization of the Korean Peninsula, a peace settlement and the improvement of bilateral relations. 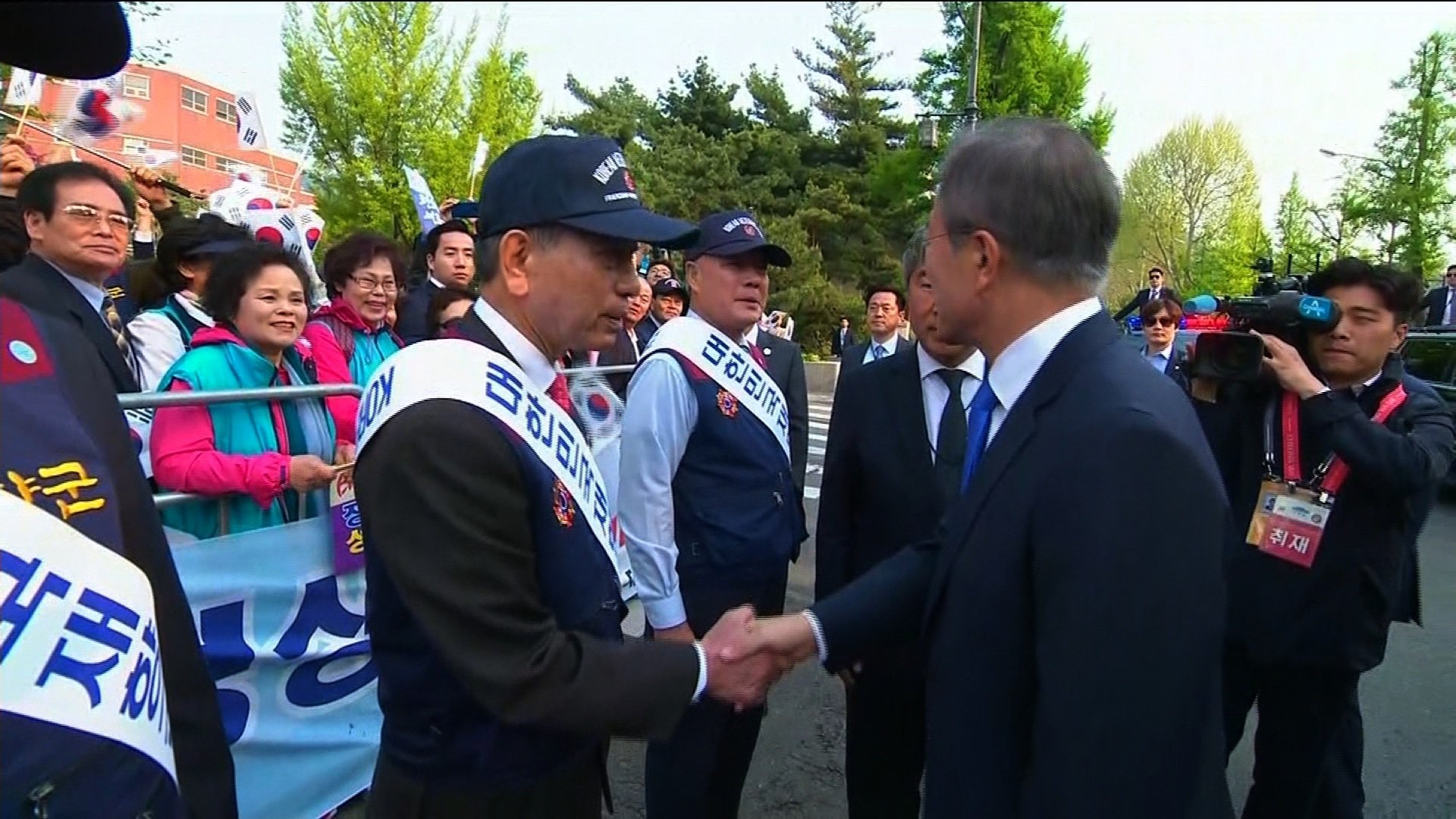 Sitting at the oval table before the talks began, Kim said he wanted to write a new chapter in Korean relations.

“As I walked over here, I thought ‘why was it so difficult to get here?’ The separating line wasn’t even that high to cross. It was too easy to walk over that line and it took us 11 years to get here,” Kim told Moon and the gathered officials.

Moon praised Kim’s “courageous and bold decision” to sit down for talks.

“Over the past seven decades we weren’t able to communicate, so I think we can talk the whole day today”, Moon said, drawing laughs from Kim.

The North Korean leader was accompanied by his sister Kim Yo Jong, who led the Pyongyang delegation to the 2018 Pyeongchang Olympics and has been playing a more visible role in North Korean politics.

The summit is the result of months of diplomatic wrangling and negotiating on the part of Moon, a longtime advocate of peace between the Koreas. It will also set the stage for the first meeting between a sitting US president and North Korean leader when Donald Trump and Kim meet in late May or June.

In a White House statement issued on Friday morning, the Trump administration said it hoped the talks “will achieve progress toward a future of peace and prosperity for the entire Korean Peninsula.”

However, stakes are high and some observers are doubtful the two sides can bridge the gap created by 60 years of antagonism and suspicion.

The summit is being broadcast live on screens across the South Korean capital of Seoul and residents gathered at a railway station applauded and cheered when Kim crossed the Military Demarcation Line line and shook hands with Moon.

“It’s a historical moment I wanted to be with the public the moment I watch it,” Ji Kwang-jin told CNN.

At the media center in Ilsan near the DMZ, where more than 2000 international and local journalists are gathered, there was an audible gasp as people caught their first sight of Kim, who was wearing a black Mao suit.

The day has so far proceeded without a hitch although in an unscripted moment, Kim invited Moon to step into the northern side of the DMZ.

Kim received a full welcoming ceremony, including a military band in traditional dress which played the Korean folk song “arirang,” well known in both North and South Korea.

Huge banners have been displayed across the South Korean capital of Seoul proclaiming “Peace, a new start” amid speculation the two leaders could discuss signing an official peace treaty finally ending the Korean War.

Crowds of supporters, holding signs calling for denuclearization, waved off the South Korean President as he left his residence in Seoul.

Kim would “open-heartedly discuss” all the issues with Moon, and was entering talks with the hope of “achieving peace prosperity and reunification of the Korean Peninsula,” North Korean state media KCNA said.

Officials across the world, especially in the United States, will be paying close attention to any specific agreements by Kim relating to his nuclear arsenal.

While Kim has in recent weeks publicly endorsed denuclearization, what exactly he means by the term and how it would take place has been left extremely vague.

Japan’s Defense Minister Itsunori Onodera said the North Koreans needed to make clear commitments on its nuclear and missile programs. “I would like to keep close eyes on … this summit and find out if it is leading to concrete action,” he said on Friday morning.