VIRGINIA BEACH, Va. - You might not recognize sections of Chic’s Beach now that the Chesapeake Beach Restoration project is underway.

It’s about halfway done and the beach looks much different.

The affected area extends about one mile along the Chesapeake Bay from Joint Expeditionary Base Little Creek-Fort Story east to Joyce Avenue.

Life-long resident Beetle Bailey, who they call the Mayor of Chic’s Beach, and many others have waited more than two decades for this project to start.

“We’ve got a set of drawings and we have been showing people for months and months,” said Bailey, “but to see it altogether - very different.”

It took years but the $4.8 million plan finally got approved.

Bailey said the owner of Buoy 44, Stephen Michaels, played a huge role in speaking out and gaining momentum to get the support needed for the project along with several others in the neighborhood.

City officials and locals agree that the sand was desperately needed in this section of the city.

“At high tide and during storms there was no walkable beach whatsoever,” said Phill Roehrs, the City of Virginia Beach Water Resources Engineer.

Roehrs has been working for 15 years to make this restoration project a reality. He said the beach will be roughly 300 wide when the project is complete.

They’ve been working since last Sunday you can already see a big difference.

“You start looking at it and you can't stop,” said Bailey.

Roehrs said there are not a lot of companies that do this type of work. The Chicago-based group Great Lakes Dredge and Dock Company are running the project. He said the people who operate the large hydraulic cutter-head dredge and the tractors on the beach work specific jobs. They said they work very long hours.

“It's essentially vacuuming,” said Roehrs. “Then pumping the sand with water onto the beach and as the water flows off, the sand stays behind.”

All the work has caused a little bit of shaking in some homes along the water.

“People who live along the beach said the last couple nights their bed feels likes one of those old motel rooms were you put a quarter in the box and the bed vibrates, but they're not complaining,” said Bailey.

He said they are grateful to have better protection in the event of a storm and more space for beachgoers.

“What it does for recreation and for the community is priceless,” said Roehrs.

“I was here at 4:30 this morning. I'm like a kid at Christmas. I just can't believe it. I didn't think I'd ever live to see it happen and look at it; it's amazing,” said Bailey. 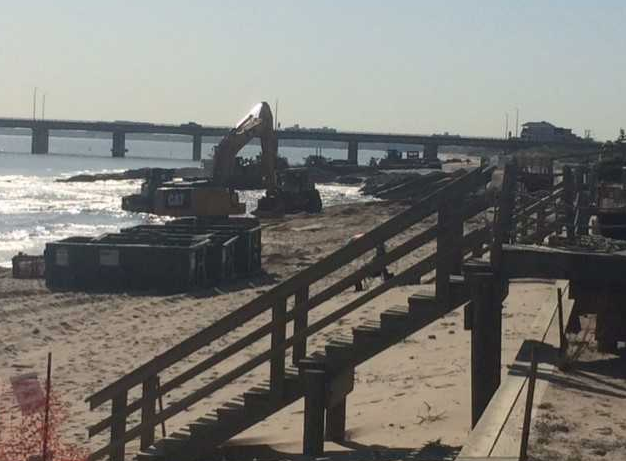