UPDATE: Dakota has been found! Click here for more details.

VIRGINIA BEACH, Va. - A Virginia Beach couple said someone kicked in their apartment door and stole their most precious possession - their French Bulldog.

News 3 met up with the two Navy Sailors Wednesday night. The couple said police came to their home and took fingerprints Tuesday.

Tearfully, Leah Bullock told us how the dog has helped with depression and anxiety.

“He just brightens up your day. You could have a bad day and you come home to him and everything changes,” said Bullock.

Her boyfriend, Joseph Schuessel, showed us where the door was kicked into their apartment.

“Whoever took him: know you basically took part of our life away,” said Schuessel.

They said it happened Tuesday around 2:30 at the Choices of Holland Windsor Apartments near Holland Road in Virginia Beach.

Schuessel said Denver and his crate were the only things missing from the apartment.

Denver has a brother named Jax who was also home when the break-in took place.  Jax is a one-year-old Bulldog.

“It’s a devastating feeling,” said Schuessel. “I go to work now and I literally sit there and think about where he could be or who he is with.”

Bullock said she is eight months pregnant, expecting her first child in June.

The couple said they are both active service members and can’t understand why someone would do this to them.

They don’t know if they were targeted.

“It's like a little piece has just been ripped from you,” said Schuessel.

“He helps me live. As crazy as that sounds, I know he's a dog, but I need him to come home. I want somebody to have a good heart and find him and bring him home,” said Bullock.

Contact Virginia Beach Police if you know where he is. 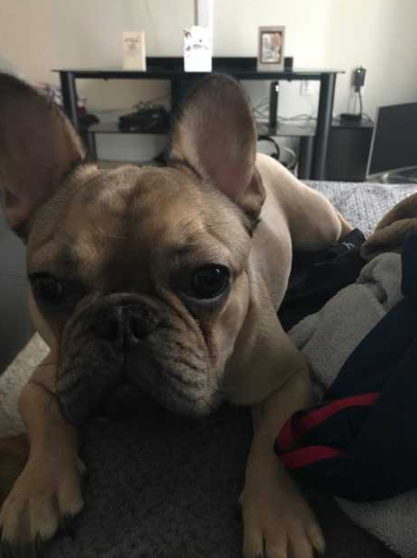