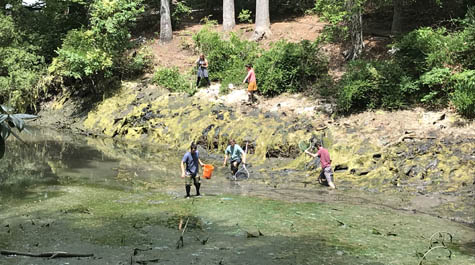 WILLIAMSBURG, Va. – The Crim Dell for many College of William & Mary graduates holds a special meaning after one swims or walks over it, but now, the iconic spot is in need of a face lift because of sediment that has set because of storm-water runoff.

This past week, facilities management at the university started to drain and dredge the 52-year-old location as part of biorentention efforts. While work has been done to Crim Dell in the past, this is the first time that it was fully drained since 1966.

Students, alumni and volunteers are helping in the project as well. This started off with the relocating of wildlife from Crim Dell, which included snapping turtles, water snakes and fish. This was done through an eight inch pipe that allowed wildlife to move down stream and through catch and release efforts by students through netting.

Officials from the university say that once Crim Dell was drained that they found a variety of items, which included bicycles, traffic cones and other items.

The next step will be for excavators to begin the dredging process of the project. Officials expect for 900 truckloads of sediment to be removed from the Crim Dell.

Other enhancements that will be done to Crim Dell are the adding of nine bubblers in the pond to keep algae from blooming, and also the trimming of over growth to the exterior of Crim Dell.

The Crim Dell enhancements are part of a larger project by the university’s Municipal Separate Storm Sewer System project for larger storm-water management. The project has been on going for multiple years.