Nearly four months after the Parkland, Florida, community was devastated by a deadly school shooting, seniors at Marjory Stoneman Douglas High School gathered on Sunday to receive their diplomas.

The community anticipated a bittersweet occasion, as students — dressed in maroon caps and gowns — and teachers planned to honor the 17 students and faculty killed, including four seniors who would have graduated today.

Ahead of the ceremony at the BB&T Center in Sunrise, Florida, MSD teacher Darren Levine told CNN the mood was somber.

“There’s definitely a solemn feel mixed with joy, which is weird,” Levine said.

The family of Joaquin Oliver, one of the students killed when a gunman stormed the school on February 14, planned to attend the ceremony. His father, Manuel Oliver, was expected to walk in place of his son.

And Hunter Pollack, brother of victim Meadow Pollack, was also expected to receive his sister’s diploma in her stead.

Some of the students decorated the slates of their caps with homages to their lost friends.

One of Meadow’s best friends, Carley Ogozaly, decorated her cap with a picture of Meadow and the words, “We are still in this together.”

Other students like David Hogg — who has become a prominent voice in the shooting’s aftermath — used their caps to make a political statement.

He shared a photo of his cap, painted orange, with a price tag that read “$1.05” on Twitter.

“Thanks for the tassel @marcorubio,” Hogg wrote.

Student activists wore similar price tags at the March for Our Lives rally in March as a dig at Florida Sen. Marco Rubio and the National Rifle Association. The figure is meant to represent how much each student in Florida is worth to Rubio, based on how much money he received from the NRA.

Students weren’t the only ones making a statement. Some teachers used orange lipstick to draw strips beneath their eyes as part of a campaign called the Lipstick Lobby. The lipstick was meant to draw attention to the issue of gun violence.

The mother of Carmen Schentrup, another senior killed in the shooting, also wore orange lipstick.

On Sunday morning, Jeff Foster, the AP Government teacher and grand marshal of the graduation, took to Twitter to let his students know they had his support.

“Today is going to be emotional,” he wrote. “Just know that I will always be there for you. I love you.” 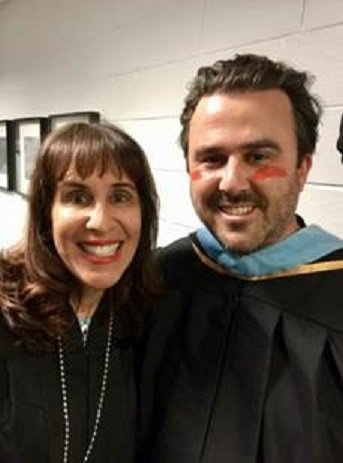