NORFOLK, Va. - The Norfolk Sheriff's Office has launched a new program using mindfulness and yoga to teach inmates better impulse control and decision-making skills. The effort is part of The Prison Yoga Project, which has more than 15 years of experience in jails and prisons nationwide.

In the noisy and loud jail environment, it can be hard to find peace. However, inmates are learning to take deep breaths and centering themselves. George Sutton has been practicing yoga for three weeks inside the Norfolk City Jail.

"I feel like it'll help me in a sense where I can perceive situations better opposed to just acting off impulse," said Sutton, who is serving time for simple assault and battery and a firearms charge among others.  "I definitely notice a change personally."

The Sheriff's Office hopes teaching inmates the skills of mindfulness and yoga ensures they return to the community less likely to commit future crimes.

The classes are taught by Christine Harrell, a certified instructor with The Prison Yoga Project. The initial class has 10 inmates and will last for three months. Harrell raised money to pay for the yoga mats, blocks and other necessities for the class.

"I'm about to throw a punch at somebody. If you do yoga you tend to catch yourself and step away. Is it worth it? Is it worth me going back behind bars?" said Harrell, who has been teaching yoga for more than a decade. Harrell said she felt a calling to close her studio and bring yoga to those who truly need it.

"I come across a letter my brother wrote when he was locked up and right there... this is what I'm supposed to do," said Harrell. She moved forward working to become a certified instructor with The Prison Yoga Project. Once a week, she comes to the Norfolk City Jail and spends an hour helping inmates with their yoga practice.

"It allows me to take deep breaths instead of just jumping off the gun and getting mad and angry," said Darius Cooper, who is serving time for a drug and firearms charge.

The program will last for three months before switching over to female inmates. The inmates said they can already feel a change. 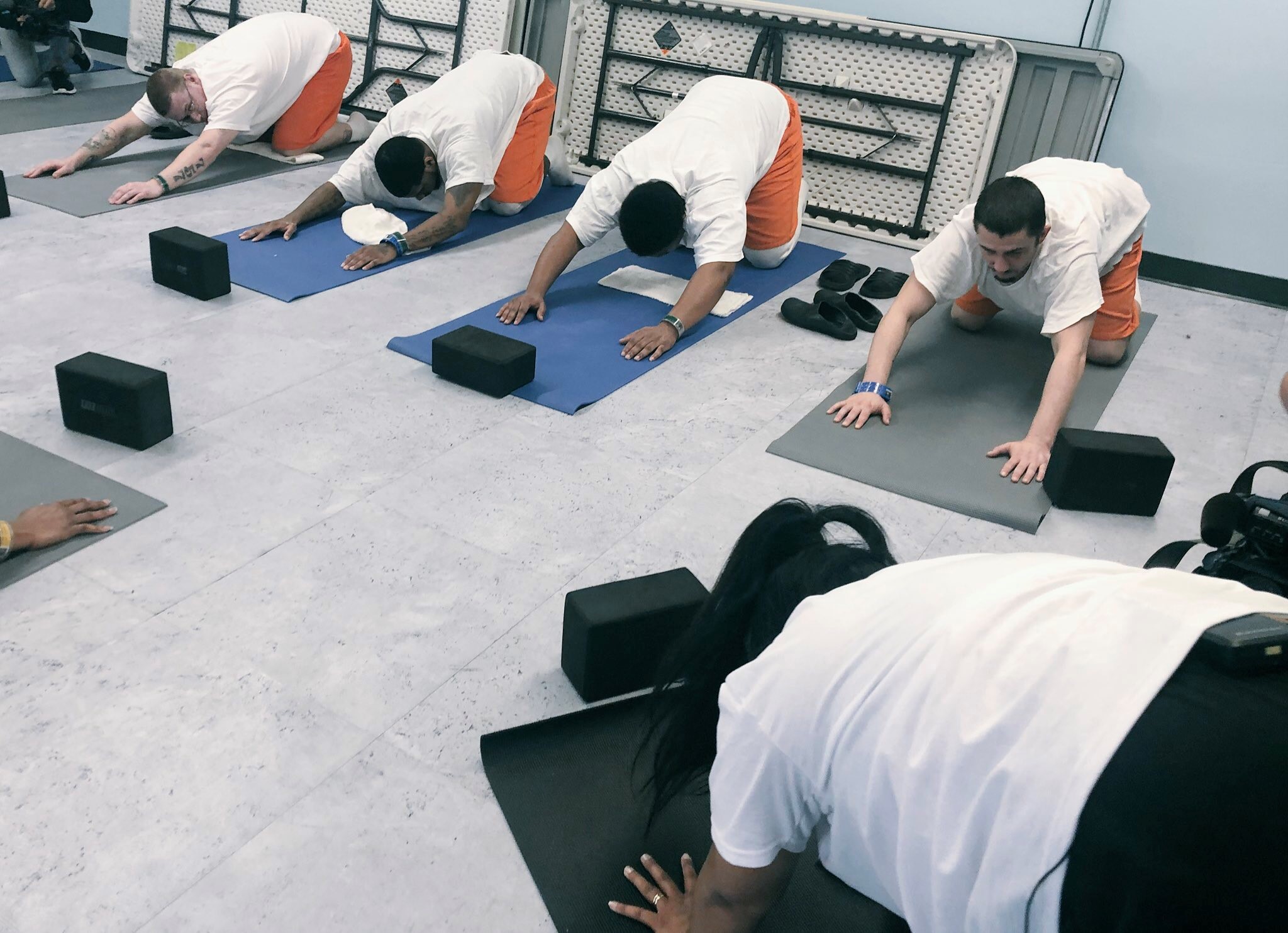 "Since I’ve been locked up and taking the class, I just overall rationalize things more better. Instead of before acting off of impulse. I don't act off as impulse as much. That's what I’m going to do when I get out. Don’t be so impulsive. Really value what it is I'm trying to do in life. Because I definitely have goals. I don't want to be just an inmate or repeat offender," said Sutton.

The Norfolk Sheriff's Office said, "Their lack of skills makes our community less safe. Without better options, many will return to the lifestyles that got them into trouble in the first place."

Another goal is to save tax dollars by keeping inmates from coming back to jail again.

Research shows teaching inmates meditation can have positive effects on their behavior and decision making, which translates into reducing recidivism. A 2002 study at Seattle's North Rehabilitation Facility found the recidivism rate dropped by 25 percent for inmates who took a 10-day meditation course.

A 2012 study by the National Council on Crime and Delinquency showed participants from The Prison Yoga Project reported a reduction of stress and anxiety, calmer temperament, emotional control and anger management and improved rational decision making.