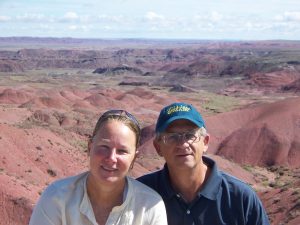 SAN BERNARDINO – A Williamsburg couple has been reported missing while visiting a national landmark in San Bernardino, California.

Officials from the U.S. Bureau of Land Management (BLM) notified sheriffs of a vehicle, which appeared to be abandoned, that had been parked at the Amboy Crater Trailhead parking lot for about 10 days. Rangers, along with the sheriff’s department, responded to the location and conducted an extensive aerial search of the area. They were unable to find the owners of the vehicle, who were later identified as the Schmeirers.

Investigators were able to determine that the Schmeirers left their home in Williamsburg on May 27 to go on a cross-country road trip. They were expected to arrive in Palm Springs, California, around June 2.

The San Bernardino Sheriff’s Department Morongo Basin Station conducted another search of the area on June 16 with the use of sheriff’s deputies, a sheriff’s helicopter, search and rescue volunteers and a search dog.

During the search, authorities found the human remains of a man who matched the description of William Schmeirer, however, the body has yet to be positively identified. The cause of death is unknown and is pending autopsy.

The search and investigation remain ongoing.