PORTSMOUTH, Va. - A 10-foot crack has formed in the main pillar of the Union Bank and Trust Pavilion after water got into three of the primary steel columns in the lower main mast.

The crack was initially found during the canopy's annual inspection. One of the columns had burst, similar to how water lines can freeze, swell and burst in the winter.

Friday night's Slightly Stoopid show was moved to the venue's waterfront plaza but it was because of problems noticed months ago not recent damage, according to a spokesperson from the company that manages concerts.

According to Portsmouth City Engineer James Wright, the city is taking multiple measures to stabilize the main mast, including installing a temporary support brace and removing the canopy.

All work on the pavilion to date has been to stabilize the main mast.

The current cost of its stabilization is around $200,000. 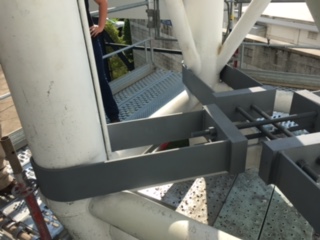