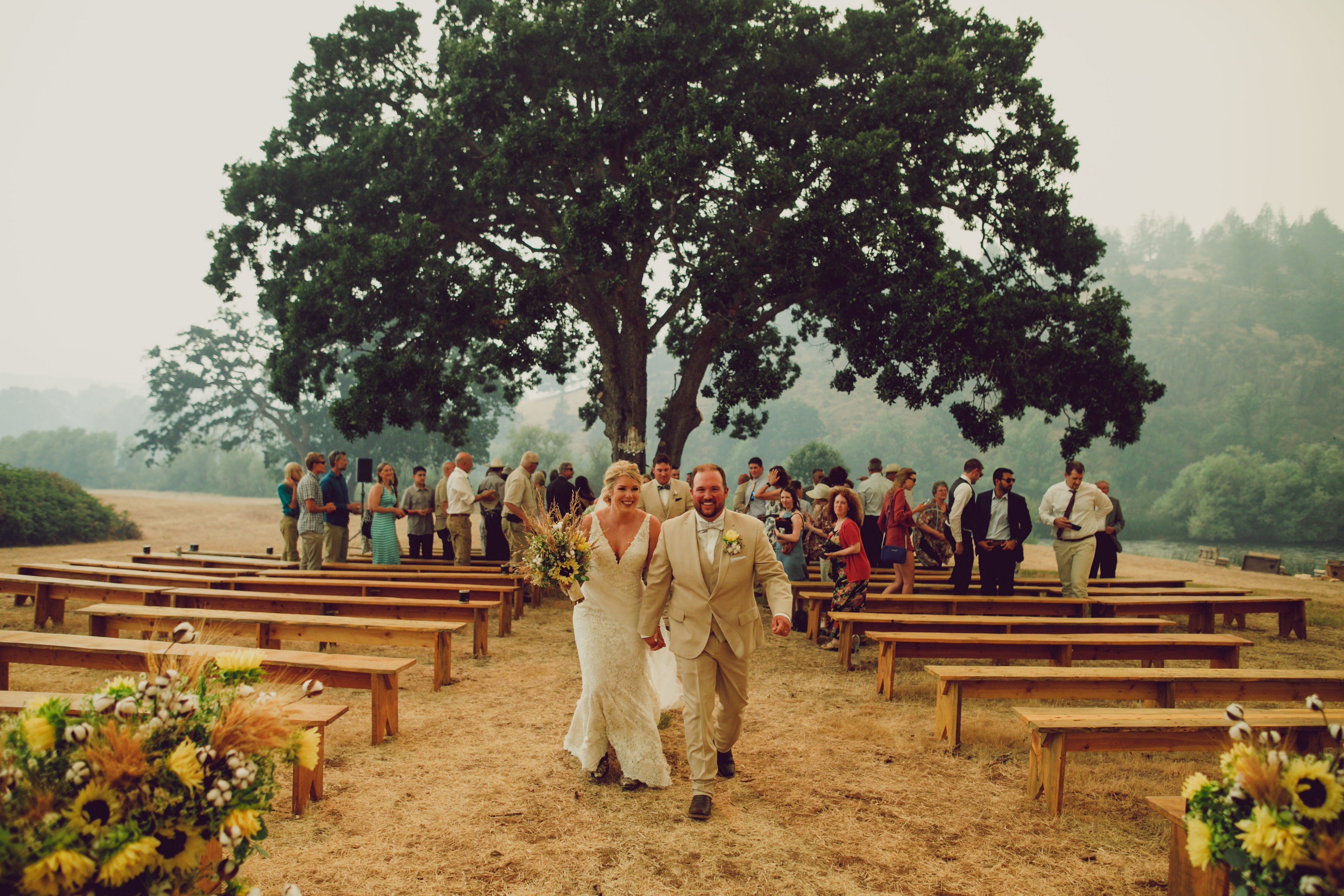 Two Sacramento-based wedding photographers captured the pictures of a lifetime on Saturday as the Klamathon Fire quickly spread near Hornbrook in Siskiyou County.

Dee and Kris Photography posted on Facebook Sunday- hours after they and the bride and groom (Ellie and Taylor Denney), wedding guests, and wedding vendors ran for safety.

The couple quickly said their vows and then everyone ran.

Dee and Kris Photography’s post read, in part, “Ellie & Taylor Denney may you only see the beauty in the ashes! These two said “I DO” and ran for safety from the #Klamathonfire In #Hornbrook yesterday, July 7th. Thank you to: Calfire Updates CAL FIRECAL FIRE Siskiyou Unit CHP – Yreka – Yreka a strike team manned the property as the fire jumped the river and they saved the home and all the rentals and vendors property. These men and women do God’s work! They put themselves into the line of danger so that life can continue as we know it. Having to run for your life as ashes fall around you in an uncontrolled wildfire as the winds pick up, will change your thinking regarding the sacrifices they all make on a daily basis. On behalf of the family & friends of Ellie and Taylor and all the vendors at this wedding – Dee and Kris Photography THANK YOU!!!”

According to Dee and Kris Photography, the vendors moved the wedding in under 20 minutes from the original location to the Yreka Holiday Inn.

“The Parson family built their cabins with the desire to have them built in time to host their daughter’s wedding. They worked tirelessly weeks leading up to the wedding day. They had evacuation plans in place as we arrived and they were in constant contact with the fire crews who gave them the go ahead as winds were low. It wasn’t until the couple’s first look when we saw signs that the day may have to change. Dark smoke was forming on the ridge across the river. We wanted to get as many pictures as possible before orders came down to evacuate so we rushed their romance pictures and shot their wedding party portraits. The fathers both decided to hold the wedding right then and there with the family that was already in attendance. The original start time wasn’t to be for another hour and a half but the couple wanted to share their vows on the families land. As the Ellie’s father gave her to Taylor we officially got word to evacuate. The vendors rushed to load whatever they could as the couple said ‘I DO’, they kissed and everyone RAN. The flames were rushing for the river as the winds were picking up speed. Vendors and family left belongings as there wasn’t time to safely gather everything. Unbeknownst to the family or friends a strike team was placed at the home and saved everything. They went above and beyond and everyone was grateful. The couple re-said their vows at the local Yreka Holiday Inn so that they could not only revel in their promise to each other but so the rest of their guests could witness their nuptials. The night ended with dancing, great food and much love.” – Dee and Kris Photography

The photographers posted the family evacuated as directed by fire officials. A guest wrote: “CalFire was aware of the situation and we evacuated as soon as we were told, as we promised–the fire literally changed direction at the last minute and we were not under an evacuation order till then. The road out was not in the direction of the fire.”

As of Monday afternoon the Klamathon Fire has burned more than 35,000 acres and is only 30% contained. You can check the status fire.ca.gov/current_incidents.