Don’t let your moles kill you

HAMPTON ROADS, Va. - At only 38 years old, Domenick Casuccio has already been diagnosed with melanoma twice.

Once at age 20 while he was in college at West Virginia University and again in November 2016.

Casuccio said he heard an ad by the American Cancer Society encouraging people to get their skin checked, so he did.

Casuccio had been monitoring a mole on his hip and didn’t like the way it looked, so his mother called the doctor.

He said the mole had stage two melanoma and the doctor needed to perform surgery to remove the section of his skin. Melanoma is a type of skin cancer that can spread quickly and be deadly.

Casuccio said he now has a nine-inch scar on his hip.

“I was thinking he was going take a little bit of skin, but no, it was a huge section," he said. "You’re scared because you just don’t know.”

The second time, he had a mole containing melanoma removed from the back of his ear.

Skin cancer is the most the common type of cancer, according to the Centers for Disease Control and Prevention. The latest statistics show there were 80,400 new cases of melanoma in 2015; almost 9,000 people died.

“Melanoma is dangerous because melanoma kills people. There’s been a real spike over the last couple years with the number of cases of melanoma,” said Dr. Craig Merrell with Plastic Surgery Associates of Tidewater.

Because News 3’s Margaret Kavanagh has a history of skin cancer in her family, she met with Dr. Merrell to have her skin checked out.

Kavanagh's father was diagnosed with melanoma and her mother also had a milder form of skin cancer.

Dr. Merrell used what’s called a Foto Finder to look at her skin. It takes digital images to analyze moles.

“When you can magnify a mole up to 500 times to see how it looks on the inside, that’s critical,” said Dr. Merrell. He recommended three moles be taken off as soon as possible.

Dr. Merrell said he thinks more people need to do a better job of monitoring their skin by looking for any changes or areas that bleed.

When it comes to prevention, experts recommend sunscreen with SPF of at least 50.

“The number one thing that you do is cover up when they can and wear some [sun] block,” said Dr. Merrell.

Experts say protection from UV radiation is important all year round - not just in the summer -  and avoiding indoor tanning is also crucial.

Casuccio said he thinks years of using a tanning bed to treat serious acne contributed to his melanoma. Casuccio now works for the American Cancer Society as the Director of Communications and said that message saved his life years ago.

Below is some information from the CDC on how to reduce your chance of skin cancer:

Protection from ultraviolet (UV) radiation is important all year round, not just during the summer or at the beach.

Protection from ultraviolet (UV) radiation is important all year round, not just during the summer or at the beach. UV rays from the sun can reach you on cloudy and hazy days, as well as bright and sunny days. UV rays also reflect off of surfaces like water, cement, sand, and snow. Indoor tanning (using a tanning bed, booth, or sunlamp to get tan) exposes users to UV radiation.

The hours between 10 a.m. and 4 p.m. Daylight Saving Time (9 a.m. to 3 p.m. standard time) are the most hazardous for UV exposure outdoors in the continental United States. UV rays from sunlight are the greatest during the late spring and early summer in North America.

For details about these options, see Sun Safety.

Click here for resources and information about skin cancer.

Casuccio is also raising money for the Relay For Life. You can give to the cause by clicking here. 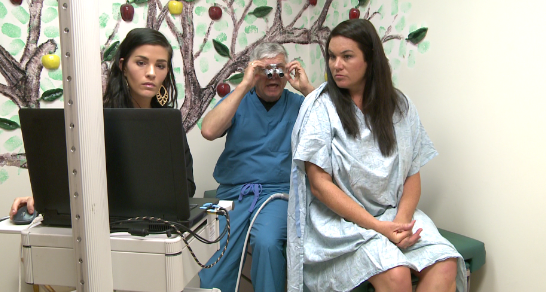