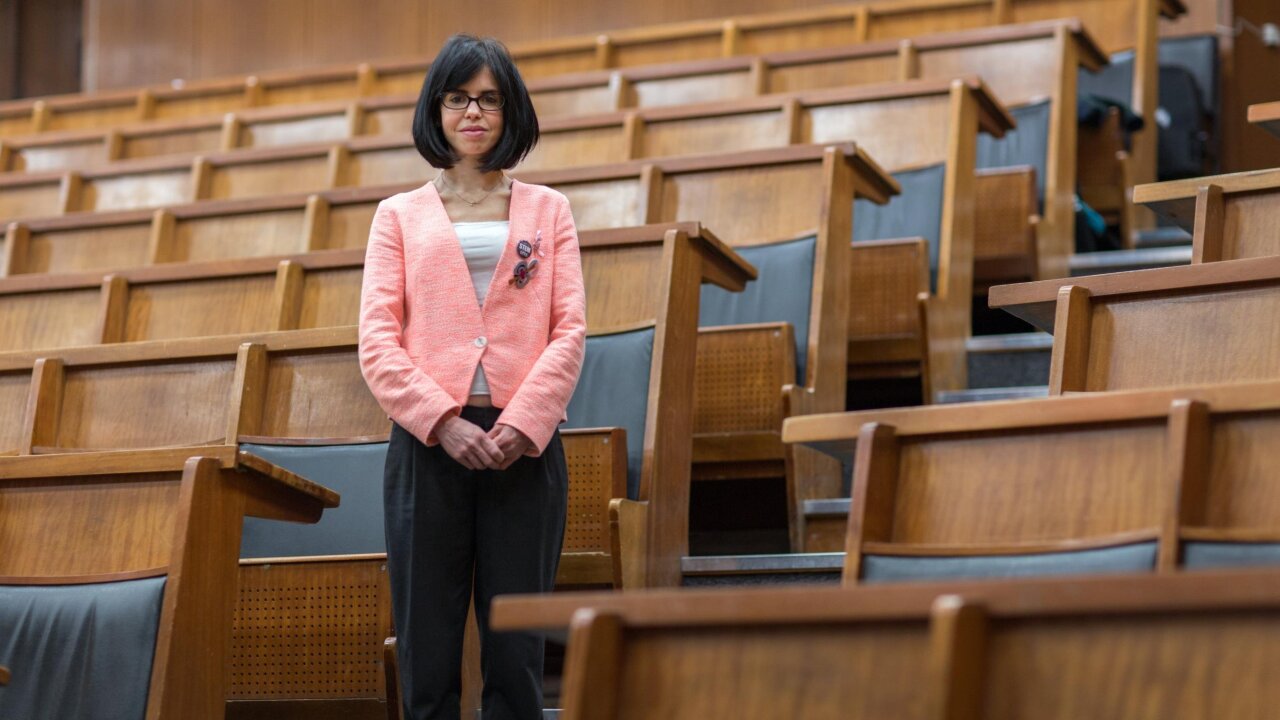 When she’s not working in a physics lab, one London researcher is making sure women in science get the recognition they deserve.

And she’s doing it one Wikipedia article at a time.

Jess Wade has written more than 280 Wikipedia pages this year, each highlighting a woman or someone from another group underrepresented in science, she said. She challenged herself to write one piece per day in 2018, and so far, she’s outpacing that rate.

“In writing them, you get so inspired and excited because these people that you are researching … are absolutely incredible,” Wade, a postdoctoral researcher in physics at Imperial College London, told CNN. “It’s such a fun thing to do that you get motivated to keep contributing to science because you want to be one of these phenomenal people one day.”

There aren’t many women with Wikipedia bios

Only 17% of Wikipedia’s biographies in 2016 were about women, according to the Wikimedia Foundation, the charity that runs the collaboratively edited, online reference project. And when you narrow it down to women in science, technology, engineering and math, often dubbed STEM, the numbers are even lower because women are underrepresented in those fields.

“When you look up a scientist, the first thing that comes up is their Wikipedia page,” Wade said. “But more often than not, women don’t have them.”

Wade wanted to do something that could help close the gender gap and increase the representation of women in the sciences. So, she started writing Wikipedia bios.

“I thought, ‘What could we do now to make sure that women are on an equal footing with men?’ and that’s where Wikipedia’s really useful,” she said. “It costs nothing for me to write a Wikipedia article, other than maybe an hour or an hour and a half of my time.”

She chose Wikipedia because people these days research life’s questions by Googling. Wikipedia articles, she said, are indexed quickly and appear near the top of most searches.

Meet a volcanologist, an immunobiologist and a particle physicist

Beyond her crusade to expand their recognition, Wade has become enthralled with her subjects.

Her favorite article she’s written is about Tamsin Mather, an Oxford University volcanologist whose research has sometimes proven dangerous.

“(Mather) went to Chile, Nicaragua and Italy and at one point was held at gunpoint. It was incredibly dangerous research,” Wade said. “She’s been really successful in her studies and has a really cool story and (is) really cool herself, as well.”

Then, there was Gertrudis de la Fuente, a Spanish biochemist who led the government’s commission on “toxic oil syndrome,” which killed more than 1,100 people after a mass poisoning in 1981. Her story was made into a film.

And Michael Johnson, assistant professor of immunobiology at the University of Arizona, who created the popular Black Science Blog.

Wade tweets out her Wikipedia pages and other articles about scientists. In turn, people tweet and email her suggestions of whom she should cover.

One of her latest writes grew out of a suggestion from Loyola University Chicago Associate Professor Robert McNees, who wanted to know about Frances Pleasonton. She was a particle physicist who was part of a team that measured the half-life of a neutron in 1951.

And sometimes, Wade gets to meet the people she writes about, such as 2017 TED fellow Elizabeth Wayne. Wade took the photo of Wayne that’s on the biomedical engineer’s Wikipedia page.

Diversity in science has been Wade’s passion for years.

She has sponsored seminars and workshops to bring hundreds of girls interested in science to her laboratory.

She is also trying to address the shortage of science teachers in schools, a problem that’s plaguing the United States and the United Kingdom. Not having enough passionate teachers with sufficient experience in the subjects they teach proves problematic, she said.

“(Students) realize that they may not want to do this subject when it gets quite difficult or challenging. At school, they want to be really good, so they don’t choose to study the subjects,” she said. “Then, they can’t choose that subject at university, … so we have this big skills gap in our country, and you have the same in America.”

She serves on the board of a UK group that works to foster more women in STEM, and she created the Women in Physics group at her university.

“We see science works better, science works faster, engineering works better when we have the biggest and most diverse range of people contributing to it,” Wade said. “We need everyone to help solve these problems because they’re bigger than anyone can physically imagine, and … we need every single scientist in the country, really in the world, to solve it.”

The industry needs to be more supportive to retain scientists, Wade argues. That means, in part, nominating people for awards and speaking engagements — and even creating Wikipedia pages for them.

“We need to get better at standing up for underrepresented groups’ ideas and putting them forward,” Wade said.

‘Not everyone in life needs a Wikipedia page’

There are some days Wade can’t write because she’s traveling. Other times, she authors several Wikipedia pages per day.

And her reach stretches beyond gender to other groups underrepresented in science.

“That might be a woman, an African-American, an LGBTQ+-identifying scientist,” she said. “It could be any of these people who so far haven’t been celebrated enough in the scientific community.”

Before Wade starts writing, she often checks with her subjects to make sure they want to be featured, she said.

“Some people do a controversial area of research, and it’s not the best thing that they have loads of publicity,” she said. Others decline because they’ve been trolled on social media, she said.

Her criteria for selecting subjects are based on the rules of Wikipedia, which has guidelines for what gets posted on its site.

“If a topic has received significant coverage in reliable sources that are independent of the subject, it is presumed to be suitable for a stand-alone article or list,” reads Wikipedia’s page on notability.

Wade’s only frustration with her project has been when her pages were deleted because the subjects weren’t notable enough, she said. She’s also meticulous about fact-checking and properly citing her sources to ensure the page meets Wikipedia’s standards.

“Not everyone in life needs a Wikipedia page,” she said. “We need to make sure that this is documenting the most successful and important thinkers of our time.”

Wade, who works in printed electronics and creates light-emitting diodes, said she doesn’t find herself notable enough as a scholar. Yet Ben Britton, an engineer in the Department of Materials at her college, created a Wikipedia page about her. And Wikipedia hasn’t deleted it.

“I know I’m not notable enough yet as an academic, and it has become a space for trolls to nominate me for deletion and basically discuss how rubbish I am!” Wade said. “I’m much happier talking about how great other people are other than anything I’ve achieved.”

‘We haven’t had a light shone on us’

The Wikimedia Foundation has acknowledged Wade’s work and featured her on its blog.

“Wikimedia UK applauds the work Dr. Jess Wade has done, not just to improve content on underrepresented women scientists on Wikipedia, but to do public outreach on this important issue,” Wikimedia UK said a statement.

Wade also has worked with Alice White, Wikimedian in Residence at the Wellcome Collection, a London library and museum, to help introduce people working in STEM to the Wikipedia community, that group said.

Maryam Zaringhalam, a molecular biologist who met Wade last year at a conference, is a leader of 500 Women Scientists, a grass-roots group that aims to make the scientific community more inclusive and has been boosting Wade’s Wikipedia work.

“I see articles saying, ‘Where are the women in science?’ I think that we’ve always been here but that we haven’t had a light shone on us,” said Zaringhalam, who also has written Wikipedia entries and said they take a lot of time and effort

“I think that (Wade) going through and digging up those stories,” Zaringhalam said, “it really speaks to the fact that we have always been here but we’ve been ignored or written out.”