Wednesday morning local soldiers at Ft. Eustis were among the first to test out the new Army combat fitness test. 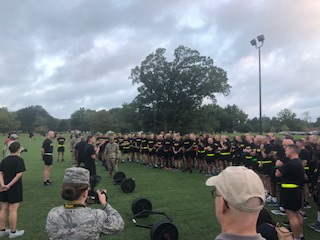 “The day I took it, I knew this is exactly what our Army needs,” Gen. Stephen Townsend said.

It’s a change over 30 years in the making.

"It’s about time. I’ve been doing the push-ups, sit-up’s and 2-miles run for decades now and it’s really not a good judge of the physical ability of the soldier,” SGT Maj. Keith Bishop said.

The APFT is out and the new ACFT is in.

The are going from a three-event test with push ups, sit-ups and a two mile run to a test that evaluates total body fitness and better combat readiness of a soldier.

“It’s going to improve our individual physical fitness but it’s also going to change the culture of physical fitness in our Army. We’ve known for decades that the current PT test is sub optimal for testing the rigors and demands, physical demands of combat,” Gen. Townsend said.

The test was six years in the making.

“Carrying a buddy, going over a wall. It’s those power movement it’s using the big muscles versus using the small muscles and hurting yourself definitely a better judgment,” Bishop said.

The new test starts field testing October 2018 and will become the standard of testing across the entire army October of 2020.